Over the last two decades, Security Information and Event Management (SIEM) solutions have become core components of the cybersecurity practices of enterprises large and small. As the source of truth for logs and events collected from across the enterprise's infrastructure, SIEMs analyze the constant stream of security events to look for anomalies and identify potential security incidents.

This constant stream of events is relatively predictable in on-premises environments. Naturally, as enterprises adopt cloud services and leverage cloud infrastructure – especially multi-cloud strategies – they still want to be able to benefit from SIEM solutions. However, traditional SIEM deployments were not designed with cloud principals in mind.

As with an on-prem environment, a SIEM can act as the consolidation point for all logs and events that are generated within cloud infrastructure. There are differences in the exact logs that can be collected, but all major categories are still in play, including network and access logs.

If you are using virtual or bare metal machines from a cloud provider, you’ll have syslogs. In addition, everything that runs in a virtual machine generates data that needs to be consolidated, as is the case with an on-prem environment.

When cloud services come into play, one of the biggest differences is the sheer number of different types of data sources that can exist – especially if you leverage platform-as-a-service (PaaS) and software-as-a-service (SaaS) offerings.

Every service creates some kind of event or raw log data that can be consolidated into your SIEM. All services generate logs that can be captured and analyzed by a SIEM, including services such as:

If an organization has an existing SIEM on premises, there are two options you can consider:

(See how Splunk monitors the cloud.) 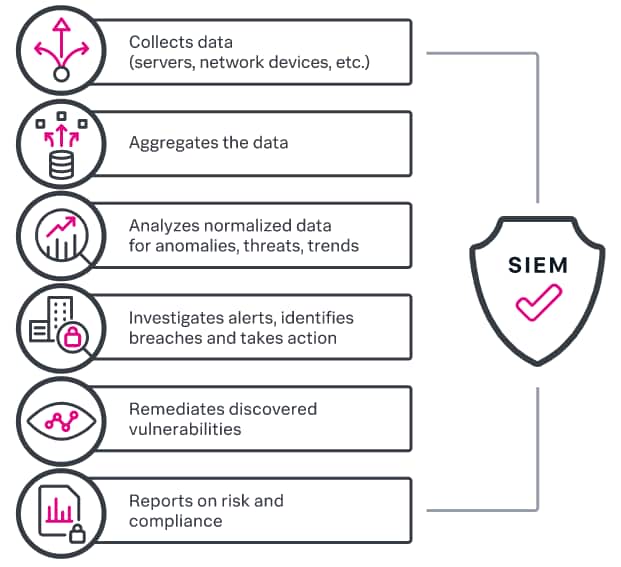 This leads us to the basic pros and cons of using an on-premises SIEM vs. using a cloud SIEM.

The pros of using an on-prem SIEM include:

The cons of an on-prem SIEM include:

The pros of a cloud SIEM include:

The cons of a cloud SIEM include:

(For the latest and greatest, check out these security conferences & events.)

Choosing SIEM for the cloud

Leading cloud SIEM solutions, including Splunk Cloud Platform, offer the same security monitoring capabilities as the self-managed and on-premises deployments that enterprises have grown to trust. Since cloud SIEMs are built with cloud native technologies in mind, they are constantly kept up to date with the latest features, and they can scale on demand to match the usage patterns of any given enterprise.

In addition, cloud SIEMs shorten implementation times, reduce the complexity of maintaining SIEM deployments and eliminate expensive capital investments that would be required for installing and upgrading an on-premises solution.

This article was written by Vince Power. Vince is an Enterprise Architect with a focus on digital transformation built with cloud enabled technologies. He has extensive experience working with Agile development organizations delivering their applications and services using DevOps principles including security controls, identity management and test automation. You can find @vincepower on Twitter.

This article does not necessarily represent Splunk's position, strategies or opinion.