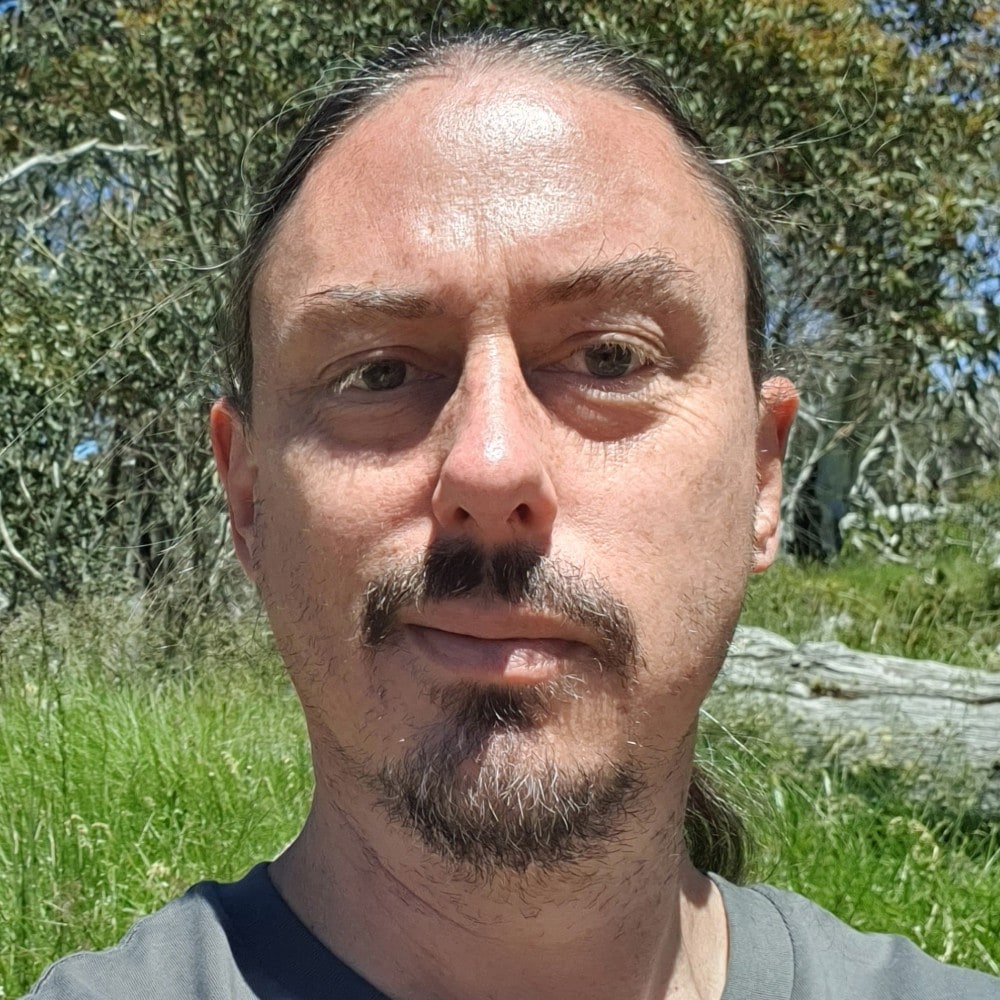 I love Data. Insights a good data-set can provide about even mundane subjects can be amazing! I also don’t have a driver’s license, in fact, if I were on the road regularly, everyone’s insurance premiums would rise. So when I heard that Logitech and McLaren had teamed up to produce the Logitech McLaren G Challenge and that Splunk was invited to provide race analytics, I realised that this was an opportunity to do something incredible, with an incredible data set, and hopefully learn something about this whole driving thing in the process…

In this post, I’ll introduce you to the Logitech McLaren G Challenge and walk you through how we instrumented racing simulators and leveraged Splunk Enterprise to provide high fidelity insights into both the drivers and the tracks they’re racing on.

The Logitech McLaren G Challenge is a premier sim-racing esports event inviting thousands of sim-racing enthusiasts around the globe to compete for dominance in Sports Car on Assetto Corsa Competizione and Open Wheel and Stock Car on iRacing.com. The challenge spanned six-monthly regional challenges for each category, with racers competing for one of ten spots in the Grand Finals. The Grand Finals live broadcasts saw more than one million views and Splunk was pleased to partner with Logitech and McLaren to be the official partner for data-driven insights!

The live race footage and replays provide for compelling viewing and were accompanied by witty commentary to keep the audience plugged into the action. Our task was to dig deeper into the race and provide perspectives that aren’t easily apparent just by watching the action. We know who won and who lost, but who was fastest in each sector, which corners were most dangerous, where do the overtakes occur!? We saw cars driving at breakneck speed and turning left in the NASCAR circuits, but which drivers were successfully using the tow line to maximise their speed? How much of a boost did they get? Accidents happen, but is there a fair trade-off for taking risks?  How many places does an average incident cost? These are all questions we looked to answer by taking a closer look at the data.

Getting The Data In… Fast! 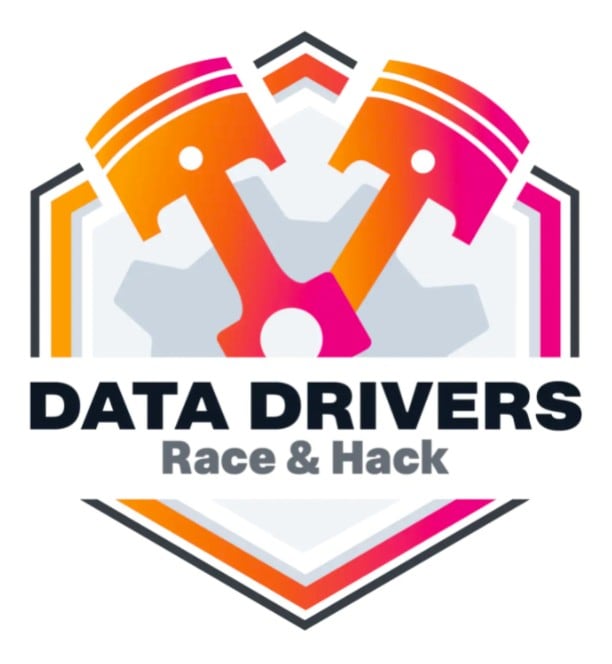 Splunk is a great real-time platform. We can handle real-time data, at volume, in nice friendly structured formats, or as messy unstructured text. This is great because a car careening down a track at 200 MPH travels 293 feet every second. That’s a lot of track, entire corners can be missed in 293 feet… There’s also a lot happening in that car, steering, throttle and brake inputs, roll rates, G-Forces, tire temp and tire wear.  To make sure we understood both what’s happening to each driver at the same time as understanding where that driver is we extended a script, previously created in a Data Drivers hackathon to stream 300 metrics 10 times a second into Splunk Enterprise via our HTTP Event Collector (HEC).

Interpreting All This Data…

OK, so we now know where every car is, and what they’re doing every 100ms, but is that section a corner? A straight? What sector is the car in?  Was there an accident… Or an overtake?  Luckily Splunk can interpret streams of data and understand changes that show events taking place, and enrich data with contextual information… Like whether a section of track is a straight or a corner.

Drive Slowly, And Hold Up Traffic? I Can Do That!

The grand final took place on 4 circuits: The Hockenheimring, and Red Bull Ring for the open-wheel challenge, and The Indianapolis and Daytona Speedways for the NASCAR challenge. To really understand the tracks we set up our own iRacing rigs to stream data into Splunk, and carefully, responsibly, and above all else, slowly, drove around each track streaming data into Splunk stopping at the entry, apex and exit points for each corner. This gave us wherein each track the corners are and allowed us to enrich the streaming data with which corners a car is navigating using a handy lookup file!!!

Well, we know where a car is. We know if it’s in a corner, and if so which corner it’s on. We also know its position, incident count and a plethora of other metrics. What we want to know is where and when these change. With the power of SPL, we’re able to compare metrics within sections of time series data with their neighbours. Using this we can see if a car’s position has suddenly decreased, or if its incident count has increased. Suddenly we can see where and when, and on which corners overtakes and accidents occur!

I Feel A Draft (But Don’t Smell A Wumpus…) 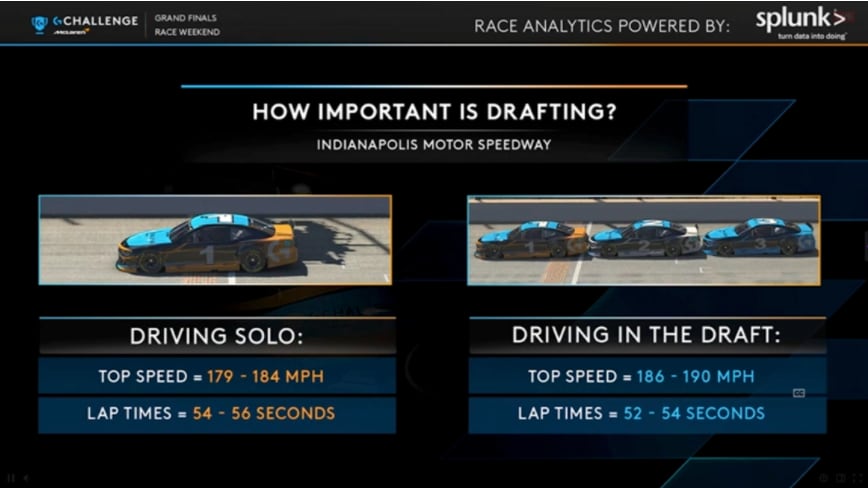 This was tricky. Cars are affected by changes in airspeed and turbulence caused by other cars in close proximity, and this is simulated accurately within iRacing. In open-wheel races, it can affect the ability of a driver to successfully take a corner, while in NASCAR a column of cars traveling together will be ~5 MPH faster than any car traveling alone (Even the lead car!!!). The iRacing metrics tell us how far along the track each car is and how fast they’re going, but not whether they are “In Tow”, or whether they are directly in line with each other (They could be on different sides of the road…). Again, SPL to the rescue! As we have granular time measurements, and the position of each car, we can establish whether the closest car is within 15 to 30 feet for each driver and define that as driving within proximity. We then look at the maximum speed for cars driving close together and those that aren’t, if we see that maximum speeds are higher for cars in close proximity we can determine that that driver is successfully using the draft effect!

Rubbing Is Racing, Or So We’re Told… 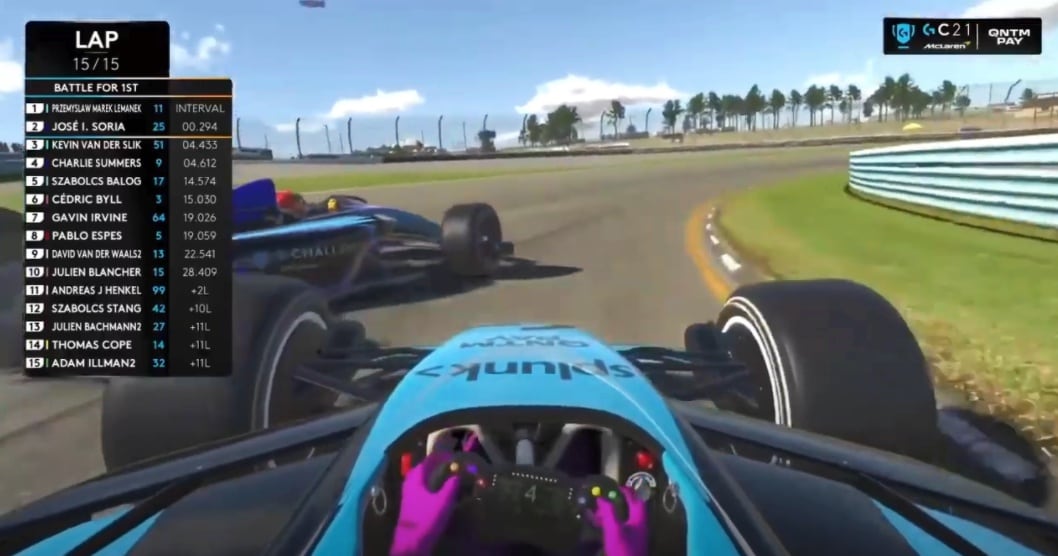 According to Harry Hogge in Days of Thunder, “he didn't slam you, he didn't bump you, he didn't nudge you... he *rubbed* you. And rubbin', son, is racin’”, but can we measure this? It turns out; yes. We’ve already detected incidents between cars, and we’re working with time-series data, so the question instead becomes, “what is the average number of positions lost in the seconds following an incident?”, and this can easily be calculated for each driver to show who could get away with the odd accident and drive on for the win!

Bringing It All Together

We’ve pulled data from iRacing at high speed and fidelity. We’ve enriched the data stream with critical track information, and identified important events that occurred during a race. All that was left was to bring the data together in a broadcast friendly format. The Splunk Dashboard studio is purpose-built to make data presentation easy, readable and attractive at the same time.

The Open-wheel grand final was held in two heats on the Hockenheimring, and the Red Bull Ring circuits, and there were some interesting surprises. Looking at the track sectors, we saw that drivers would excel at different sectors, and while only one driver would win the race other drivers would drive some sectors significantly faster than the overall winner!

Looking at where incidents and overtakes have occurred in the track we also uncovered an interesting anomaly in the Hockenheimring. The first corner shows a high count for both incidents and overtakes. This stood out as unusual, but when we looked back on the race data, this corner was placed just after the start line, and the majority of the overtakes and incidents were caused by drivers bumping and grinding past each other around this corner as they slowly started to separate along the track.

The NASCAR grand finals were held on very different tracks. As a non-driver, I would have thought the Indianapolis Speedway, a flat circuit with no banking on the corners, would have had numerous incidents, however, the opposite turned out to be true! The Indianapolis course only had three drivers that were involved in any incidents, and while some drivers were able to use the draft effect to their advantage, the final winners neither drove in close proximity nor had accidents suggesting that the crux to this track was successfully navigating its flat corners. Within the Daytona track, with fast well banked turns, we can see where rubbing carries risks with up to 6 places lost per incident, and at the same time we observe how driving in close proximity shows clear speed advantages for some of the leading drivers, particularly Nick Ottinger.

Please take some time to check out our race highlights here:

And if you’d like to watch replays of the grand final races, they’re available at https://www.youtube.com/c/LogitechG. 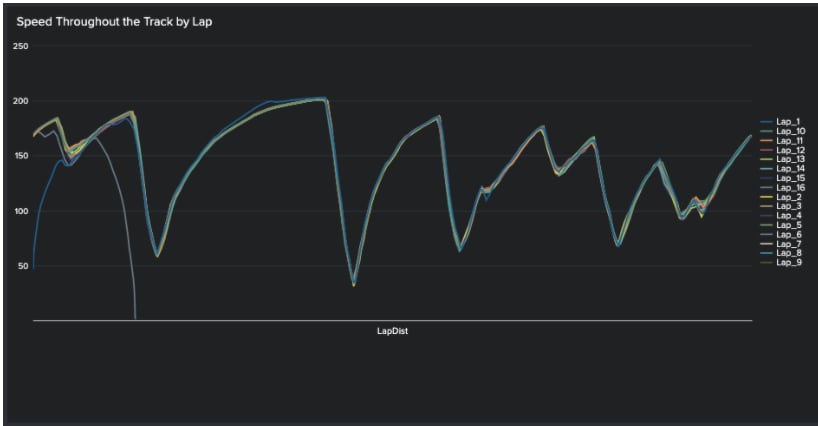 As happens, looking at the data raises further questions. We’re now working on analysis to understand what a perfect lap might look like by piecing together the best lap sections from a number of races and a number of different drivers to help guide track strategy, as well as conducting analysis to provide insights into which corners matter the most and how to tackle them, and so much more… But that will have to wait for another post :)

As a final note… Did I learn anything, and will I finally get my license? The short answer is yes, and maybe. I’d be the first to admit that most of what I learned during this experience is more likely to help me lose a license than gain one, but it has motivated me to get started again!

Thanks To The Logitech And McLaren Teams!

The whole journey from core concepts through to analytics and presentation during the Grand Final weekend was an epic experience. I would like to extend my sincere thanks to both the Logitech and McLaren teams for inviting us to be involved. I can’t wait for next year’s event, and to see how deep into the data we can go!

Matt is a Staff IT Markets Strategist at Splunk and an avid wrangler of machine data. Prior to working with Splunk, Matt spent his days working with telephony solutions and wishing there were better tools to understand them than telnet and notepad++
In his spare time, Matt talks to his dog and occasionally terrifies flying instructors. Matt previously experimented with living aboard and restoring an old yacht, but after the reality of cold showers and early mornings, now appreciates living on land with central heating and broadband.