We are excited to announce the availability of the Splunk App for HashiCorp Vault. Using this app, organizations can seamlessly ingest and visualize performance metrics and audit logs in Splunk to investigate, monitor, analyze and act on Vault data across DevSecOps use cases.

With the Splunk App for HashiCorp Vault, you can get insights on the following:

Vault Infrastructure: Vault performs infrastructure intensive operations. Offloading the burden of encryption/decryption from applications to Vault can be CPU-intensive, especially when done by several concurrent threads from multiple microservices. Vault can handle most demanding applications on a massive scale; however, it is vital to monitor performance metrics on CPU utilization and saturation as if the CPU is too busy, it may not be able to process new requests, thus impacting the end-user experience.

Keeping tabs on Disk IO and saturation is important, so you know that your storage infrastructure has adequate resources.

The same goes for monitoring Network metrics. Vault keeps a detailed log of all requests and responses. Because every operation with Vault is an API request/response, the audit log contains every interaction with Vault, including errors. Vault offers multiple audit devices, including a local file or logging over the network using the Socket audit device, Splunk HTTP Event Collector (HEC), for example. Vault operations will get impacted if it cannot write to the logging system. It is, therefore, critical to monitor the health of network performance. Splunk App gives visibility into network performance metrics for Vault clusters.

Vault Internals: Vault collects various runtime metrics about the performance of different libraries and subsystems. Splunk App uses this telemetry for getting a better view of what Vault is doing.

Lease metrics: For every secret, Vault creates a lease and metadata about the secret such as its time to live (TTL) and whether to renew it. Monitoring lease metrics gives visibility into how often secrets are getting used. A sudden spike in leases eligible to expire indicates an increase in traffic to the application. On the other hand, an unexpected drop could mean Vault can't keep up with the requests.

Resource consumption metrics: Additionally, it is important to note how much resources are consumed by Vault such memory allocated, available and used by the system. Pay attention to time spent in garbage collection; tune memory availability as necessary to minimize GC pauses. Number of Goroutines indicate the load on the system and a sudden change in this metric can point to a system-wide issue.

Other operational metrics: Monitor core Vault metrics such as latency to list, get, put, delete secrets in/out of storage, login requests, checking tokens, ACL fetch, etc. as they add to the latency to fulfill Vault requests.

Vault provides an audit trail to see who has requested data to identify and prevent any unauthorized access to your data proactively.

Tokens are the core method for authentication within Vault. Splunk app provides you granular visibility into the number, lifespan, type of tokens and authorization methods. You can isolate tokens with long time-to-live (TTL), identify users or services with such tokens and advise DevOps teams with best practices of using ephemeral tokens with short TTL whenever possible.

Keep an eye on the usage of secrets by application services, batch processes, automation tooling and other Vault clients. Splunk App provides insights into how many secrets are in the Vault system, who is accessing them. You also get out of the box visibility into the number of requests by path, role name, entity id, and errors by path so you can proactively correct applications accessing invalid path 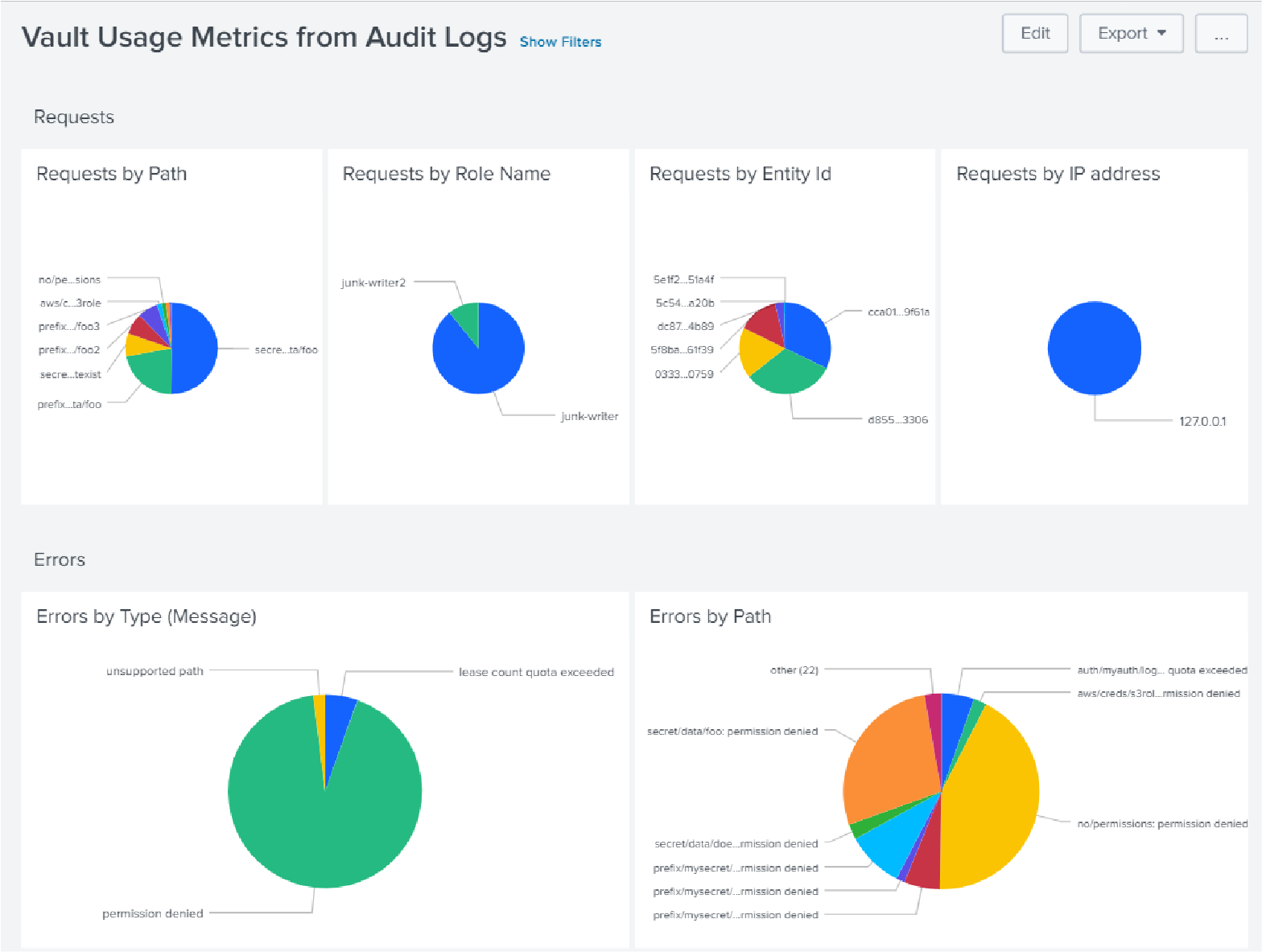 Getting started with Splunk App for HashiCorp Vault is straightforward. Install the app from Splunkbase for your Splunk Cloud or Splunk Enterprise environment. HashiCorp provides step-by-step instructions on how to configure data inputs and indexes to get data into Splunk. Additionally, the guide is full of practical recommendations on considering the right metrics to monitor, setting thresholds and estimating normal ranges. Read more about the Splunk App and see it in action.

Join Mark Gritter and Darshana Sivakumar from HashiCorp at the Splunk DevOps Insights and Innovation Virtual Event on July 22nd, 2020. In their session, they will cover Vault use cases and operationalizing Vault with Splunk App. Register here and save your spot. We look forward to seeing you there!

Amit Sharma is the Director of Product Marketing at Splunk. He has over twelve years of experience in software development, product management, and product marketing. Before joining Splunk, Amit led product marketing at SignalFx, AppDynamics, and Cisco. He did his MSCE from Arizona State University and an MBA from UC Berkeley Haas School of Business.