Hands on Lab: Sandboxing with Splunk with Docker (from .conf2017)

This is the first in a series of posts covering Splunk-related activities you can do from the comfort of your own...workstation.

This particular topic was presented at .conf2017 as a Hands on Lab by Burch entitled Sandboxing with Splunk (with Docker).

You can use this blog to get started with Sandboxing and Docker without any prior experience or knowledge. However, if you want to learn more you can check out .conf2016's Your Splunk Sandbox and .conf2017's Sandboxing with Splunk (with Docker). Both of these presentations are great background material.

Why Bother with a Sandbox?

Usually, someone who needs a sandbox has been saying things like:

"I'd like to get to the bottom of odd phenomenons and unexpected behavior, but I'm scared to break my environment."

"The more work I put into my environment, the more hesitant I am to try new things."

"I need a proper testing environment to try out new ideas."

"I'd like an environment where I can just see what happens, without worrying about crashing." 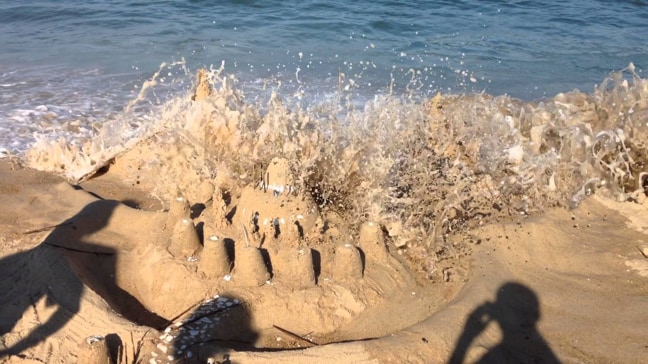 Setting Up Your Workstation

I suggest using your local workstation (laptop/desktop) machine. While you certainly can use a remote host, you should recognize that you may be introducing too much complexity. This burden of use could discourage you from using the sandbox altogether. If you are using Docker, it is much preferred to host the Docker environment locally. I would argue that the costs (e.g. disk space, admin exception) are well worth the benefits.

Navigate over to Docker's official website and follow their instructions for downloading and installing docker on your target machine. At the time of this writing, there's a "Get Docker" menu on top of the page that will get your started and pass you along to a few different pages before you get the download going.

Remember, Docker is a different company and different product than Splunk. So if you run into problems with this part (navigating, downloading, and installing) you'll want to peek at the Docker documentation and/or work with Docker, not Splunk. OK, back to the fun!

Get the Splunk Enterprise Docker Image

The Splunk Enterprise Docker image is hosted on the Docker Store. Unlike the online stores we're used to, there's nothing to download on that particular page. Instead, you'll see instructions including the docker pull command for having your Docker install fetch and download the Splunk Enterprise Docker image. Follow those instructions and soon enough you'll see the component pieces of the image being downloaded. It'll look something like this:

You can even validate what images you have with docker images.

Important Note
In Docker, instances are referred to as containers. Throughout the rest of this blog post, the terms instance and container will be used interchangeably (they're the same thing).

Here's the simplest command to start up a new Docker container (instance) of Splunk Enterprise:

But let's break down the parameters in this use of the docker command by showing the parameters description from docker help run along with its relevance for the Splunk image.

Connect to the Splunk Docker Instance

Great! So...where is that Splunk instance we just created? Well, this is where the docker container command comes in handy. For example, if I run docker container list -a I'll see the following columns in my output. Here's the relevance of each of these headers:

OK, I promised I'd elaborate on that one, since the notation might be a bit new to you. But fear not! It's really quite simple.

You'll probably see something like this, but with different numbers to the left of each '->':

If you've gone cross-eyed, take a step back. You should see that we've just got ourselves a collection of port pairings...and you might even notice some of the right-hand side ports look very Splunk-y. What happened here is Docker has made those ports available for you to access from your machine, but randomly assigned to different ports.

This reassignment might seem annoying if you're used to installing Splunk on your local machine but trust me, it is a huge benefit! Imagine having dozens or hundreds of Splunk containers all running at the same time. You don't need to mess with port conflicts! The instances can all run simultaneously without you having to administer different ports! Boooya!

Now let's look at each individual pairing. We've got:

It's saying that if you go to the left side of the arrow (->) Docker's networking mapping magic will forward those requests to the port listed on the right side of the arrow as the specified protocol. Let's look at the following example:

While you can certainly use SplunkWeb to make changes to the environment, you'll probably get to a point where you want to manually edit .conf files or save your work from the container. This is where things get a bit annoying. That's because the Docker container doesn't have much installed out-of-the-box, not even vi/vim! So, while you can explore the container's terminal using docker exec -it <container name|id> bash, you might not want to given other options.

I probably sound a bit crazy right now, but the reality is that in order to be successful we need to keep our work entirely separate from our sandboxes. This will allow us to destroy our sandboxes and rebuild without a worry in the world. With that in mind, I prefer to mount a folder from my desktop into the container as a Splunk app. By mounting that folder as a volume, I can manage the contents (add/remove/edit files) with my preferred navigator (Mac Finder, Windows Explorer, terminal, etc...) and my preferred editor (vi, SublimeText, Notepadd++ etc...). Since the folder is mounted as a volume, the changes I make locally are reflected within the container.

The syntax for this is the -v option when I first instantiate the container. docker help run informs us that this parameter is used to Bind mount a volume. An example of the syntax is if we insert within the run command:

In this example, local_app is the folder on my system and container_app is how it appears on the container's filesystem. Notice that it's slipped into the docker help run between other parameters but before we call out the image (splunk/splunk).

Don't forget that like with other Splunk config changes, you'll want to restart for the changes to take affect. While you can use the WebUI restart controls, you can also apply a restart by restarting the docker container with docker stop <container_name|id> or docker start <container_name|id>.

Phew, that's a lot. Let's pause here and review a cheat sheet I put together of what we've covered thus far. (Fair warning: The URL in the subtitle may no longer be accessible) 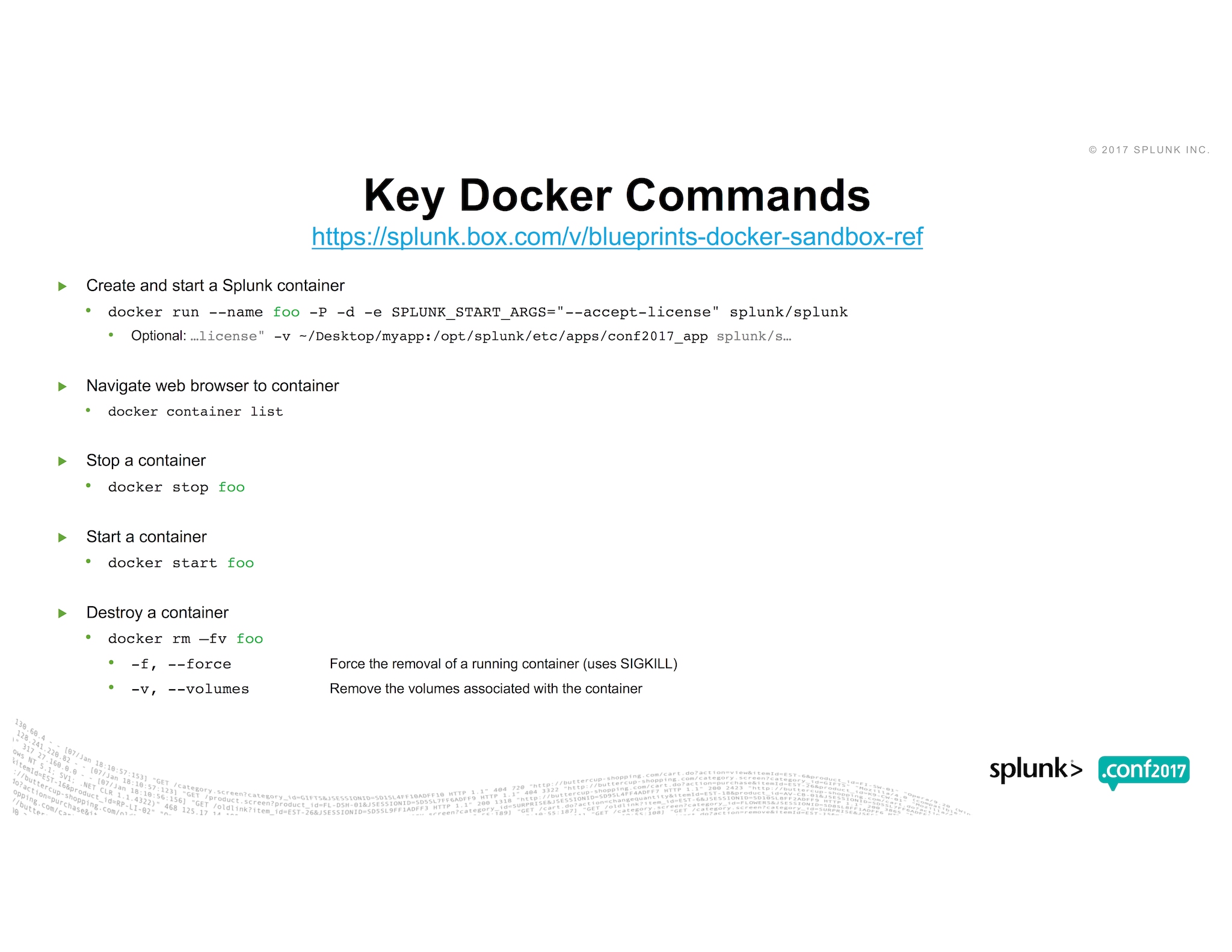 Ok, let's apply everything we learned to appreciate the benefits of using Docker for Splunk sandboxes. Try the following tasks. If you get stuck, the solution column should help you out.

Congratulations! You've gotten your basics on how to use Docker as your Splunk Enterprise sandbox. We're all done here and I hope you enjoyed this. If you want to learn more, here's some resources worth checking out. Enjoy and happy Splunking!

Burch is what happens when you mix a passion for technology with a love for performing comedy. If you find a Burch in the wild, engage lovingly with discussions of Splunk Best Practices and your hardest SPL challenges.