A Deep Dive Into Built-In Anomaly Detection: How the Algorithm Works

The release of Built-in Alert Conditions and Alert Preview allows cloud operations to exploit the full power of our real-time analytics engine in a way that is both intuitive and flexible. Much of the guesswork in applying analytics has been removed: users learn within seconds how an alert would have behaved over a historical time period and can quickly test different alert configurations if necessary.

Each built-in alert condition is a recipe for producing an alert. We have captured analytics pipelines seen across our customers (and our own teams) and exposed exactly those knobs needed to tune the alert to an environment. In this post, we describe the inner workings of one particular alert condition: Historical Anomaly.

Consider the following two week chart, which represents the total number of jobs being processed across our production analytics cluster.

This pattern — larger values midday on weekdays, smaller values overnight and on the weekends — will be familiar to many application developers. For applications that curate content, total views likely exhibits such a pattern; for social networking applications, total messages viewed or sent; for microfinance, loans originated; for search services, advertisements served.

In these scenarios, the difficulty of choosing a static threshold is much more fundamental than requiring domain knowledge or maintenance costs. The problem is that what is anomalous or worrisome is completely different depending on the time of day and day of week, and a static threshold does not have this context.

The main idea of the Historical Anomaly alert condition is to use well-selected historical data to construct a threshold to compare against the current values of a signal. We explain the parameters in the alert condition that determine the selection of data and how to prevent past incidents from influencing the threshold.

The Basics of Parameters

All of the built-in alert conditions require the user to select a Signal to monitor; in this case we have chosen the total number of jobs across a cluster. We must also choose whether to alert when the signal’s values are too high, too low, or either too high or too low (the Alert when parameter). Too few jobs may indicate users are having trouble accessing the application, whereas too many jobs may indicate a need to increase capacity, so in this case either extreme could pose a problem.

There is also a Trigger sensitivity parameter which roughly corresponds to the number of alerts: higher sensitivity will typically result in more alerts. The sensitivity is really a shortcut for several of the parameters which we’ll discuss shortly. 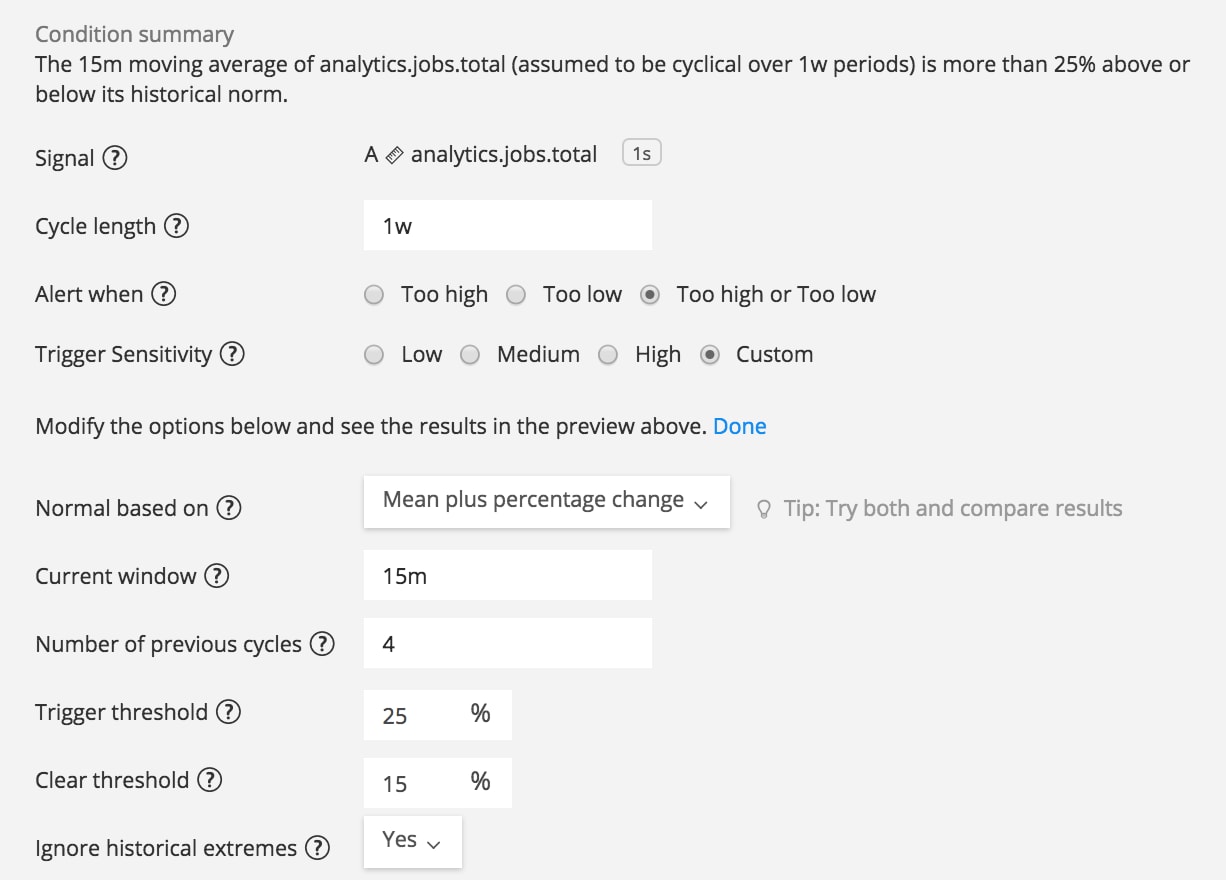 Suppose we wish to compare values recorded on Monday at 10 a.m. with the values recorded at 10 a.m. on preceding Mondays. In the alert condition, this corresponds to a value of 1w (one week) for the parameter Cycle length. The weekly cyclicity shown above is so common that one week is the default value for cycle length.

The parameters discussed so far appear immediately below the condition summary, which explains when the alert will trigger, and changes as parameters are changed.

The Details of Parameters

To avoid defining a threshold based on just four values, we use windows for both current and historical data. So, for example, to compare the 9:45-10:00 a.m. windows from the preceding four Mondays to the same window on the current Monday, we use the value of 15m (15 minutes) for the parameter Current window.

To produce an alert condition, we will construct ranges of “normal” values and alert when the current signal values are outside that range. The option Mean plus percentage change for the parameter Normal based on is one of the methods of defining a range of normal values for the Historical Anomaly alert condition.

While power users will feel comfortable experimenting with all of these parameters, we expect that many high value use cases can be tackled by tuning the percentage change threshold.

The benefit of using the median is demonstrated in the following example from one of our customers. The metric being monitored is the total number of messages sent by users of a social networking platform. Drops in this metric mean lower user activity, which may indicate trouble accessing the application.

In this chart, we can see the drop in the metric (the blue plot on the bottom) and the red triangle indicating an alert was triggered. Coincidentally, around the same time two weeks ago, the metric experienced a substantial, but less drastic, drop (the pink plot).

In the alert detail, we can see the range of normal values (defined by upper and lower thresholds) does not react to the pink plot’s sudden descent. Had this prior incident influenced the threshold, the range of normal values would have been dragged downward, and the alert would have been delayed (or failed to trigger altogether). Note the current plot is the rolling mean of the original signal.

One of the more powerful features of Splunk Infrastructure Monitoring is the ability to set distinct trigger and clear thresholds for alerts. When a signal hovers around the trigger threshold, other monitoring systems typically produce a sequence of alerts that clear and re-trigger in rapid succession. Splunk alerts, on the other hand, are not “flappy” due to the ability to clear an alert on an explicitly set condition rather than simply the negation of the trigger condition.

Built-in Alert Conditions exploit this feature. In this example, if we set Clear threshold to 15%, an alert will not clear until the 15-minute rolling mean is within 15% of the historical norm. Using distinct trigger and clear thresholds gives cloud operations greater confidence that when an alert clears, a new alert will not trigger moments later.

Powerful Alerts for Everyone

Flexible analytics must be a component of any cloud monitoring solution: making sense of the stream of metrics produced by modern computing environments is at its heart an analytics challenge. With Built-in Alert Conditions and Alert Preview, users of Splunk Infrastructure Monitoring can rapidly experiment with different parameters, learn how the alert would have behaved, and easily customize complex analytical solutions in order to deploy alerts into production with great confidence.

Joe is a data scientist at SignalFx. Previously Joe worked at other startups and in academia as a professor and researcher in mathematics.
TAGS
Observability DevOps IT Infrastructure Monitoring
Show All Tags
Show Less Tags