Do We Calculate, Appraise, Classify, Estimate? Yes, But We Do It All with Evaluate (eval)

This is part eleven of the "Hunting with Splunk: The Basics" series. John Stoner has wanted to bring the power of eval to light for awhile. The eval command is one of the most important commands at a Splunker's disposal so I hope everyone learns some hunting goodness!

I hope you're all enjoying this series on Hunting with Splunk as much as we enjoy bringing it to you. Today’s post will touch on another foundational capability within Splunk—the eval command.

If I had to pick a couple of Splunk commands that I would want to be stuck on a desert island with, the eval command is up there right next to stats and sort. Eval allows you to take search results and perform all sorts of, well, evaluations of the data. From conditional functions—like 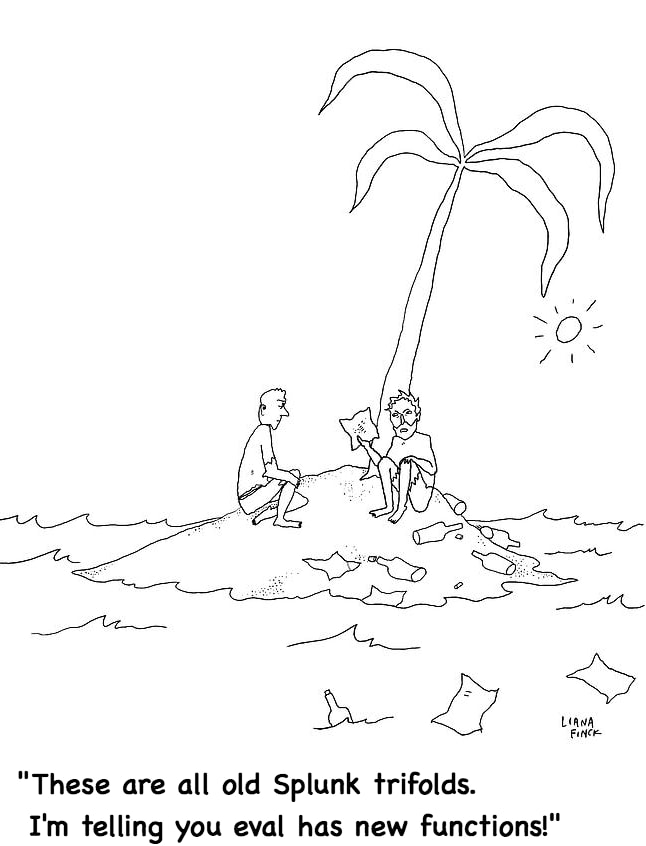 if, case and match—to mathematical functions (round, square root) to date/time functions to cryptographic functions (MD5, SHA1, SHA256, SHA512) and so much more.

To do justice to the power of eval would take many pages, so today I am going to keep it to four examples:

For this initial search, I will leverage Microsoft Sysmon data because of its ability to provide insight into processes executing on our systems. As always, it's important to focus the hunt on data sets that are relevant. My initial search of Sysmon isolated on process, time and host would look something like this:

Basically, I am searching the Sysmon data and using the table command to put it into easy to read columns.

With the initial search in place, I can start using eval. My hypothesis states that long command line strings are of concern due to their ability to harbor badness within them. I want to establish which—if any—hosts have long process strings executing and if they do, I want to know when they executed. To determine the length of a string, I will use eval to define a new field that I will call cl_length and then I will call a function. The output of that function will reside within our new field. My function will be len(CommandLine) where len is short for length of the field in parenthesis, in this case the field CommandLine.

Notice that an additional column has been added on the far right that shows my newly created calculated field length.

If I want to continue to evolve this search, I can apply statistical methods to the data. As discussed in our earlier blog on the stats command, I can calculate average, standard deviation, maximum, minimum and more on a numeric value while grouping by other field values like host. The sort and where commands can also be used to filter out data below your defined threshold and bring the longest (or shortest) strings to the top.

Another way eval can be used for hunting is by calculating the time elapsed between different events and applying functions to date/time values. Continuing with my earlier hypothesis and applying the sort command, I can see that I have a long command line string on a specific host and I want to calculate how many days have passed since that command line string of interest executed on the system.

Using eval, I can do this easily. I will create a new field called daydiff. I want to compare the _time of the event with today’s date to calculate the number of days since this long string ran. My search with the new eval command would look like something like this:

To determine the number of days that we have had this exposure, I need to convert seconds to days. This is easily done by dividing the number of seconds by 3,600 to get hours and then by another 24 to get our result in days. Could I just divide by 86,400? Of course, but I like to do things more complicated.

Now that I have the number of days, I don’t want to provide a decimal answer; leadership probably doesn’t care that my answer is 27.3 days of exposure. In this circumstance, an integer answer is probably sufficient, so I can use the round condition within the same eval command to round our answer off to the nearest integer. To do this, I set the decimal argument within the round command to 0. With the round command added, this calculated value goes into the field I created called daydiff. This new field can then be used in additional searches built onto this search as well as alerts and reporting.

Eval can also be used for text manipulation. I may want to correlate events with a list of domains, however the lookup that we have been provided has all of the domains in uppercase. To ensure that matches are identified, the upper and lower functions can be used in conjunction with the eval command to provide a way to get data prepared and then use the lookup command or some other transformational command to perform the desired correlation.

The example below shows the use of the upper function to convert our query in DNS to all uppercase. That's pretty self-explanatory.

To eliminate the values that are in the dns_noise.csv file, I then add the lookup command and an addition search command to filter down to the queries that are not on the list and we can see a bit of a different result.

You may be looking at this last example and asking why I brought this up. I mention the eval text conversion working with lookups because if I'm hunting, the last thing I want to get caught up in is a lot of noise that is not important to my hunt. Being able to use a whitelist and get rid of the noise is very important.

This short example can be extended using some of the tips that David Veuve mentioned in his recent post, "UT_parsing Domains Like House Slytherin." By using the URL Toolbox to extract domains from DNS queries and URLs, you can then apply the lookup command to compare the extracted domain to the list of domains that you have—just remember that case sensitivity matters!

As you can see from this post, there are many uses for the eval command. To be clear, I only scratched the surface of it’sits power. If you have the Splunk Quick Reference Guide, you'll notice one entire page of the tri-fold covers eval and its associated commands.