While phishing is one of the world's most effective attack vectors, it still relies on effective payloads to survive the first stage of the attack, where the victim either visits a malicious website or opens a deceptive attachment, bypassing security controls. Phishing is a technique practiced by criminals, but also for penetration testing and red team exercises, which use this type of social engineering to help assess a target organization’s security posture.

There are plenty of off-the-shelf tools available to help even a less-skilled attacker craft and obfuscate payloads for phishing attacks, lowering the barrier to entry. One of the most popular post-exploitation frameworks for payloads is Empire. Empire is a very effective tool for crafting and obfuscating post-exploitation payloads based on Powershell 2.0 or Python. These payloads act like agents that communicate back and forth and can execute multiple post-exploitation functions, including payload injections, exfiltration, lateral movement, persistence, and more.

The screenshot below shows the Empire framework: Once the victim has executed the payload, Empire provides the attacker with a number of functions to help them maneuver through a victim's system, escalate privileges, and navigate through the compromised network. 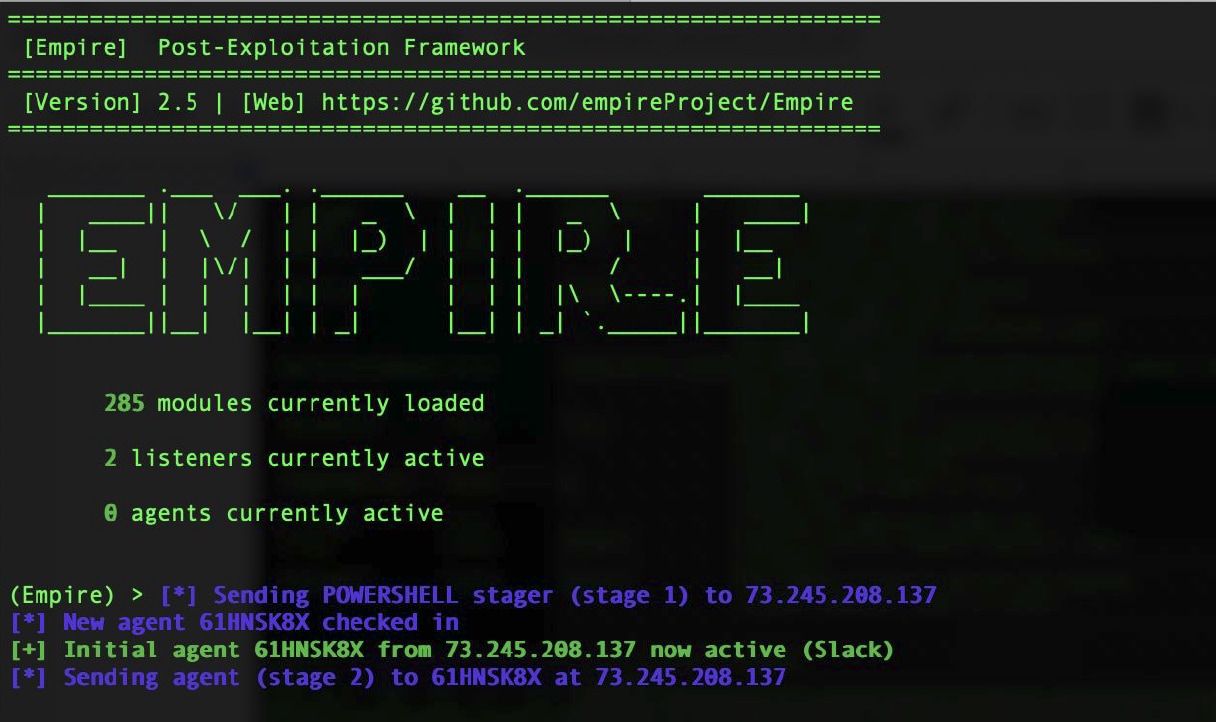 Many of these phishing payload frameworks also allow the attacker to incorporate customized payloads, which usually enable more effective obfuscation, as well as recent or unpublished exploitation code. One such payload in the wild is CVE-2017-8464 (Code execution via .lnk file), which has been seen in recent malicious campaigns. This type of payload is usually delivered via email. The actual payload will likely be compressed into a password-protected .zip file to bypass security product scanning, as demonstrated in the following image.

Once the file is opened, it is placed in a temporary folder. We can obtain this information from log sources of many EDR/ETDR tools. In this case, such information was obtained using Sysmon logs (where this operation will register an EventCode 15).

The screenshot below shows the first phase of the .zip file's extraction:

The search shows the process outlook.exe (email client) or explorer.exe (Windows File Explorer) extracting a .zip with a .lnk file. From there, depending on the payload, the .lnk file execution will either download an additional payload or execute a file (usually embedded in the same .zip file).

For detection, the Security Research Team's goal was to pinpoint the exact path of the malicious file. We accomplished this by ingesting and searching Sysmon log files. We can identify the application that initially opened the file (Microsoft Outlook). Also, notice Sysmon EventCode 11, which shows the name of the malicious file, plus :Zone.Identifier, which is file metadata used for location and execution of next payload.

Splunk Phantom can also be used to perform a wide range of investigation and response actions involving email attachments. The recently released Phantom Community Playbook called “Suspicious Email Attachment Investigate and Delete” is an example of how Splunk ES and Splunk Phantom can be used together to repeatedly detect, investigate, and delete suspicious emails with attachments in a highly automated fashion. This playbook can be triggered by either of the detection searches in the "Suspicious Emails" Analytic Story. Once initiated, the playbook detonates the file attachment in a sandbox, extracts network indicators from the detonation, checks them against threat-intelligence databases and internal Splunk data models, and notifies the appropriate analyst with all of the results. From there, the analyst can approve an action to delete the email from the user’s inbox--hopefully before they have opened it or executed the attachment.

The following screen capture shows an example of an email payload triage performed via Splunk Phantom. This playbook combines several log sources and defense technologies to triage the file and orchestrate a response. Some of the components used below include file extraction, sandbox detonation, IP reputation check, DNS checks, and URL checks, and more.

The Splunk Security Research Team hopes that our Analytic Stories on phishing help you develop a formidable defense against this attack vector. We welcome your feedback, as well. Feel free to leave comments below and/or click on the Feedback Center tab in ESCU and let us know how to improve! (Of course, we love compliments, too.)