Does one or more of the following personas describe you?

If you fit one of those personas, you are in luck because I’m happy to tell you about some new Splunk integrations with Visual Studio Code in this blog.

What is Visual Studio Code?

Visual Studio Code is a free, cross-platform, highly rated code editor from Microsoft that provides a rich development environment including debugging capabilities such as breakpoints, stepping into code, variable inspection, and displaying the call stack. Visual Studio Code is very extensible, and this integration takes advantage of the extensibility to provide intelligence about Splunk .conf files and interact with Splunk via the editor.

After spending some time creating your shiny new Splunk extension, you’re ready to test it out. If you’re imperfect like me, you might get an error or unexpected results or no results at all.

There has to be a better way – and now there is!  This integration allows you to set breakpoints, step into/over code, inspect the call stack, and more.

Logically, there are two components:

Technically these things can run on the same logical machine; however, Visual Studio Code can run on a workstation while Splunk Enterprise runs in a remote data center or even a public cloud.

The detailed steps for debugging are documented in the supporting add-on and this Wiki, so I will cover the gist here for brevity.

Let’s say you have installed an add-on that includes an input, and you want to troubleshoot it. Traditionally, this would involve examining the _internal index.  This puts you at the mercy of the developer hoping they put enough logging statements in their code to determine what might be going on.  Now, with this integration, simply install the Splunk supporting add-on, add a breakpoint in the code, and step along in Visual Studio Code to observe the magic that is going on. 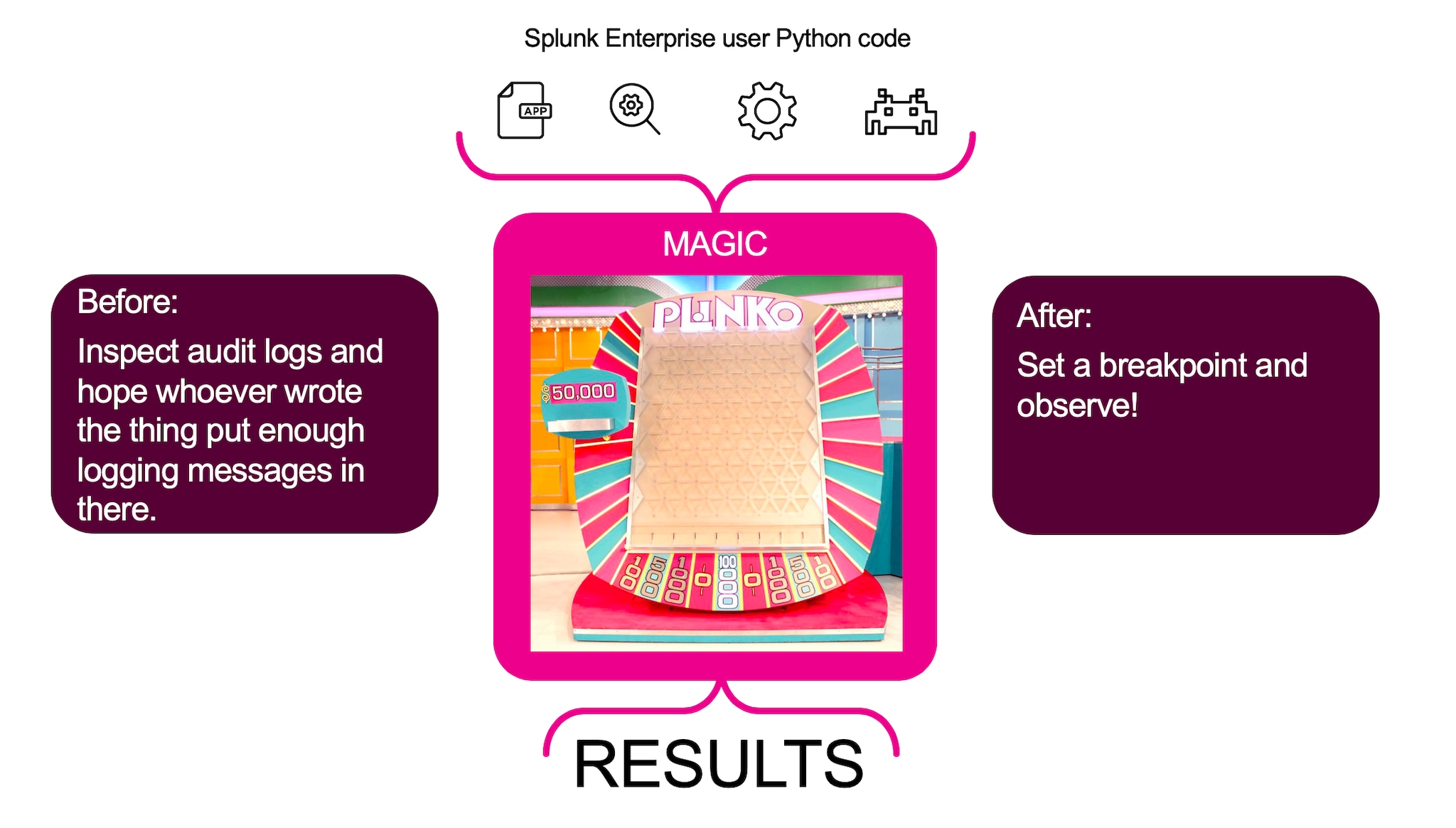 If hand editing .conf files are part of your Splunk admin work, I have good news for you.  The Visual Studio Code Splunk extension contains intelligence about Splunk .conf files that do the following:

The extension reads Splunk .spec files to facilitate IntelliSense and linting.  You can provide a path to your own .spec files if desired.  For more information, check out the Wiki.

The “I Live in a Code Editor” Persona

These Splunk Enterprise + Visual Studio Code integrations help decrease development time, troubleshoot issues, reduce human error, and more.  This is just the beginning of more integrations to come.  If you have questions, find us on Splunk Answers.