In our previous blog post, we introduced the concept of event-driven architecture (EDA) and provided a high-level reference architecture for an EDA built using the core technologies within the Streamlio platform.

In this blog post, we will take a deep dive into simple event processors and the capabilities provided by the Streamlio platform to support them.

We have already established that the defining feature of an event-driven architecture is the central importance of events. Within an EDA, event consumers react to the arrival of events following a programming style referred to as event-based-programming (EBP). In contrast to batch-oriented or procedural programming, in EBP the software system executes processing in response to receiving one or more event notifications, and communicates with other software components entirely via events in an asynchronous manner.

While not all event-based applications are the same, they typically follow the structure shown in the figure below, with event producers that introduce events into an event processing framework in the middle that is responsible for persisting and delivering the events to the event consumers.

Within an EDA, event processors generally fall into one of the following categories:

There are a variety of reasons why you would want to chain event-based applications together. For instance, consider a scenario in which you are monitoring an IoT sensor reading for patterns or abnormalities, while at the same time you wish to retain these events in long-term storage (e.g. HDFS or Amazon S3) for your data science team to use for model training.

The first sequence of event processors would handle the ETL-type processing of the events to transform them into a consumable format. Those records would be sent to event consumer 1, which in this case would be HDFS. At the same time, we also want to forward these cleansed events to our secondary sequence of processors that implements the anomaly detection workflow. In the next section we will explore using Apache Pulsar Functions as a framework for implementing event-based processing using simple programming logic functions. 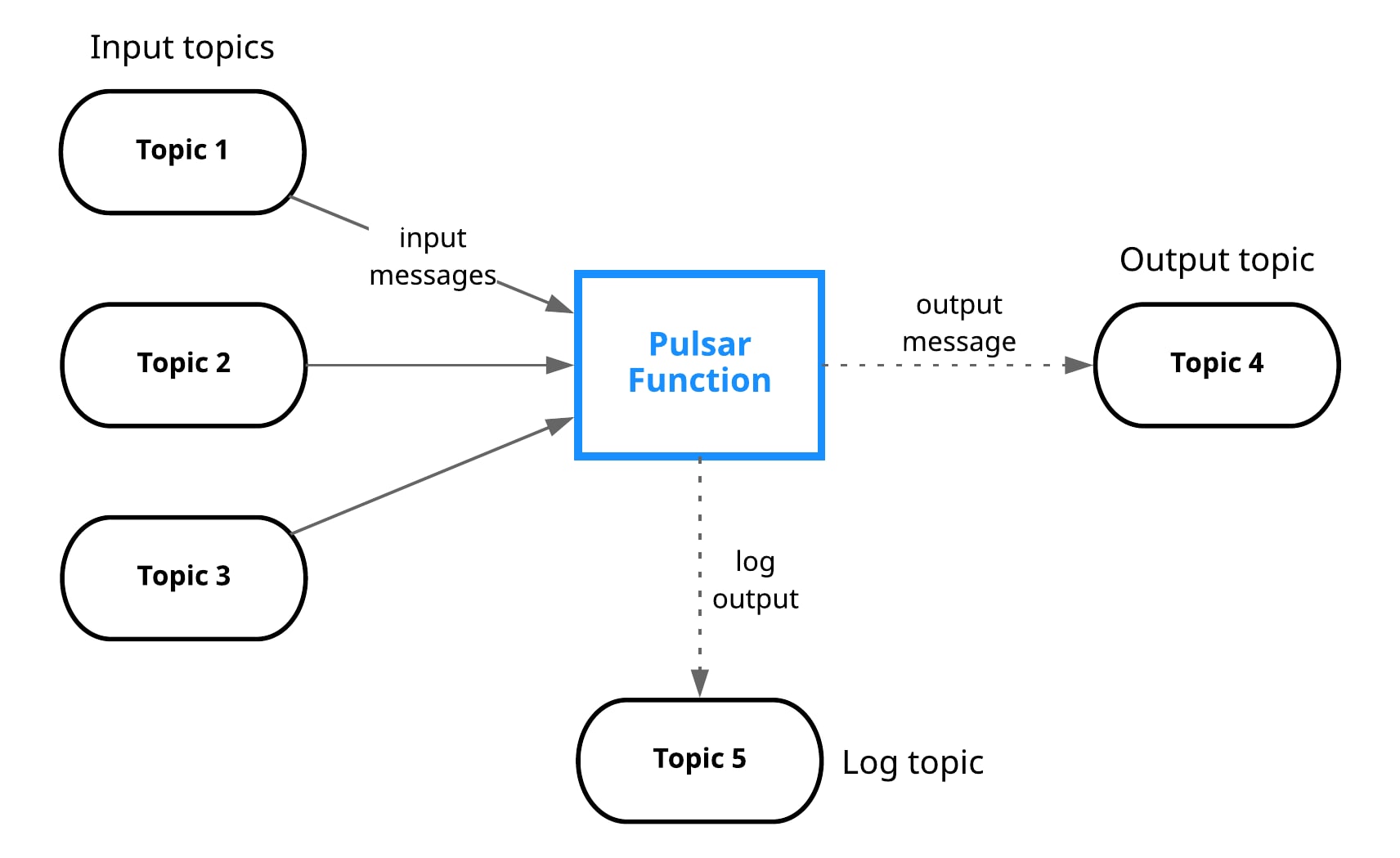 As you can see, the language-native approach provides a clean, API-free way of writing Pulsar Functions, and is ideal for the development of stateless event processors. However, the trade-off for this simplicity is the lack of access to any previous state information.

The command above will lunch 4 instances of the org.example.functions.MyFunction class on the Pulsar Broker, each with 2 CPU cores, 8GB of RAM, and 10GB of disk space. (Note that the RAM and disk settings are specified in bytes and the CPU and Disk settings are only enforced in Docker environments.)

Lastly, there is also a way to provide user configuration properties when creating a Pulsar Function, which is useful when you need to reuse a function. We pass in a collection of key-value pairs in the command below by specifying a JSON string for the —userConfig property. These values will be accessible at runtime via the Context object for Pulsar Functions that utilize the Pulsar Functions SDK, which we will examine in the next section.

The additional Context object defined in both the Java and Python SDKs provides a wide variety of information and functionality to the function, including the ability to persist intermediate results that can be used to provide stateful event processing. The following is a sample of the information contained within the context object:

In this section we will cover on a few usage patterns that leverage these features of the Context object.

When you run or update Pulsar Functions created using the SDK, you can pass arbitrary key/values to them via the command line with the –userConfig flag. Key/values must be specified as JSON. Here’s an example of a function creation command that passes a user config key/value to a function:

This feature allows us to write generic functions that can be used multiple times, but with a slightly different configuration. For instance, let’s say you want to write a function that filters JSON events based on a JSON path expression. When an event arrives, the contents are compared to the configured expression, and those entries that don’t match are filtered out.

Obviously the behavior of this function depends entirely upon the JSON path expression it is filtering on. In order to make it more reusable, with the Pulsar SDK we can defer specifying this value until it is deployed.

As we can see in the above example, the value of the JSON path filter to use isn’t known at compile time, and is instead pulled from the context using the getUserConfigValueOrDefault method.

Stateful event processors require a memory of prior events in order to generate their output. The ability to store state is a key building block for processing multiple events. Within the Apache Pulsar Function framework this state information is stored in a dedicated key-value store built on top of Apache BookKeeper. The Pulsar SDK provides access to the state information via the Context object. 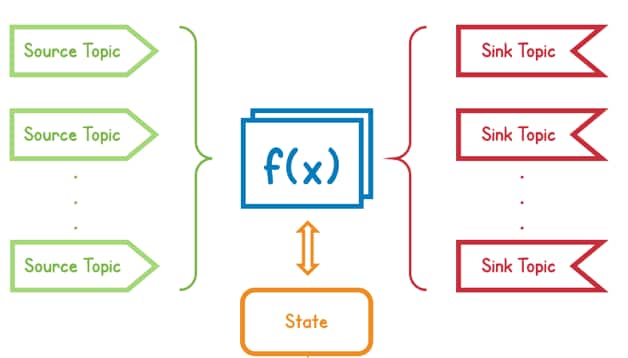 Let’s look at a simple example to illustrate the idea of a stateful agent. Suppose we have an application that receives temperature reading events from an IoT sensor, and we are interested in knowing the average temperature of the sensor. We can use an event processing agent to continuously recompute this value using the following function.

Pulsar Functions can publish results to one or more output topics, but this isn’t required. It is also possible to have functions that simply produce a log, write results to an external database, or just monitor the stream for anomalies. The following is a function that simply logs each event it receives.

As we saw in Figure 4, Pulsar Functions can consume events from multiple topics, so let’s take a look at how one goes about writing a function that can do this:

As you can see from the code example, we first get the name of the input topic from the Context object itself, and then based upon that information parse/handle the event accordingly.

The Apache Pulsar SDK provides a metrics collection mechanism that you can use to record any user-defined metrics you choose. In the following example, we keep separate metrics to track the total number of times the function was called, and another to track the number of times it was called with invalid input. For instructions on reading and using metrics, see the Monitoring guide.

In this blog post, we took a deep dive into the simple event processing capabilities provided by the Streamlio platform based on Apache Pulsar Functions.

We introduced the concept of event based programming, and examined how many individual functions can be interconnected to form event processing networks. Lastly, we covered the Apache Pulsar Functions SDK and some of the best practices for utilizing the state management features provided by the Functions SDK.