Seeing the Future of Cybersecurity in Action

Submitted on behalf of Enoch Long

On March 14th I presented an overview of Splunk to contestant finalists at the CyberPatriot V National Finals Competition at the Gaylord National Resort and Convention Center in National Harbor, Maryland to approximately 125 – 130 students. Created by the Air Force Association (AFA), the Cyber Patriot competition was created as a response to the critical need for cyber professionals in the workforce by enhancing high school students’ knowledge of careers in cyber security, technology, engineering, and math disciplines. Splunk was a Diamond level sponsor of the event. This meant that for the first time in the history of the competition a proprietary piece of software allowed as part of the competition and was loaded onto the laptops provided to the finalists. Participants in this year’s competition were from national Science, Technology, Engineering, and Mathematics (STEM) programs as well as Junior Reserve Officer Training (JROTC) programs.

Splunk technology/software was featured in the network security part of the competition and was used to identify attacks in logs, analyze threat signatures from intrusion detection systems, and to analyze vulnerabilities on syst 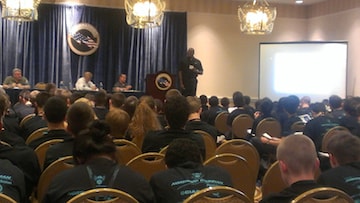 ems.  Students in the competition performed network security analysis, and forensics by utilizing Splunk’s search, alert, and visualization capabilities. Coaches were very supportive of their teams and expressed a sense of pride in their student’s capabilities and accomplishments. The coaches also expressed that Splunk’s software was ideal for the parts of the competition dealing with identifying and reporting suspicious behavior, and submitting trouble tickets.

During pre-competition briefing, I presented a slide deck that focused on the capabilities Splunk offers. The coaches in the competition were ecstatic to utilize Splunk in the competition and the participants asked questions about how to deploy universal forwarders and the configuration files needed to transfer data from the forwarder to the indexer. Bringing Splunk to this competition was rewarding for me and allowed students to become familiar with a cutting edge product that many of them had not have previously heard of.  I am confident that Splunk’s human resources department will see employment applications from some of these “brilliant minds in the making” in the future! It was especially fun to see some of the teams throw off their CyberPatriot shirts in favor of Splunk t-shirts. Personally, I had no idea as a high school student I would ever have been in the cyber security profession and it was fun to see some of the cream-of-the-crop get an early start on a career.

It was an honor to present to the students at CyberPatriot V and to represent the Splunk. I look forward to expanding the company’s reach in next year’s competition and getting more students excited about careers in cyber security, technology, and engineering!