Find the Ultimate Truth in the Wire. Even the most granular logs are not enough to be the truth

SIEMs are being deployed in more organizations today from larger to smaller enterprises. It is playing a critical role in consolidating most of the security events, so it can detect symptoms of various infrastructure security problems.

SIEMs are good in detecting problems by scanning the surface of data for key indications like how burglary alarm works for your homes. It is a basic security measure you would put into your infrastructure to detect the first line of intrusion. In order for SIEMs to do this, there are common ways of processing data to map different technologies into predefined data structures so it could apply contextual rules or conditions to detect different patterns of behaviors. This requires normalizing the data to support common correlations rules. 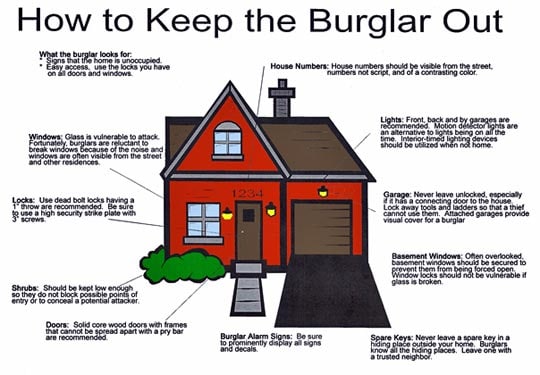 But the problem is having these fundamental measures sometimes doesn’t necessarily reduce the chance of being broken into because often times we are dealing with adversaries who knows these data limitations in SIEMs. Especially root-cause attacks from these adversaries with a definite answer on what happened can be difficult because many of organization don’t have the technology that could validate the intrusion and/or don’t have the skills to do it. It’s like if your house is burglarized and you get an alert for a window that was broken open, but you don’t know what is missing until you go through all the things you have in the house to figure out what’s missing. So now you install sensors in the rooms to detect movement to get a better idea of what to look for in SIEMs. It would be equivalent to implementing higher fidelity rules. Even if you have SIEMs that are tuned to get high fidelity alerts, many times your security operations still may not know what has happened in the infrastructure.

Even the detailed sources of logs are preserved, it isn’t enough to be the source of truth
Logs definitely provide more context since it preserves the original details and give more granular traces of activities but still, it's just another layer of service/application information.  It’s like having better hints but still not the answer.

Validation is often left out
While the logs tell good stories they are not the absolute answer.  Further, validation is impossible most times because the majority of security operations have no data to go deeper.

In cybersecurity, there is not debate on defining “network/packet forensics” as the source of truth, it would be a synonym for DVRs in the home or physical security.

But, how could having the source of truth at your fingertips change how you defend against the adversaries?  What could it mean to have the most powerful SIEM on the market closely integrated with full network/packet forensics capability?

Introducing Splunk Enterprise Security (ES) with full network/packet forensics capability at your fingertips.  What are you getting with these combinations? 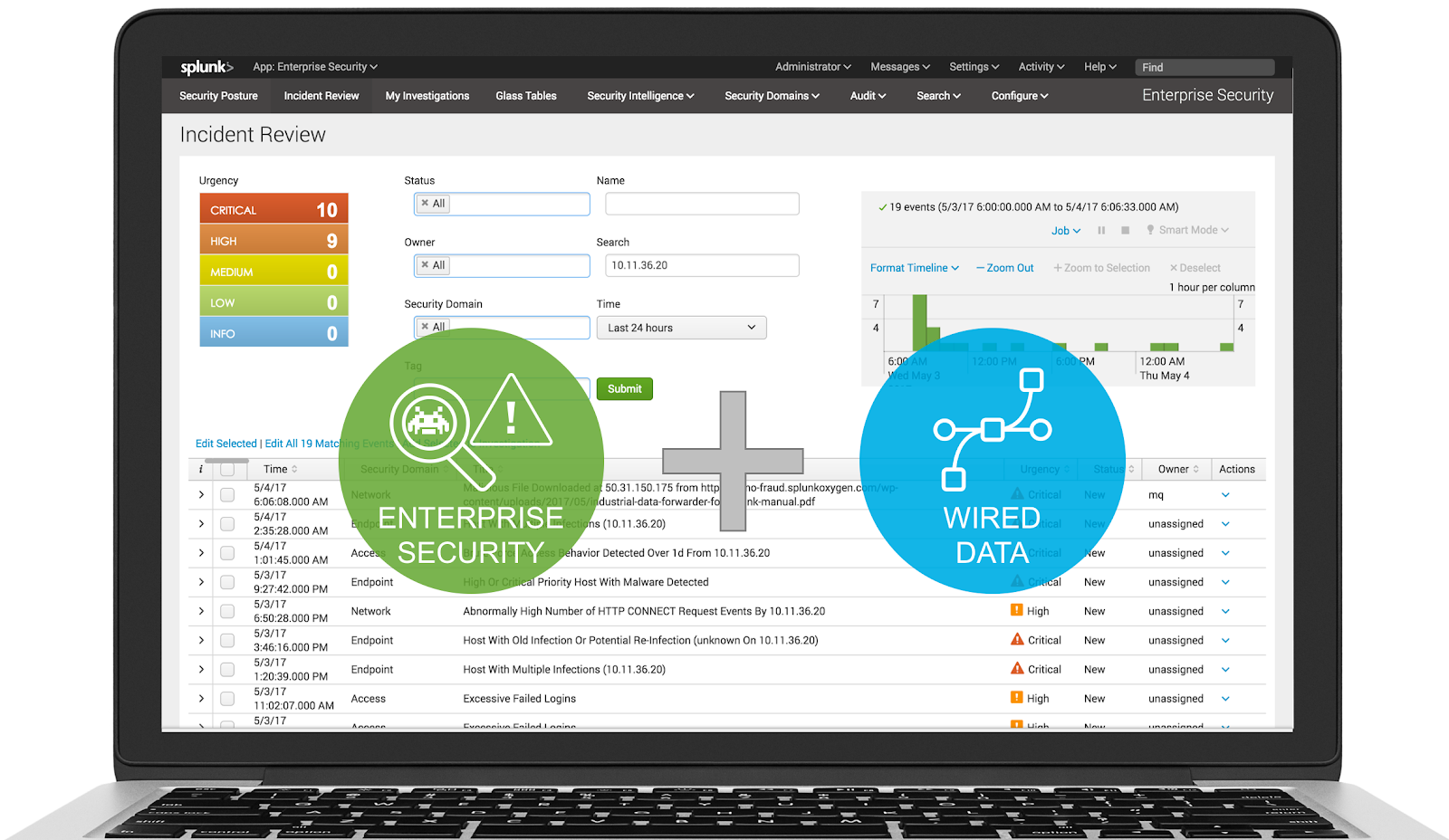 Full packet/wired data provides additional dataset, and is in CIM compliant, if you don’t have all the luxuries to invest in a variety of sensor technologies; like proxy, firewalls or IDS, IPS that would feed ES.  A great benefit that will pump events into ES, so ES can detect higher fidelity alerts.

You can now alert on PCAP decoded information, allowing rules to be created from network to application layer conditions.  A great example would be monitoring SQL transactions to a critical database server from the wire.  How about application layer messages in corporate applications?  Also, there is a great use of wired data in looking at DNS activities.  This opens the door for many additional use cases that will make your infrastructure more secure. 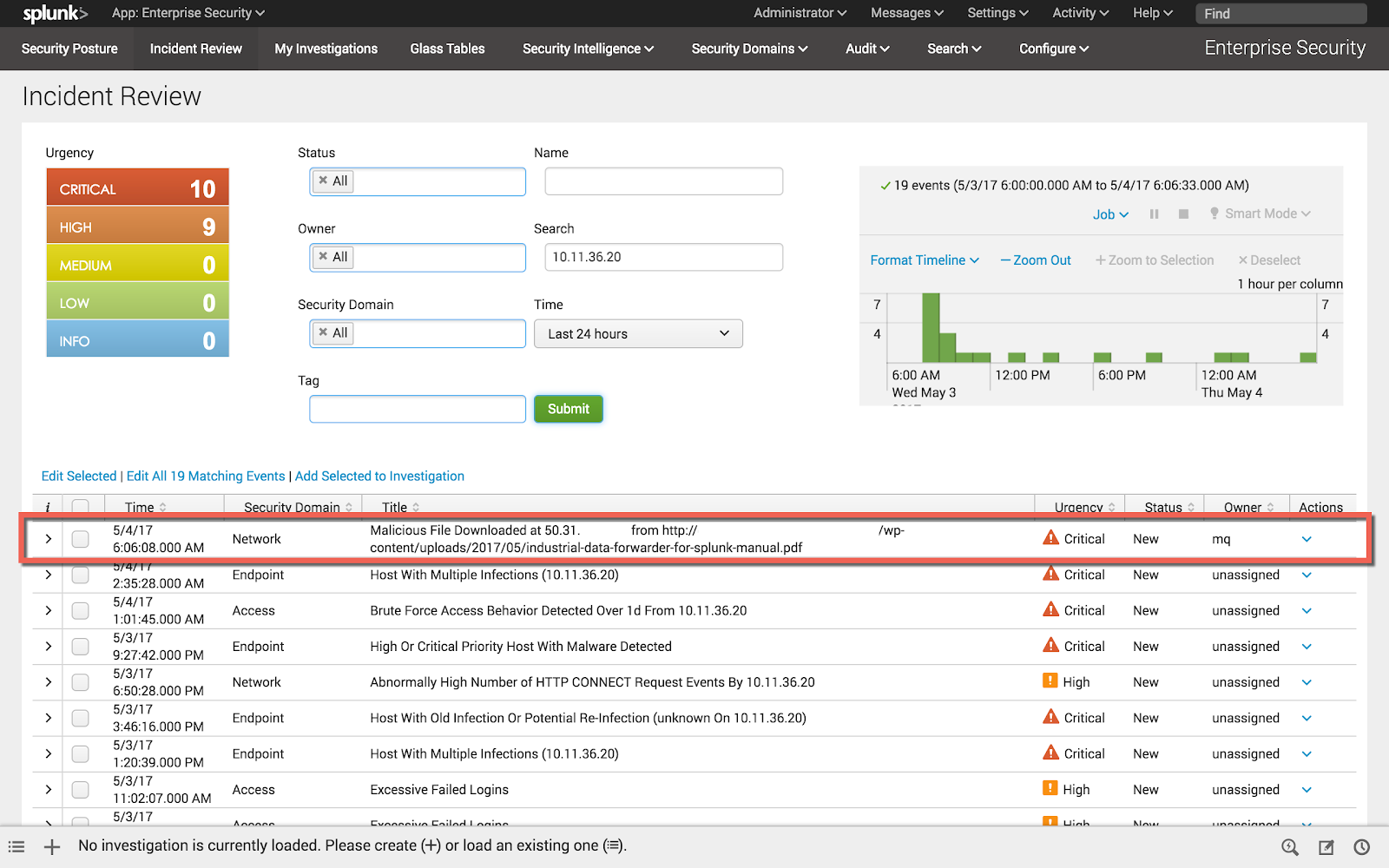 With ES and Stream integration, notables are associated with captured PCAP artifacts, so it can be easily accessed, in the context of the particular alert or incident.  This allows the power of deep dives at your fingertip, so you don't waste time looking for massive amounts PCAP data specifically related to the event. 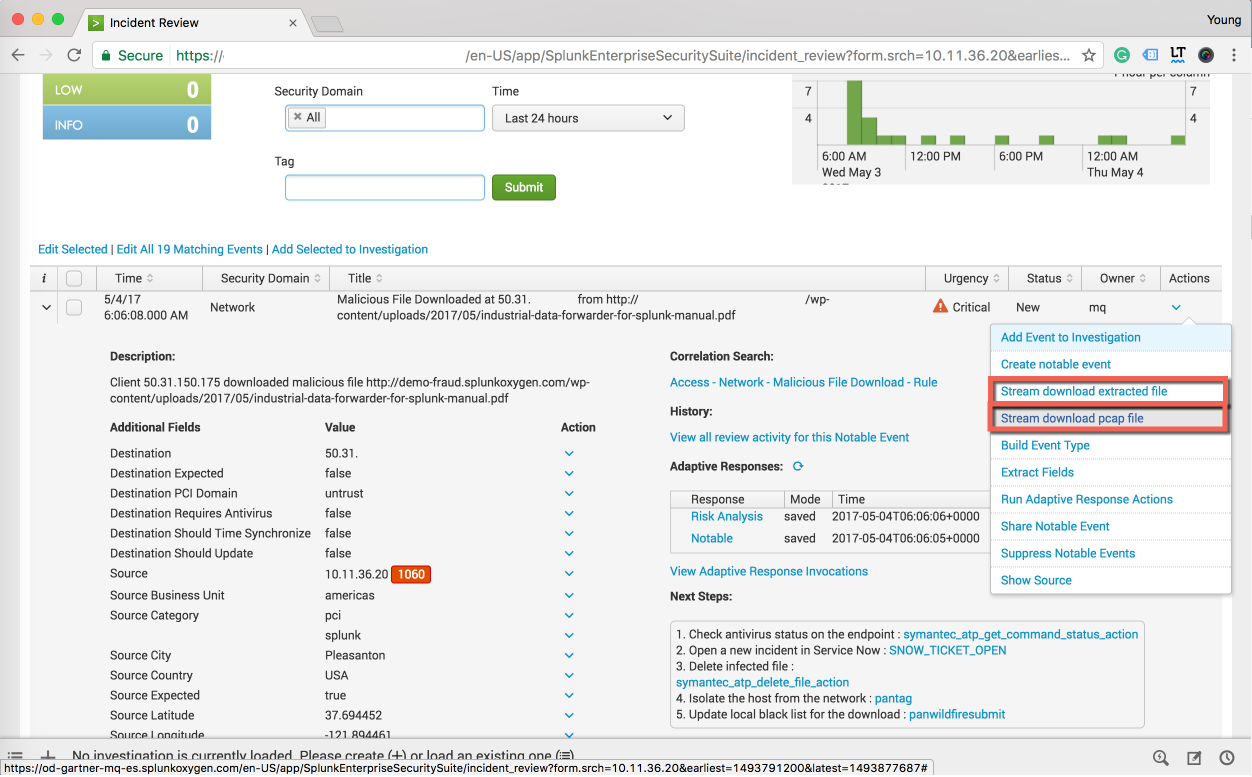 A single click downloads the PCAP to your desktop and opens in Wireshark.  If there are any attachments or downloads like PDF, DOC, EXE; these are separately extracted (reassembled), so if you think there are important classified documents sent via SMTP, you will be able to open them to see what that file was in order to validate the content. 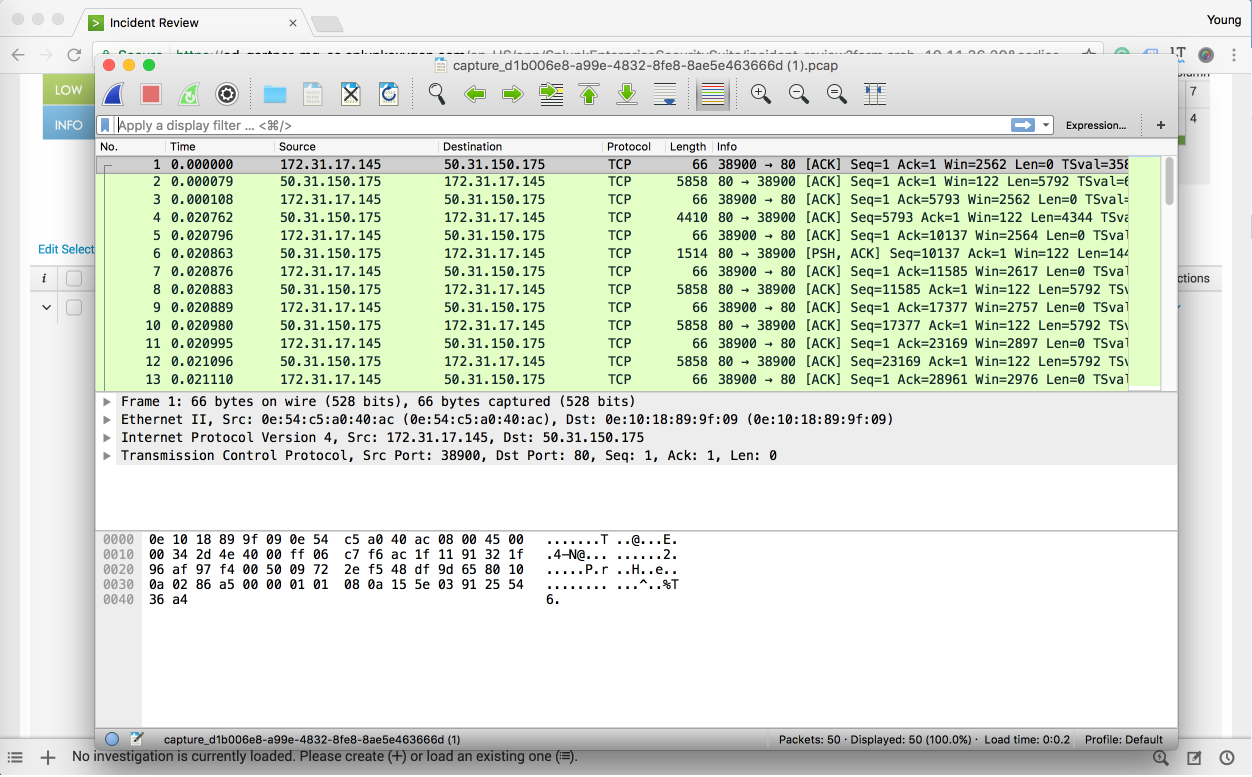 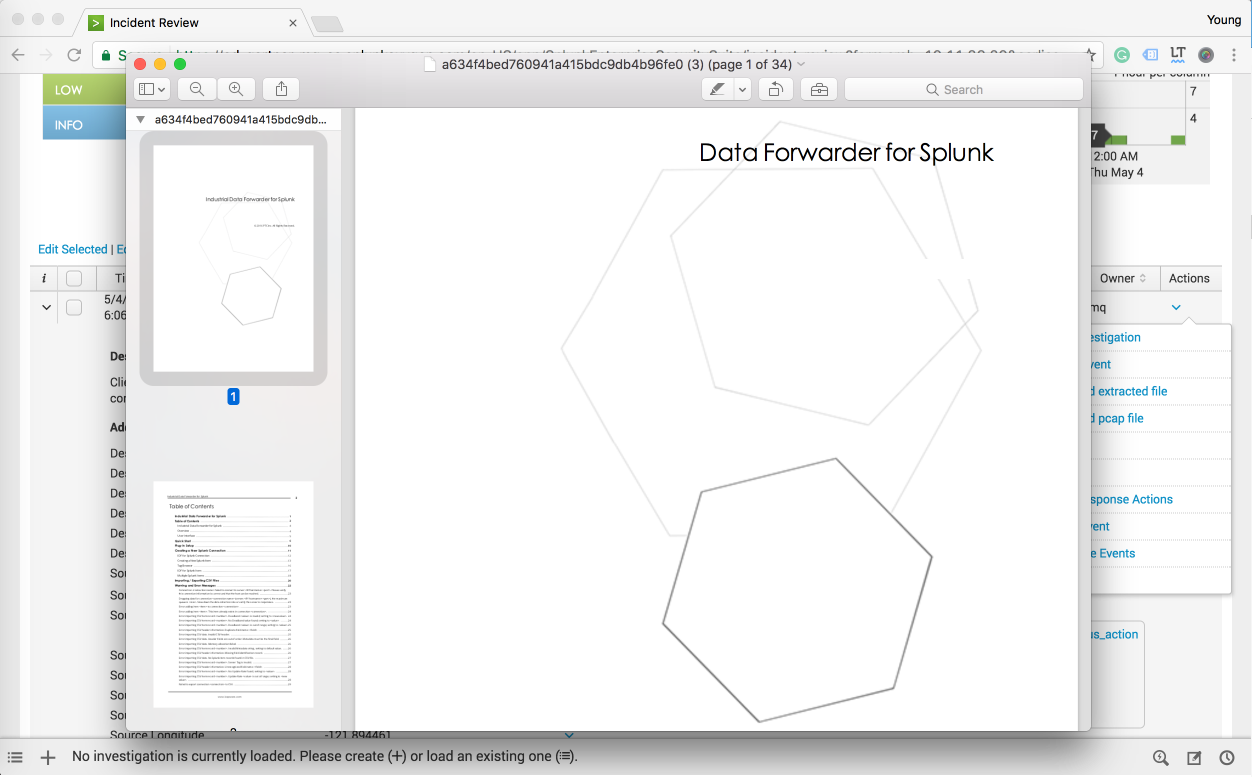 If you have Splunk ES, don't miss out on what ES and Stream 7.1 integration can do for you!