You Can’t 'Hyde' from Dr. Levenshtein When You Use URL Toolbox

This is part ten of the "Hunting with Splunk: The Basics" series. Another great posting by my personal SPL expert in life, David Veuve, on a subject I love. I hope you all enjoy. - Ryan Kovar 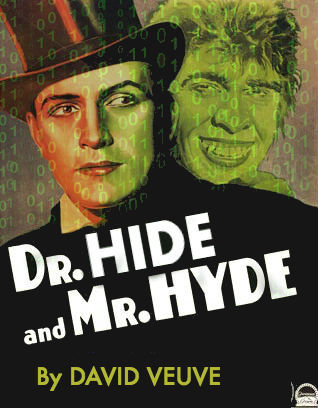 In our last post on parsing, we detailed how you can pass URL Toolbox a fully qualified domain name or URL and receive a nicely parsed set of fields that includes the query string, top level domain, subdomains, and more! Today, we are going to doing some nerdy analytic arithmetic on those fields. If you haven’t read that previous post "UT_parsing Domains Like House Slytherin," go check it out and then come back here...we’ll wait.

So what do we mean by “nerdy analytic arithmetic”? Specifically taking those previously mentioned fields like domain and ut_domain, and trying to find the randomness of values or how close they are related to legitimate domains (or other strings) using Shannon and Levenshtein calculations.

As always, we like to begin with hypotheses when we hunt. Let’s start by using email events and hypothesize that adversaries try to fool users by sending phishing emails from addresses with domain names that closely resemble legitimate domains, usually known as “typo squatting.” To detect these malicious domain permutations, we will use the Levenshtein distance between strings.

Levenshtein distance was first considered by Vladimir Levenshtein in 1965. The distance is basically the number of changes made to transform one string to another. If one string is “hello!” and the other “hallo!,” the distance would be 1, as the “e” would be replaced with an “a.”

With that background, let’s look at an example with URL Toolbox. 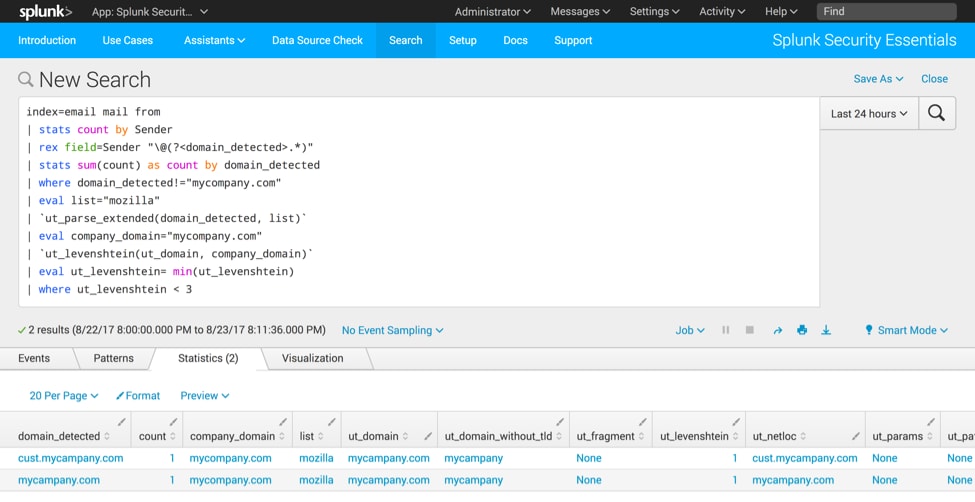 In this example, we own the domain “mycompany.com” and someone tried to trick us by sending an email from a domain called “mycampany.com”! The first five lines of the search extract the domain and run the `ut_parse_extended(2)` macro against the domain (we covered that in our last post, as I'm sure you remember). The new part of this search runs the macro `ut_levenshtein(1)` against the newly extracted ut_domain field and compares it to our legitimate domain. As seen in the screenshot above, that distance is one, easily detected by our rule. Most customers I’ve surveyed use a threshold of 1-2 for alerting; anything more than 2 and you risk getting lots of false positives.

The same technique can be used against any data source. Let’s alter our hypothesis to assume that users receiving phishing emails will not notice typo squatting in a link they click. Here’s an example looking for just that scenario with the domain “mycompany.com.” 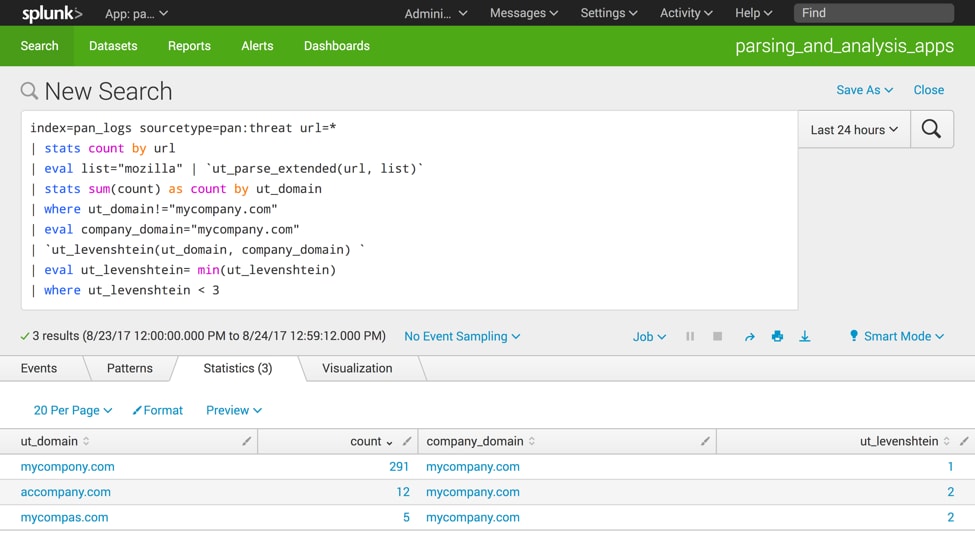 I’ve grayed out the commands that are the same as our first example – to look at a totally different data set, the only change we needed was to change the sourcetype and parse the url.

URL Toolbox also supports multi-value fields, allowing us to detect the use of subdomains that try to trick us, as well as allowing us to monitor multiple domain names (since everyone has multiple domain names in their organizations). This search is a bit longer, but it’s worth it! This is very similar to the search in Splunk Security Essentials under the header of “Emails with Lookalike Domains,” so you can go see it there if you like.

Let’s continue with our original hypothesis around phishing emails, but broaden it to include multiple domains as well as subdomains. 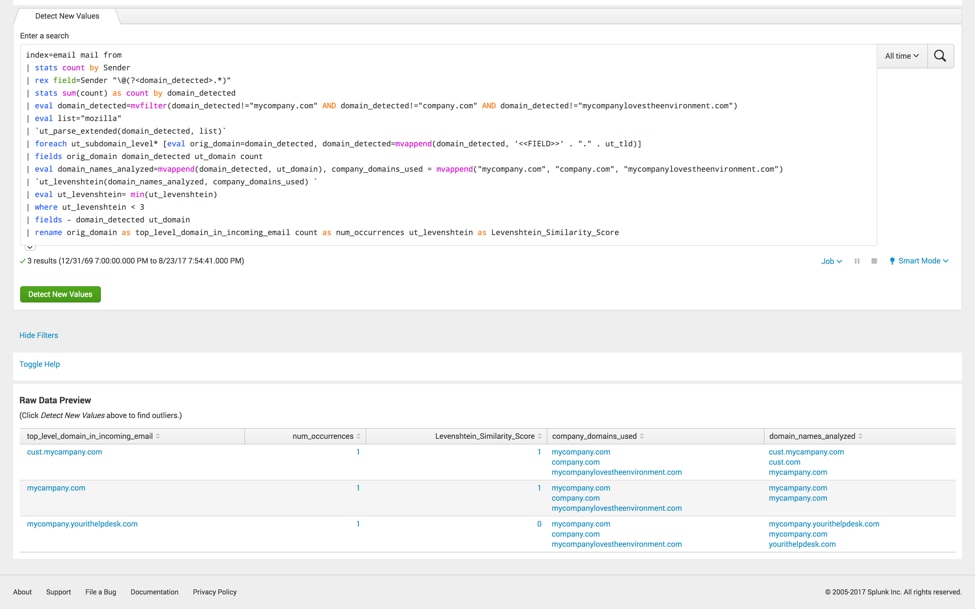 The process of the search is like the single domain search, but adds logic for handling multi-value fields.

Okay, let’s move from Levenshtein and look at Shannon Entropy detection. Shannon Entropy is named after Dr. Claude Shannon, who conceived of entropy within information in 1948. The basic gist of information entropy is that it allows us to determine the amount of randomness present in a string. For example, google.com has an entropy score of 2.65, but c32DyQG9dyYtuB471Db.com has an entropy score of 4.2! Using this technique provides us the ability to hunt for algorithmically-generated domain names.

In this example, I am starting with a hypothesis that malware in our network uses randomized domain names to communicate with other malicious infrastructure.

In our search, we focus on identifying URLs, performing a statistical calculation to get a count by URL, and then using the URL Toolbox macro `ut_parse_extended(2)` to parse out the domain. After the domain is parsed, we use the `ut_shannon(1)` macro to calculate the entropy score for each domain. After we calculate the entropy, we then perform some additional statistical calculations and format for viewing.

In the example above we look for any domains with entropy greater than 3. This cut off will be different in every dataset, adjust it as needed until you have low false positives.

Extending the search we just created, we could hypothesize that adversaries will attempt to exfiltrate data via dns. To assist us, we will refine our search by adding in a few more statistics. This query was showcased during SplunkLive! 2016 and allows us to detect data exfiltration via the tool dnscat2 (or dnscat). dnscat2 asks for a domain name that the attacker owns, and then encrypts, compresses, and chunks files. To exfiltrate, it generates a lot of DNS requests for random subdomains (the exfiltrated data) within that domain. Since the attacker owns the domain name and is listening for the requests, they can successfully capture and recreate the data on their server. No firewall holes are needed and NGFW detection is impossible because it appears to be DNS traffic from your DNS server!

Let’s see how we might hunt for this kind of data using the stats command. 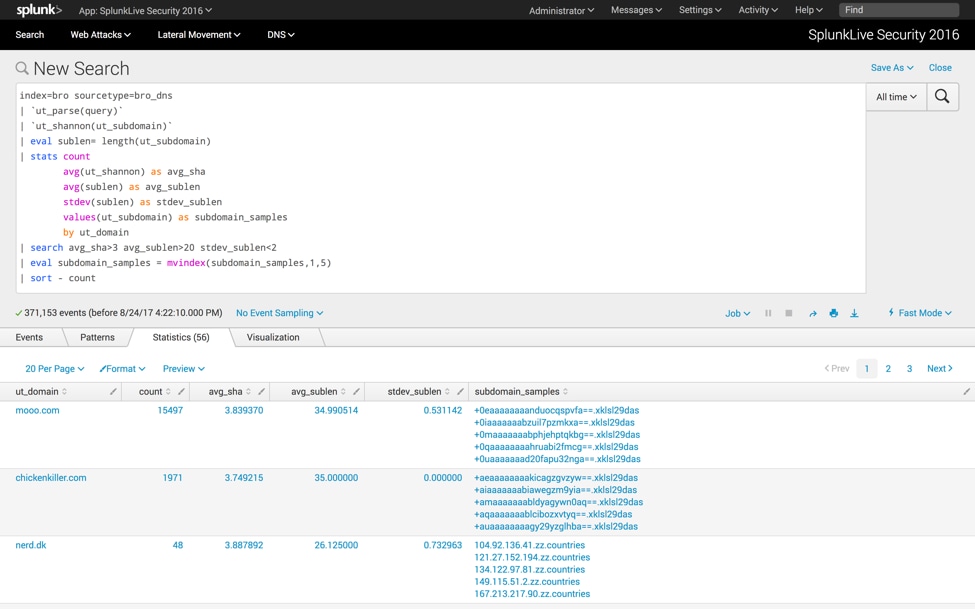 J’accuse! We start by parsing the query, just like we’ve always done. We calculate entropy on the subdomain and then start generating a count, average, and standard deviation based on the subdomain and entropy. Once calculations have been made, it's easy to filter down the results and sort to view.

While we've spent a good chunk of time on domains, it is important to understand that we can apply the same entropy techniques on any field in Splunk including file names on the local operating system. We could hypothesize that an adversary is launching processes from a user’s profile using randomized file paths: 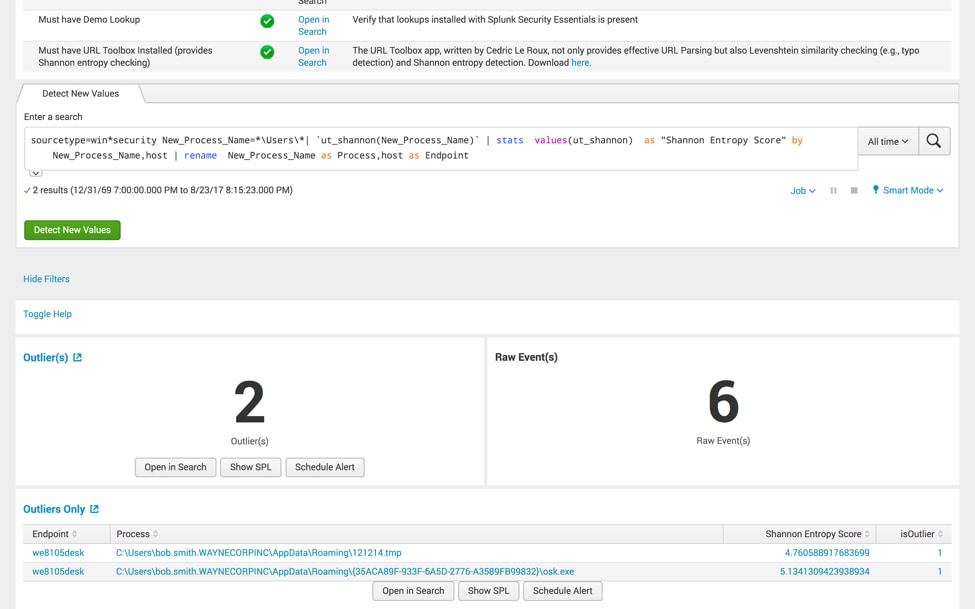 One note here—the usefulness of Shannon Entropy decreases as the string length increases. We’re looking to build machine learning-based randomness detection in Splunk Enterprise. If you’ve got a hankering to beta test, reach out!

You might be thinking, can we use Levenshtein for files if we can use Shannon entropy for files? Absolutely—Levenshtein can be used for typo-squatting processes! I might hypothesize that adversaries will hide processes from administrators by launching filenames that are very similar to legitimate Windows processes like explorer.exe, iexplore.exe, svchost.exe, or services.exe. 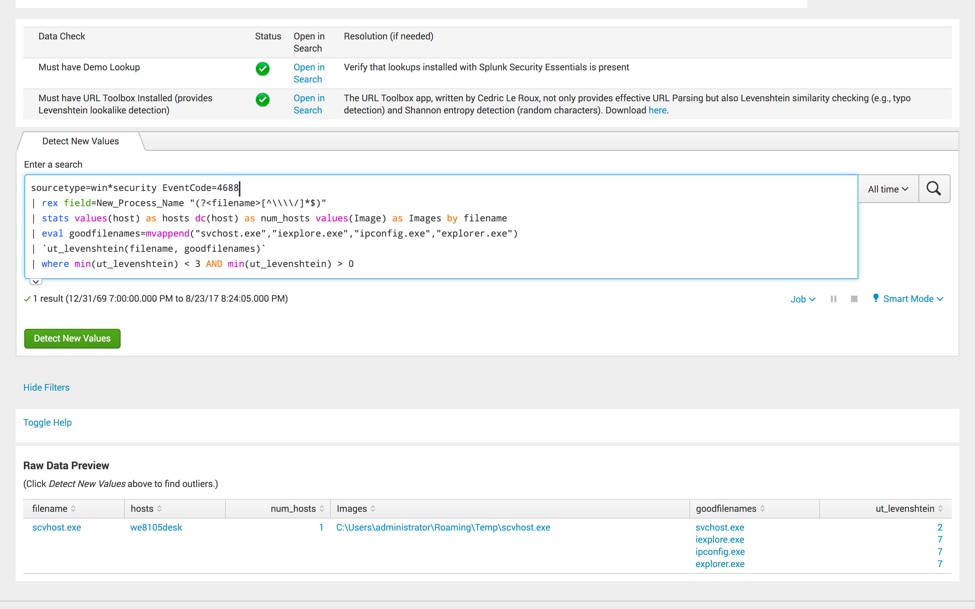 Now that wasn’t too bad, was it? Several different examples of using `ut_shannon(1)` and `ut_levenshtein(1)` to find badness with just math.

If all of this is very exciting to you and you want more, we'll leave you with one last area to explore. Cedric Le Roux recently put out one more app, called JellyFisher. JellyFisher is less flexible than URL Toolbox—without the same support for multi-value fields or caching—but it does add new algorithm choices, including Damerau-Levenshtein. This is like Levenshtein, but slightly better in that swapping two characters (like the “l” and “p” to create slpunk.com) only count as a distance of one. This means superior detection of adversary nastyiness! If you’re curious, check out the docs and go try out some new use cases.

Until next time, happy hunting! :-)

For more examples of Shannon Entropy check out these blogs by Ryan Kovar and Sebastien Tricaud: