There are several reasons why organizations in every industry are adopting microservices architectures. Working alongside hundreds of customers who are well ahead on the path to microservices, we have observed the top three benefits of these architectures:

According to IDC, microservices when combined with DevOps and agile methodologies will enable enterprises to dramatically accelerate their ability to push out digital innovation – at 50-100 times (or more) the frequency of traditional approaches and by 2022, 90% of all apps will feature microservices architecture.

These questions are easy to answer in a monolithic world, but microservices architectures can bring an SRE team to a halt without a new monitoring approach.

Fundamentally, a service mesh is a policy-driven proxy layer that channels all communication between microservices. Service meshes such as AWS App Mesh, incorporate a sidecar proxy with each instance of a microservice application. Each application communicates only with its local sidecar proxy, and in turn, the proxies communicate among themselves to form a mesh of services.

App Mesh uses Envoy, an open-source project that is governed by Cloud Native Computing Foundation (CNCF), as the data plane sidecar. Envoy intercepts all inbound and outbound network traffic and automatically implements cross-cutting concerns such as service discovery, capturing performance data, encrypting packets, traffic routing, authentication etc. The applications themselves never have to implement these common requirements, or even be aware that something interesting is being applied to the data. As shown in the following figure, application developers can focus on business logic and offload undifferentiated heavy-lifting to the service mesh. 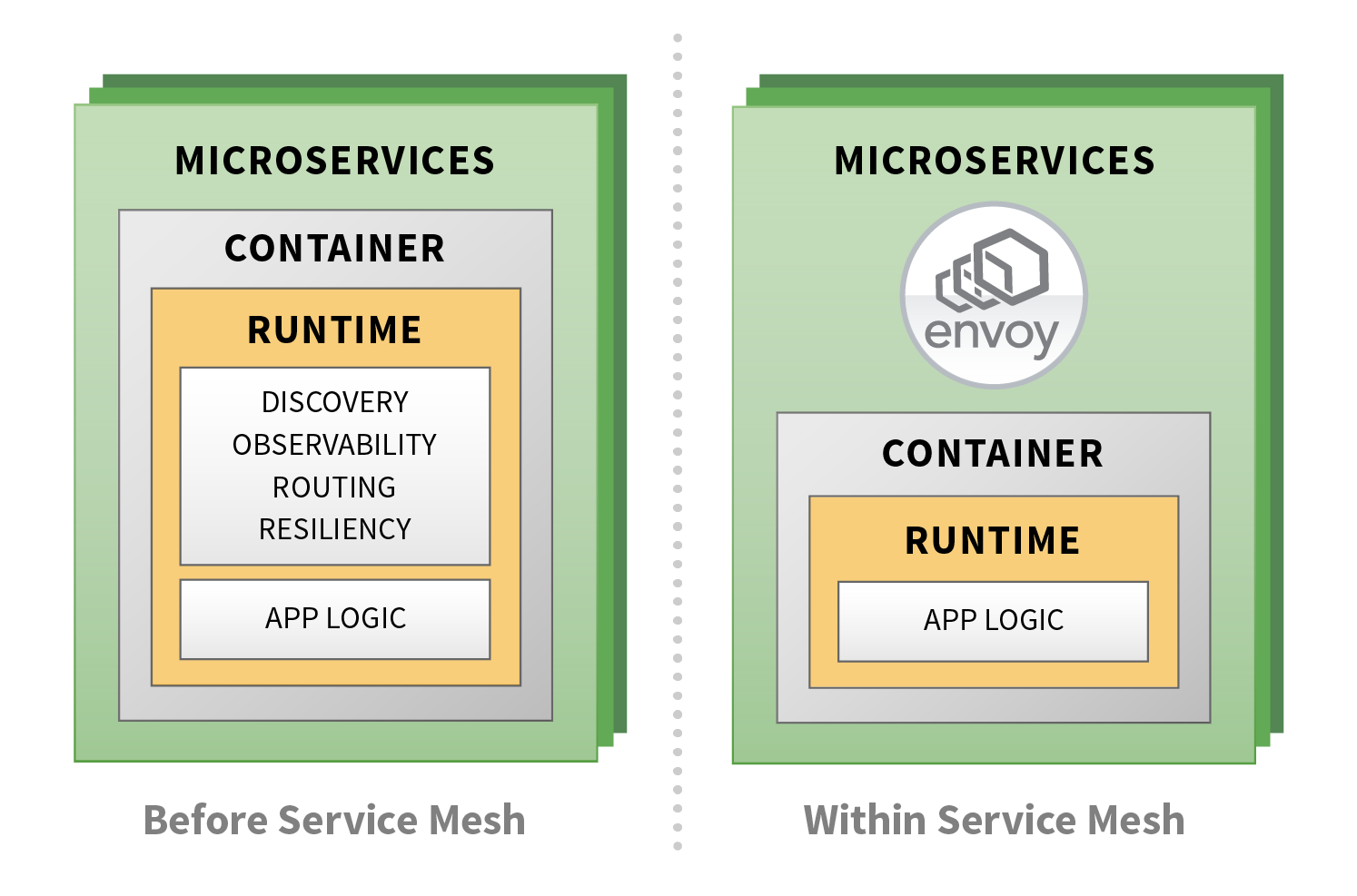 AWS App Mesh provides the logical control plane to configure and enforce policies for all of the running data planes in the mesh.

As AWS App Mesh reaches general availability today, we are excited to introduce the Splunk Infrastructure Monitoring integration for AWS App Mesh. This integration allows joint customers to easily plug the Splunk Infrastructure Monitoring platform in App Mesh deployments. Our partnership with AWS already allows customers to monitor a wide range of AWS services such as EC2, ECS, EKS, S3, EBS, AWS Lambda, DynamoDB, RDS and many more. We are excited to add support for App mesh right from the start.

Splunk Infrastructure Monitoring can seamlessly ingest microservices performance metrics and distributed traces from App Mesh to give you a complete view of the system performance from a single platform:

Out-of-the-box, Real-Time Visibility Into and Across Microservices

Customers get visibility and accurate alerting on the performance of their microservices without having to make any change to their application code.

Single Platform for Observability of the Full-Stack

Splunk Infrastructure Monitoring reduces MTTR and enables DevOps practices by having a single source of truth across infrastructure, Kubernetes platform, and deployed microservices. 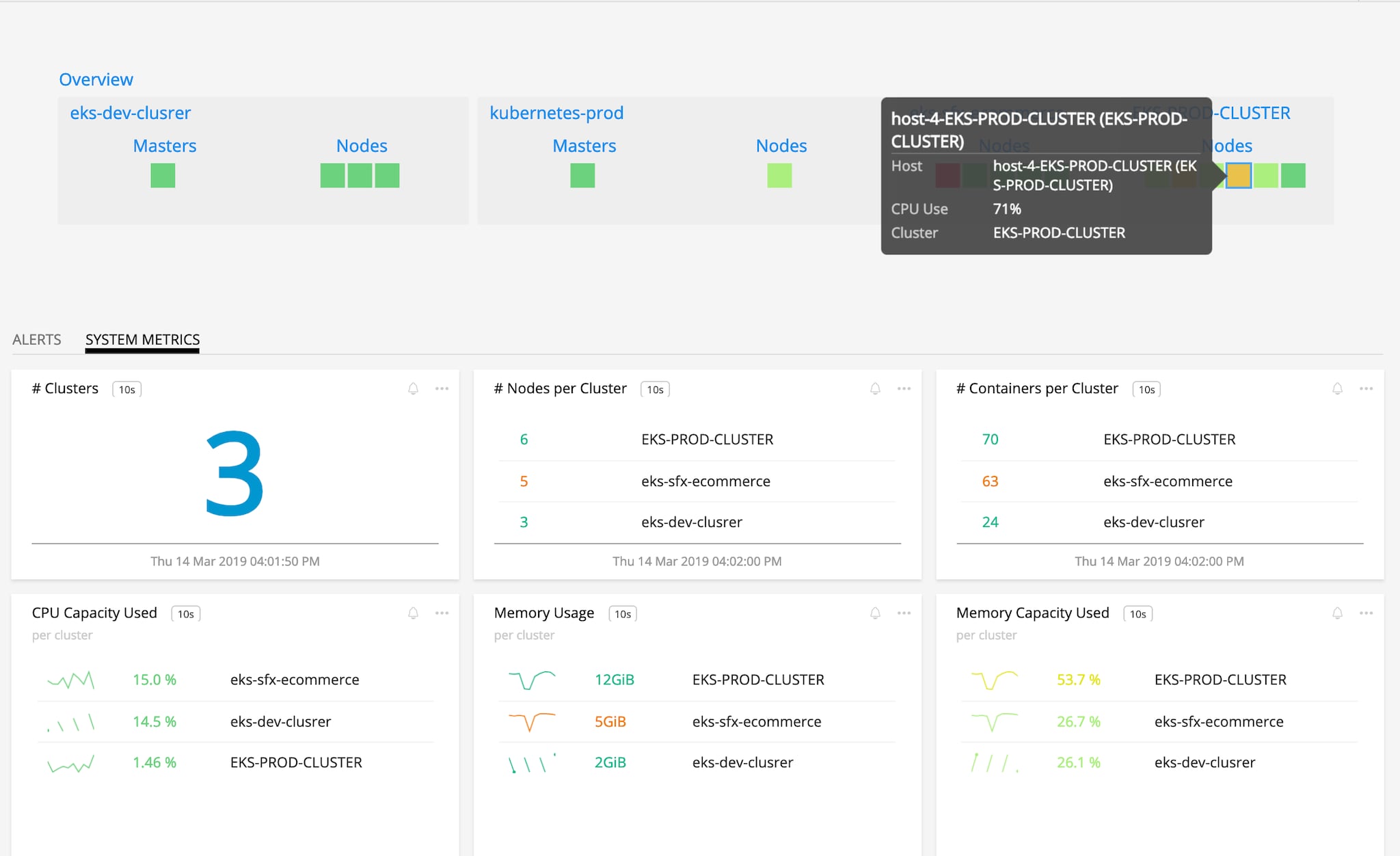 Traditional APM solutions use random sampling of data exported from App Mesh, thereby missing key insights as they analyze only the subset of data. Splunk Infrastructure Monitoring NoSample™ architecture analyzes every transaction exported by App Mesh and intelligently captures anomalous transactions so that you never miss outliers even the extreme P 99 ones. It also ensures that your real-time service dashboards and alerts are always accurate instead of approximations.

The concept of canary deployments in software release methodologies is inspired by ‘canary in the coal mine’. British miners would take canaries to the coal mine as the birds are more susceptible to dangerous gases than humans. If canary faints, humans would get out of the mine quickly.

Canary deployment has parallels. When a new version of an application is released, only a small portion of users are directed to that version. Perhaps only beta customers who were briefed about the new feature, or users from a particular geography, or just internal employees are directed to the canary version. Everyone else sees the stable version. Service Level Indicators (SLIs) are monitored, and if SLIs of canary indicate better performance than stable version then traffic is gradually increased to the canary version until the whole user population is switched.

The question then arises how can we route traffic dynamically? Implementing canary logic in the application code is an anti-pattern as it would take un-necessary cycles from developers to implement traffic routing.

Traffic routing can be implemented at the load balancer but LBs lack the application context to intelligently determine how to shape traffic. In addition, if agile DevOps practices and CI/CD capabilities are used then organizations would be shipping code multiple times every week or even every day. Manually updating load balancer policies is not sustainable.

Service meshes such as AWS App Mesh, by the virtue of intercepting ingress and egress traffic, can be leveraged to implement dynamic traffic routing.

The figure above shows a microservices-based application deployed on AWS App Mesh. Payment service has two versions – payment 1 is stable, and payment 2 is canary. 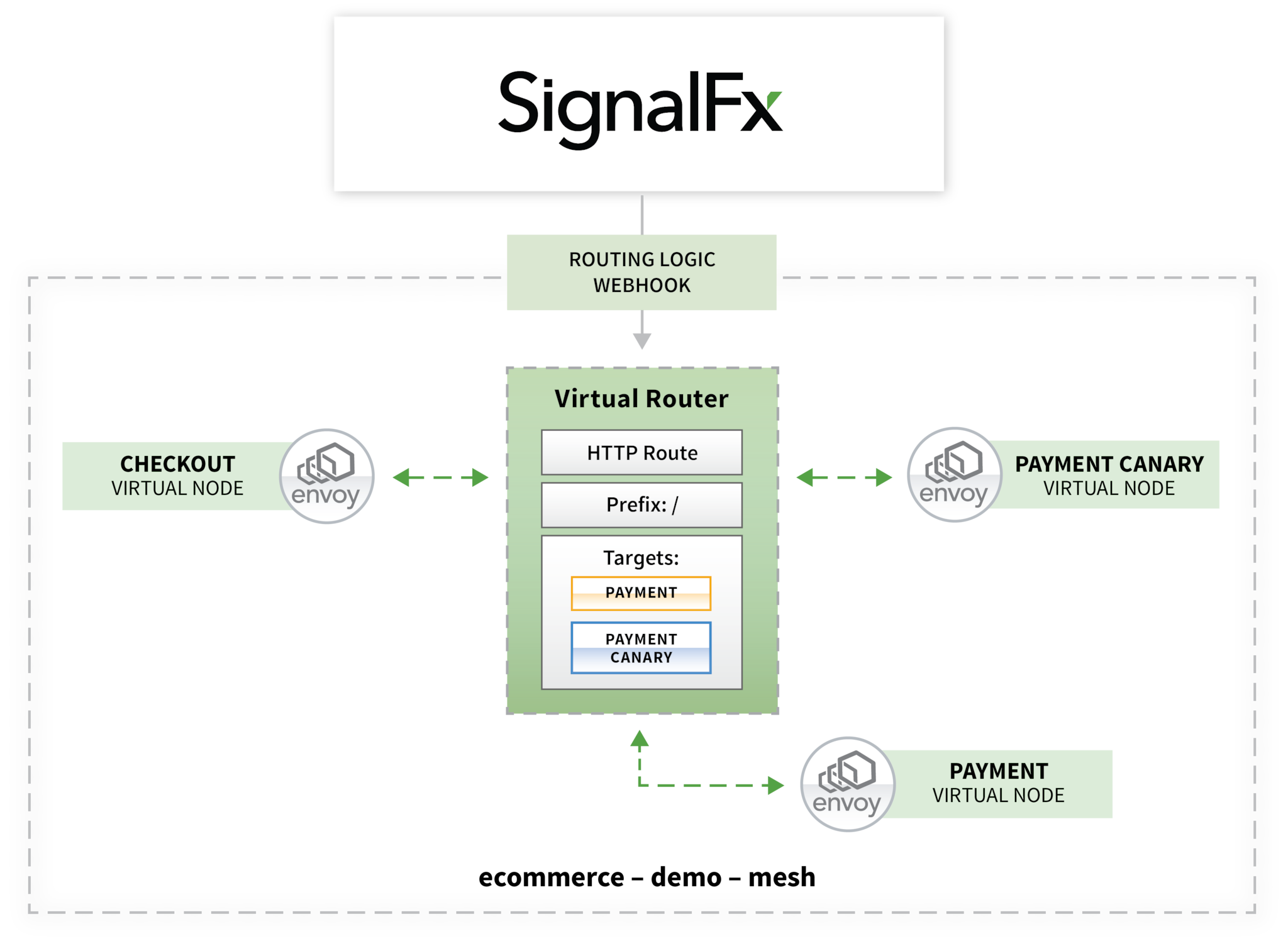 Splunk Infrastructure Monitoring's integration with AWS App Mesh can provide closed-loop automation to intelligently route traffic to canary or stable versions. Customers can define the logic for traffic shaping based on performance metrics. Within App Mesh every service has a Virtual Router to handle traffic between different version of the services deployed. Splunk Infrastructure Monitoring evaluates accurate performance characteristics and dynamically updates Route weights by calling AWS App Mesh APIs via a webhook.

Service meshes can be a critical part of your observability strategy as they provide a consistent way to capture performance data. Splunk Infrastructure Monitoring is the only solution which analyzes every transaction from AWS App Mesh, provides out-of-the-box visibility, real-time monitoring and precise alerting on microservices performance. Once outlier transactions are identified, Splunk Infrastructure Monitoring provides directed troubleshooting to quickly determine the root cause and significantly reduce MTTR.