If you're already excited about Apache Pulsar (like we are), then prepare to get really excited, because a new feature is coming that will open up bold new horizons for the future of both Pulsar and the entire messaging space: Pulsar Functions, a lightweight compute framework for Pulsar inspired by stream processing engines like Heron and Function as a Service platforms like AWS Lambda and Google Cloud Functions. Pulsar Functions enables you to easily deploy and manage processing functions that consume messages from and publish messages to Pulsar topics.

Pulsar has already been gaining significant traction in the messaging space over the last few months for a variety of reasons: it's the only open source messaging platform that unifies queuing and streaming, was built to be multi tenant from the ground up, offers multi-datacenter geo-replication out of the box, guarantees effectively-once message delivery semantics, and much more.

With the introduction of Pulsar Functions, you can now use Pulsar as an all-in-one messaging/compute/storage system. Just deploy a Pulsar cluster and you have a ready-made compute engine with a simple interface at your disposal.

How Does Pulsar Functions Work?

When you deploy functions in cluster mode, state storage will be automatically handled by Apache BookKeeper.

At the moment, you can use Pulsar with just about any compute or stream processing engine (SPE) that you like, such as Heron. The beauty of Pulsar Functions, though, is that you can have the benefits of an SPE without needing to deploy one.

If you've ever wanted to perform simple processing of data from your message bus but didn’t want to stand up and configure a whole stream processing cluster to do so, Pulsar Functions is the solution for you. With an extremely simple API, users can consume data from Pulsar topics, process the data using custom-built logic, and, if necessary, write results back into other Pulsar topics. In Java, for example, a user can simply implement the java.util.function.Function interface, which has just a single apply method. Here's an example:

In its simplest form, you don’t even need an SDK to implement a Pulsar Function! If the user needs context-related information, such as the name of the function, the user can just implement the PulsarFunction interface instead of the Java Function interface. Here's an example:

As you can probably tell from the API, we decided to call this framework Pulsar Functions because it is literally just a function. Extremely simple and straightforward.

Users can either run a Pulsar Function via "local run" mode, which means that the user determines where the function runs (for example on their laptop),or users can submit a Pulsar Function to a Pulsar cluster and the cluster will take charge of running the function. We will discuss both modes in detail later in this post.

From the experiences we had in the industry, we've noticed that a significant portion of data processing use cases are simple and lightweight. Such use cases include:

We developed Pulsar Functions not only to address such use cases, but also, and more importantly, to greatly simplify deployment, reduce development time, and maximize developer productivity. We put special emphasis on simplicity due to the feedback we often get from users in the industry. We became aware of several major pain points that were plaguing users again and again:

With this feedback in mind, we outlined several goals for the design of Pulsar Functions:

With these goals in mind, we developed the Pulsar Functions runtime to be the following.

Pulsar Functions also provides a number of runtimes to execute functions written in different programming languages. Pulsar Functions currently supports only Java and Python, but many more languages will be added in the future!

Figure 1 below depicts the runtime for Pulsar Functions. 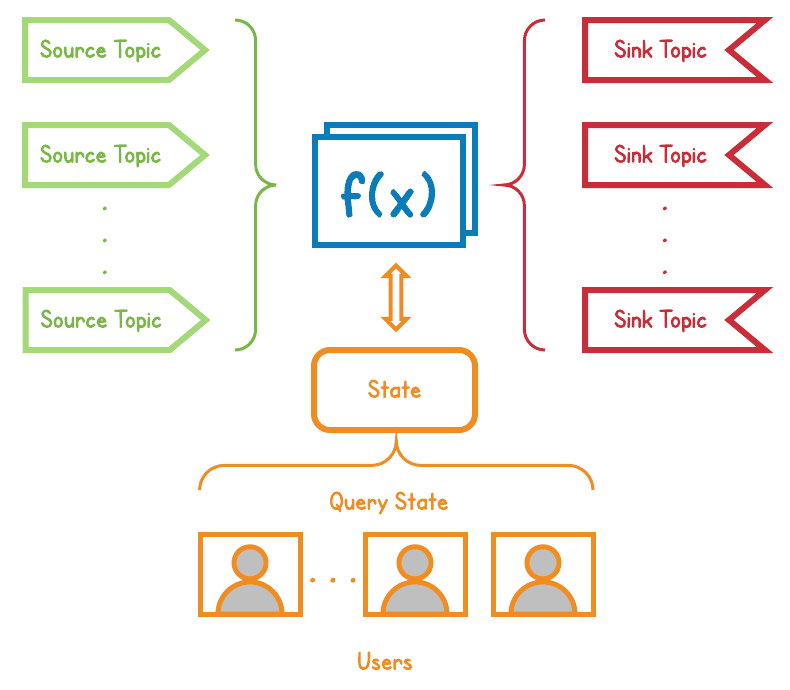 A Pulsar Function can consume from one or more Pulsar topics and, optionally, write results back to one more Pulsar topics. There are one or more instances of a Pulsar Function executing the processing logic defined by the user. A function can use the provided state interface to persist intermediate results. Other users can query the state of the function to extract these results.

The easiest way to run a Pulsar Function is to instantiate a runtime and a function and run them locally (local run mode). A helper command-line tool makes this very simple. In local run mode, the function runs as a standalone runtime and can be monitored and controlled by any process, Docker container, or thread control mechanisms available. Users can spawn these runtimes across machines manually or use sophisticated schedulers like Mesos/Kubernetes to distribute them across a cluster. Below is an example of the command to start a Pulsar function in “localrun” mode:

Another option is to place the entire configuration for the function in a YAML file, like this:

If you configure a function via YAML, you can use this much simpler create command:

Pulsar Functions offer the following processing semantics, which can be specified on a per-function basis:

Check out our previous blog post for a more detailed discussion of the differences between these processing semantics.

Effectively-once processing is essentially achieved using a combination of at-least-once processing and server-side message deduplication. This means that a state update can happen twice, but that state update will only be  applied  once, while any duplicated state are discarded at the server side.

Here are some of the features that likely follow the initial Pulsar Function implementation in the coming months:

In this introductory post, we hope to have piqued your interest in Pulsar Functions. Please stay tuned for follow-up blog posts on Pulsar Functions that will cover individual components and features in more depth. In the meantime, check out some of our other recent posts about Pulsar: