Exactly Once Is NOT Exactly the Same

Distributed event stream processing has become an increasingly hot topic in the area of Big Data. Notable Stream Processing Engines (SPEs) include Apache Storm, Apache Flink, Heron, Apache Kafka (Kafka Streams), and Apache Spark (Spark Streaming). One of the most notable and widely discussed features of SPEs is their processing semantics, with "exactly-once" being one of the most sought after and many SPEs claiming to provide "exactly-once" processing semantics.

Stream processing, sometimes referred to as event processing, can be succinctly described as continuous processing of an unbounded series of data or events. A stream- or event-processing application can be more or less described as a directed graph and often, but not always, as a directed acyclic graph (DAG). In such a graph, each edge represents a flow of data or events and each vertex represents an operator that uses application-defined logic to process data or events from adjacent edges. There are two special types of vertices, commonly referenced as sources and sinks. Sources consume external data/events and inject them into the application while sinks typically gather results produced by the application. Figure 1 below depicts an example a streaming application. 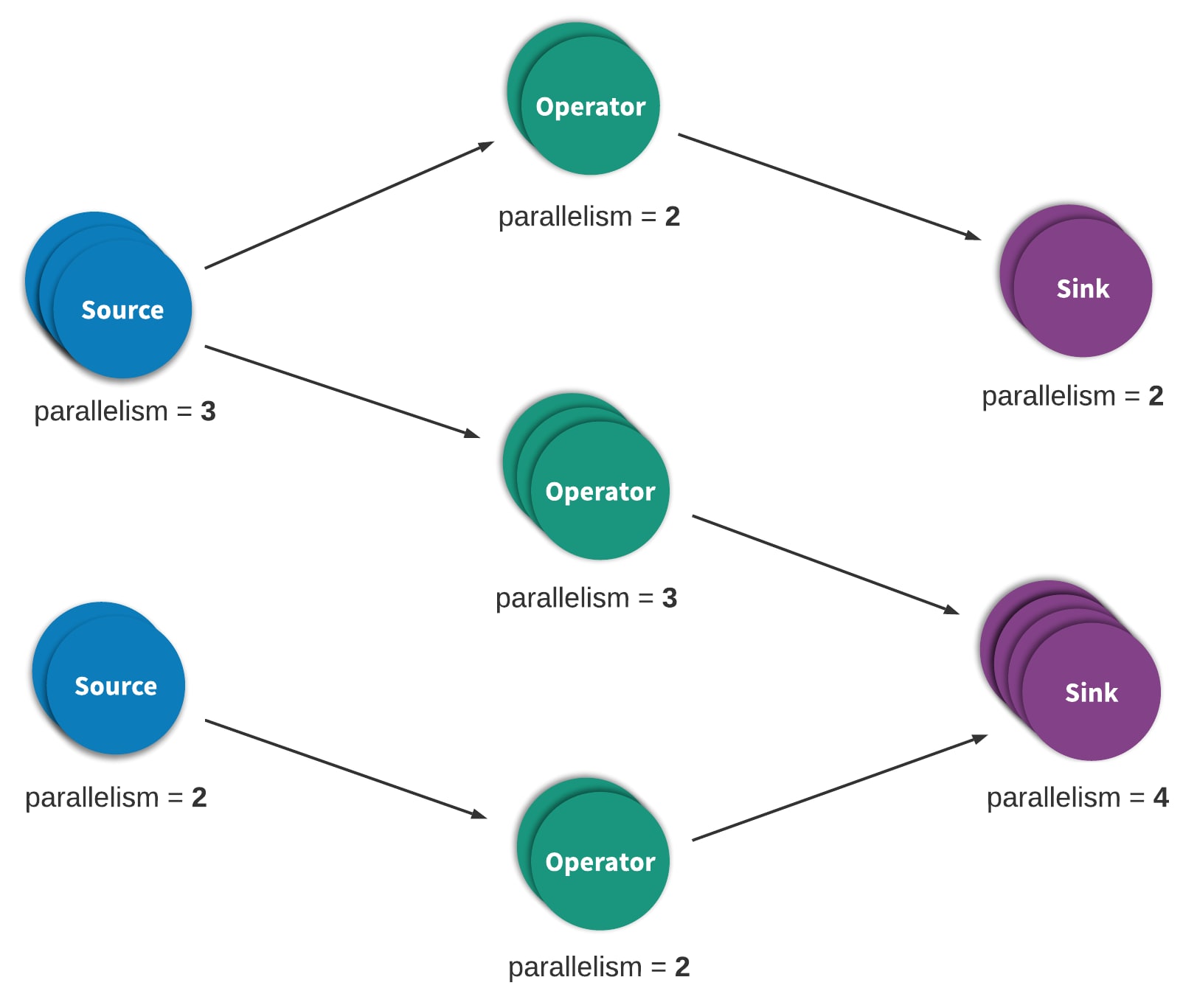 An SPE that executes a stream/event processing application usually allows users to specify a reliability mode or processing semantics that indicates which guarantees it will provide for data processing across the entirety of the application graph. These guarantees are meaningful since you can always assume the possibility of failures via network, machines, etc. that can result in data loss. Three modes/labels, at-most-once, at-least-once, and exactly-once, are generally used to describe the data processing semantics that the SPE should provide to the application.

Here’s a loose definition of those different processing semantics:

This is essentially a "best effort" approach. Data or events are guaranteed to be processed at most once by all operators in the application. This means that no additional attempts will be made to retry or retransmit events if it was lost before the streaming application can fully process it. Figure 2 illustrates an example of this.

Data or events are guaranteed to be processed at least once by all operators in the application graph. This usually means an event will be replayed or retransmitted from the source if the event is lost before the streaming application fully processed it. Since it can be retransmitted, however, an event can sometimes be processed more than once, thus the at-least-once term. Figure 3 illustrates an example of this. In this case, the first operator initially fails to process an event, then succeeds upon retry, then succeeds upon a second retry that turns out to have been unnecessary.

Events are guaranteed to be processed "exactly once" by all operators in the stream application, even in the event of various failures.

The distributed snapshot/state checkpointing method of achieving "exactly-once" is inspired by the Chandy-Lamport distributed snapshot algorithm.1 With this mechanism, all the state for each operator in the streaming application is periodically checkpointed, and in the event of a failure anywhere in the system, all the state of for every operator is rolled back to the most recent globally consistent checkpoint. During the rollback, all processing will be paused. Sources are also reset to the correct offset corresponding to the most recent checkpoint. The whole streaming application is basically rewound to its most recent consistent state and processing can then restart from that state. Figure 4 below illustrates the basics of this mechanism. 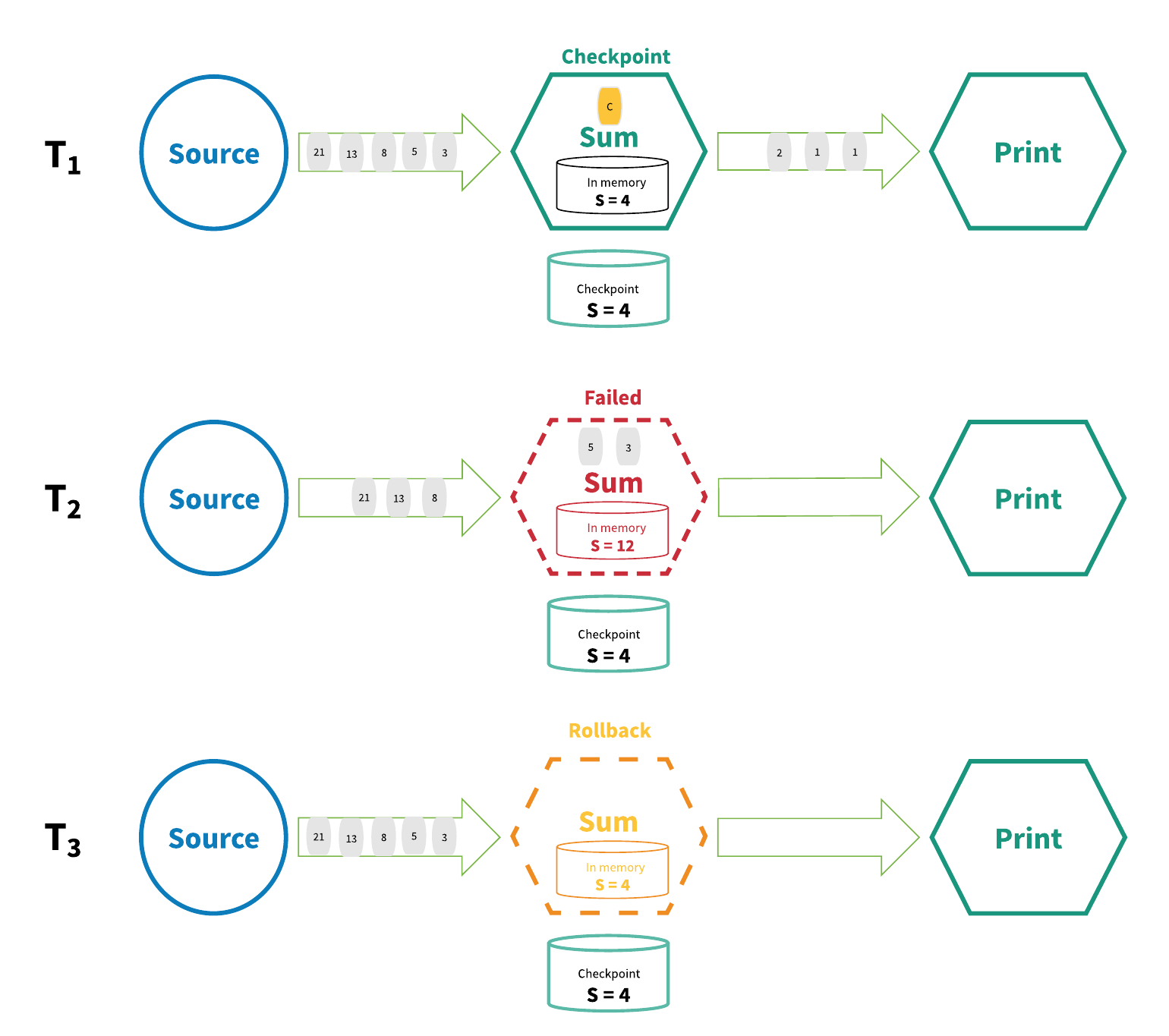 In Figure 4, the streaming application is working normally at T1 and the state is checkpointed. At time T2, however, the operator fails to process an incoming datum. At this point, the state value of S = 4 has been saved to durable storage, while the state value S = 12 is held in the operator’s memory. In order to overcome this discrepancy, at time T3 the processing graph rewinds the state to S = 4 and "replays" each successive state in the stream up to the most recent, processing each datum. The end result is that some data have been processed multiple times, but that’s okay because the resulting state is the same no matter how many rollbacks have been performed.

Another method used to achieve "exactly-once" is through implementing at-least-once event delivery in conjunction with event deduplication on a per-operator basis. SPEs utilizing this approach will replay failed events for further attempts at processing and remove duplicated events for every operator prior to the events entering the user defined logic in the operator. This mechanism requires that a transaction log be maintained for every operator to track which events it has already processed. SPEs that utilize a mechanism like such are Google’s MillWheel2 and Apache Kafka Streams. Figure 5 illustrates the gist of this mechanism.

Now let’s reexamine what the "exactly-once" processing semantics really guarantees to the end user. The label "exactly-once" is misleading in describing what is done exactly once.

Some might think that "exactly-once" describes the guarantee to event processing in which each event in the stream is processed only once. In reality, there is no SPE that can guarantee exactly-once processing. To guarantee that the user-defined logic in each operator only executes once per event is impossible in the face of arbitrary failures, because partial execution of user code is an ever-present possibility.

Consider the scenario where you have a stream processing operator that performs a map operation that prints the ID of an incoming event and then returns the event unchanged. The pseudocode below illustrates this operation:

Each event has a GUID (Global Unique ID). If exactly-once execution of the user logic can be guaranteed then the event ID will be only printed out once. However, this can never be guaranteed, as failures can happen at any time and at any point in the execution of the user-defined logic. The SPE cannot determine on its own the point up to which the user-defined processing logic has been executed. Thus, arbitrary user-defined logic is not guaranteed to be executed only once. This also implies that external operations, such as database writes, implemented in user defined logic is also not guaranteed to executed exactly once. Such operations would still be need to be implemented in an idempotent fashion.

So what does SPEs guarantee when they claim "exactly-once" processing semantics? If user logic cannot be guaranteed to be executed exactly once then what is executed exactly once? When SPEs claim "exactly-once" processing semantics, what they’re actually saying is that they can guarantee that updates to state managed by the SPE are committed only once to a durable backend store.

The committing of state or applying updates to the durable backend that is the source of truth can be described as occurring exactly-once. Computing the state update/change, i.e. processing the event that is executing arbitrary user -defined logic on the event, however, can happen more than once if failures occur, as mentioned above. In other words, the processing of an event can happen more than once but the effect of that processing is only reflected once in the durable backend state store. Here at Streamlio, we’ve decided that effectively-once is the best term for describing these processing semantics.

From a semantic point of view, both the distributed snapshot and at-least-once event delivery plus deduplication mechanisms provide that same guarantee. Due to differences in implementation between the two mechanisms, however, there are significant performance differences.

Though there are differences between the distributed snapshot and at-least-once event delivery plus deduplication mechanisms from a theoretical point of view, both can be reduced to at-least-once processing plus idempotency. For both mechanisms, events will be replayed/retransmitted when failures occur (implementing at-least-once), and through state rollback or event deduplication, operators essentially become idempotent when updating internally managed state.

In this blog post, I hope to have convinced you that the term "exactly-once" is very misleading. Providing "exactly-once" processing semantics really means that distinct updates to the state of an operator that is managed by the stream processing engine are only reflected once. "Exactly-once" by no means guarantees that processing of an event, i.e. execution of arbitrary user-defined logic, will happen only once. Here at Streamlio, we prefer the term effectively once for this guarantee because processing is not necessarily guaranteed to occur once but the effect on the SPE-managed state is reflected once. Two popular mechanisms, distributed snapshot and dessage deduplication, are used to implement exactly/effectively-once processing semantics. Both mechanisms provide the same semantic guarantees to message processing and state updates but there are nonetheless differences in performance. This post is not meant to convince you that either mechanism is superior to the other, as each has its pros and cons.

Exactly Once Is NOT Exactly the Same