Apache BookKeeper is an enterprise-grade storage system designed to provide strong durability guarantees, consistency, and low latency. It was originally developed at Yahoo! Research as a high availability (HA) solution for the Hadoop Distributed File System (HDFS) NameNode, which had previously been a highly problematic single point of failure in the system. BookKeeper was incubated as a subproject under Apache ZooKeeper since 2011 and graduated to being a Top-level Project in January, 2015. For over 4 years, BookKeeper has been widely adopted by enterprises like Twitter, Yahoo and Salesforce to store and serve mission-critical data and supporting different use cases. In this blog post, we provide a gentle introduction to concepts of BookKeeper and terminology.

A Little Bit of History

The authors of BookKeeper—Benjamin Reed, Flavio Junqueira, and Ivan Kelly—used their experience building ZooKeeper to design a flexible system for supporting various workloads. In addition to its primary use as a Write-ahead Logging (WAL) mechanism for distributed systems. BookKeeper has grown beyond its original scope and has become a fundamental building block for several enterprise-grade systems, including Twitter’s EventBus and Yahoo’s Apache Pulsar (incubating).

BookKeeper is a scalable, fault-tolerant, and low-latency storage service optimized for real-time workloads. Based on our several years of experience, an enterprise-grade, real-time storage platform should have the following requirements:

BookKeeper was designed to meet these requirements and is widely deployed to serve several use cases, such as building high availability or replication facilities for distributed systems (e.g. the HDFS NameNode, Twitter’s Manhattan key-value store), providing replication between machines in a single cluster and also across clusters (multi-datacenter replication), serving as a store for publish/subscribe (pub-sub) messaging systems, Twitter’s EventBus and Apache Pulsar (incubating), and also storing immutable objects for streaming jobs, for example snapshots of checkpointed data.

BookKeeper provides replicated, durable storage of log streams, that is, streams of records that form a sequence with a well-defined order.

Data is written into logs in Apache BookKeeper as a sequence of indivisible records rather than as individual bytes. A record is the smallest I/O unit in BookKeeper, as well as the unit of address. Each record contains sequencing numbers (e.g. monotonically increasing long numbers) associated with or assigned to it. Clients always start reading from a particular record, or they tail a sequence, which means that they listen to the sequence for the next record to be appended to the log. Clients can receive data one record at a time or in chunks of multiple records. Sequencing numbers can also be used for retrieving records randomly.

BookKeeper provides two storage primitives for representing logs: one is the ledger (aka log segment); the other is the stream (aka log stream).

A ledger is a sequence of data records that gets terminated either when a client explicitly closes it or when a writer—a client who writes records into it—has crashed. Once a ledger is sealed, no records can be appended to it. The ledger is the lowest-level storage primitive in BookKeeper. Ledgers can be used for storing either bounded sequences of data or unbounded streams. 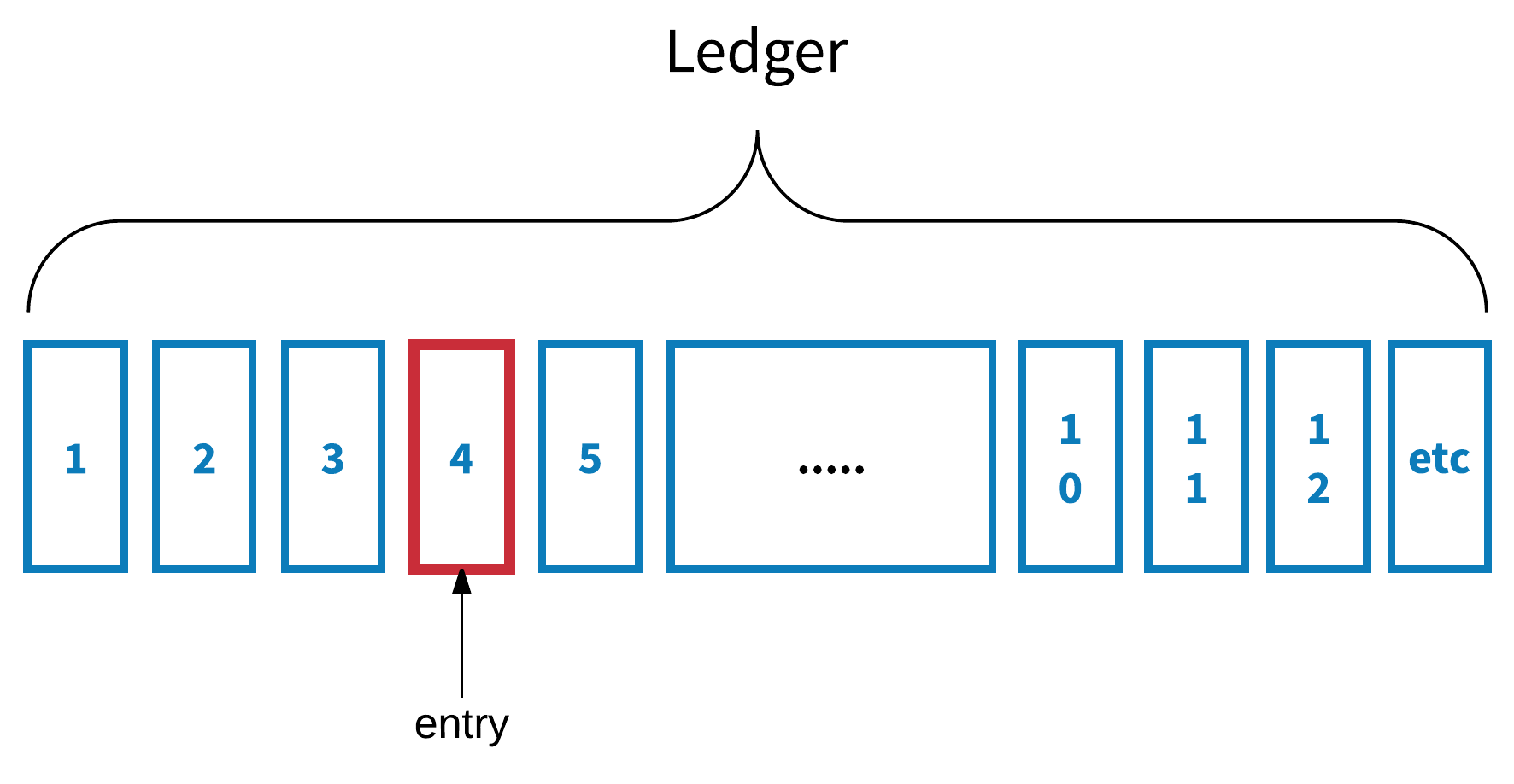 A stream (aka log stream) is an unbounded, infinite sequence of data records, which by default will never be terminated. Unlike a ledger, which can only be opened one time to append records, a stream can be opened multiple times to append records. A stream is physically comprised of multiple ledgers; each ledger is rotated according to either a time- or space-based rolling policy. Streams are expected to live for a relatively long time—days, months, or even years—before being deleted. The primary data retention mechanism for streams is truncating, which involves dropping the oldest ledgers according to either a time- or space-based retention policy.

BookKeeper replicates and stores data entries across multiple storage servers called bookies. A bookie is an individual BookKeeper storage server that stores data records. For the sake of performance, individual bookies store fragments of ledgers rather than entire ledgers. Bookies thus function as part of an ensemble. For any given ledger L, an ensemble is the group of bookies storing the entries in L. Whenever entries are written to a ledger, they are striped across the ensemble (written to a sub-group of bookies rather than to all bookies).

BookKeeper requires a metadata storage service to store information related to ledgers and available bookies. It currently uses ZooKeeper for this task (as well as for some other coordination and configuration management tasks).

The choice of which API to use depends on how much granular control you need over ledger semantics. Both APIs can be simultaneously used within a single application as well.

Tying It All Together 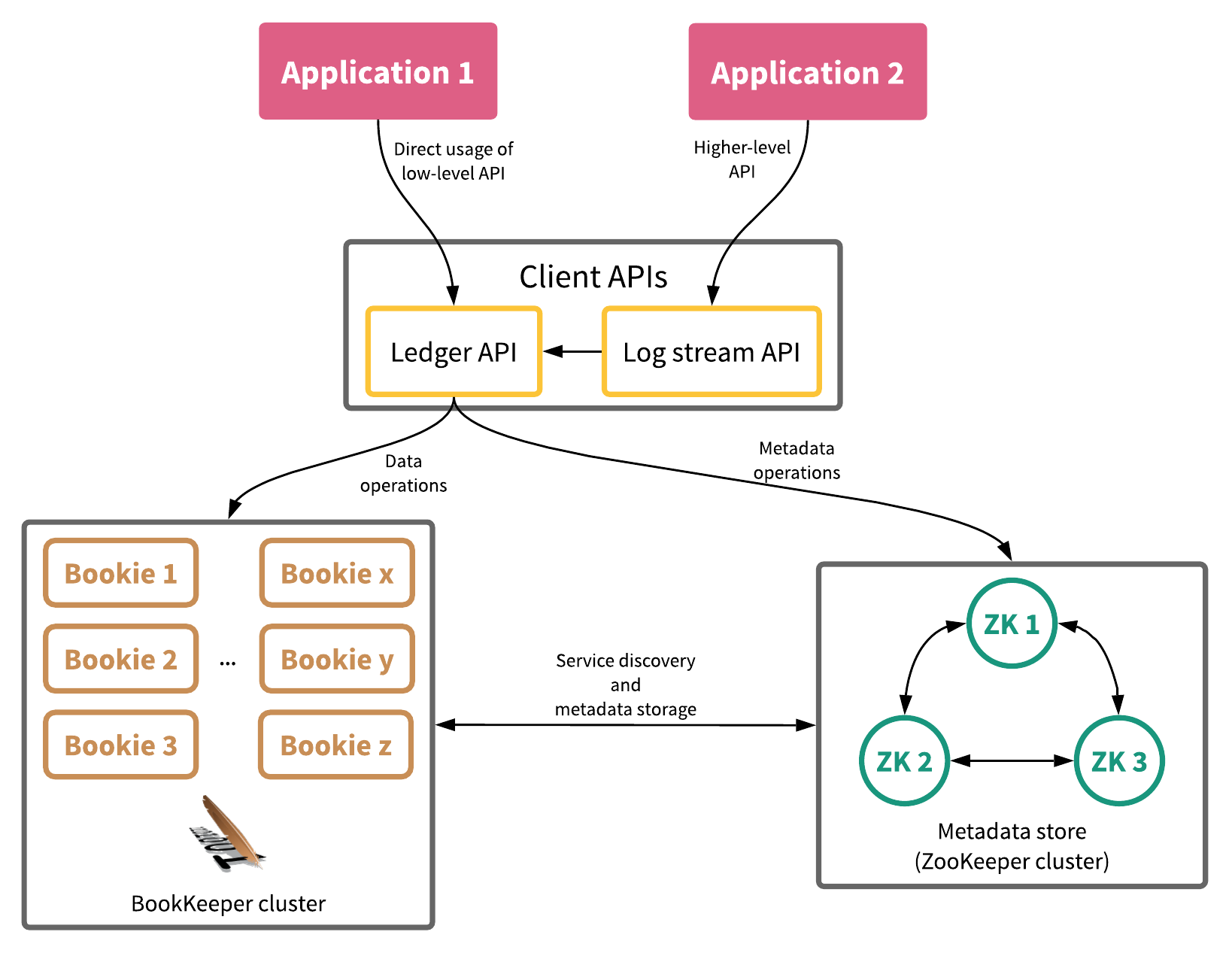 A few things to note in this diagram:

This post provided a high-level overview of BookKeeper and introduced the concepts of entries, ledgers, streams, namespaces, and bookies. Finally, we saw what a typical BookKeeper deployment looks like and how data flows through it. In the next blog post, we’ll examine how BookKeeper provides consistency, durability, and low latency.

If you’re interested in BookKeeper or DistributedLog, you may want to participate in the BookKeeper community via: