The promise of NoSample™ full-fidelity distributed tracing with unlimited cardinality exploration is that no application performance degradation will be sampled away. This ensures that executions, which exemplify problems related to latency and/or errors will be retained for further inspection and analysis. Additional value can be extracted from trace data by determining when such investigations should occur, in other words, by identifying spikes and anomalies in endpoint latency or error rate. This is now possible with Splunk APM with the release of μAPM Alerts.

Splunk μAPM alerts follow the general strategy of alerting on aggregates and trends, then using alerts as a trigger for deeper analysis and investigation (whether manual or automated). In this case, the aggregates are captured as μAPM metrics (per-span statistical summaries), which have powered visualization and troubleshooting use cases for some time via built-in charts and dashboards. By leveraging our best-in-class metrics monitoring and alerting platform, μAPM detectors and alerts go a step further in facilitating a troubleshooting workflow.

From Spike to Trace 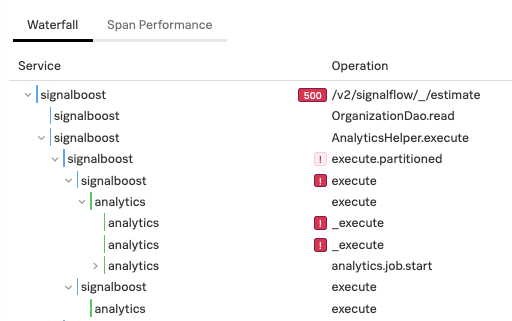 In this post we will explain the inner workings of μAPM alerts, as well as some of the motivating statistical principles.

An Overview of the Options 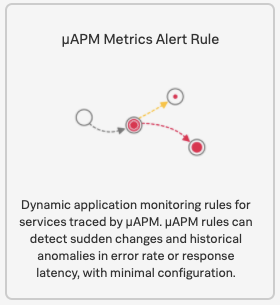 For latency alerts, there are five basic options, corresponding to the product of:

Aside from the qualitative choice among the four dynamic thresholds, the sensitivity of the alert is influenced by the required discrepancy from the baseline, and the lengths of the time windows (durations appearing in the underlying program). The Sudden Change and Historical Anomaly alerts are qualitatively similar to the Infrastructure built-in alerts with the same names, but the implementation is somewhat different. See the next section for details.

For error alerts, there are two basic options:

For both latency and error rate, μAPM static threshold detectors allow for comparisons to distinct trigger and clear thresholds (and durations), to eliminate possibly flappy alerts. By contrast, clear conditions for Infrastructure static threshold detectors are supported via SignalFlow API, but are not yet supported in the Splunk UI. Motivation for clear conditions and a recipe for constructing them in the Plot Builder (no longer necessary since SignalFlow detect blocks accept an “off” condition) can be found here, the basic point being that when a signal hovers around the threshold value, a separate clear condition allows this to be treated as a single incident rather than several.

Anomaly detection typically involves comparing distributions (e.g., the values of the last 5 minutes against the values of the preceding hour). When histograms are available, this can be accomplished by quantile comparison, or by using robust measures of center and spread, often the median and interquartile range (the difference between the 75th and 25th percentiles, often written IQR).

For Sudden Change and Historical Anomaly latency alerts, our definition of “deviations from the norm” is non-standard (and differs from that used in the Infrastructure built-in conditions) and deserves some discussion. A “deviation” in this context is the difference between the 90th and 50th percentiles, and is adapted to the characteristics of latency distributions.

Analysis of percentiles provides an important but incomplete picture of the health of an endpoint, and alerts based purely on the calculations described so far can be somewhat noisy. To this end, μAPM detectors make use of SignalFlow support for compound alert conditions (configuring an alert to trigger on a condition of the form “A and B,” for example) and make it possible to easily incorporate also the volume of traffic an endpoint receives in determining when an alert should trigger. As a consequence, alerts for sparse data can be suppressed.

For latency detectors, one volume parameter is “Min. req/sec (absolute),” which is the minimum request rate (expressed as requests per second) required in the current window for the alert to trigger. Note the default value of 0 means this volume condition has no effect. The other volume parameter is “Min. req/sec (% of history),” which is the minimum request rate, as a percentage of the historical request rate, required in the current window to trigger or clear the alert. The historical request rate is calculated on the same time windows used to determine the baseline and threshold (e.g., the immediately preceding window, or the same window from prior weeks); for the static threshold detector, the historical window is five times longer than and immediately precedes the trigger duration period.

A request volume condition for error rate detectors is also exposed. This can be used to ensure, for example, that an endpoint that receives just a few requests, one of which is an error, does not trigger an alert.

The alerting patterns are applicable to other scenarios (the approach to latency may be applied more generally when distribution and count data are available, and the approach to error rate may be applied to other rates), but they are substantially more specialized than the strategies that power the Infrastructure built-in alerts.

The apm module of the SignalFlow Library lies underneath the μAPM alert conditions. As with other SignalFlow modules, apm contains some intermediate calculations which may provide useful visualizations or ingredients for other alerting schemes (e.g., combining built-in conditions with custom thresholds). For example, the error_rate function calculates the error rate for a specified set of operations over a specified duration.

For μAPM detectors, we have implemented some enhancements to the data visualized in the incident modal. Here is an example.