Let’s quickly recap the fundamentals of a Kubernetes cluster. It is composed of a Kubernetes Master and Nodes. A Kubernetes Master is a collection of three processes that run on a single node in your cluster, which is designated as the master node. Those processes are: kube-apiserver, kube-controller-manager and kube-scheduler.* A special object within the cluster master is Etcd which stores the entire estate of the cluster, its configuration, specifications and the statuses of the running workloads.

The none master nodes in a cluster run two processes. The Kubelet, is a node agent that communicates with master node and Kube Proxy, the network proxy used by the cluster components to communicate. Other components of the cluster are CAdvisor which is an open source resource usage collector (Web Interface), and of course Kube-Nodes which are the worker machines in the cluster.

Composed of several abstractions defined as objects, they are important to understand when looking at the functioning of a Kubernetes cluster and of course its attack surface.

These objects are described as:

There are also other abstractions for functionality references within the kubernetes architecture such as Deployment, DaemonSet, StatefulSet, ReplicaSet and Job. These objects are specifically designed to provide specific configuration and function items within a Kubernetes cluster.

There are some Kubernetes objects that deserve special attention because of their value from a security perspective. Those objects are ConfigMaps and Secrets. Let’s look at why these 2 objects are important to look for after to keep clusters safe.

From the access perspective when looking at a Kubernetes cluster it is important to look at specific ports for Kubernetes objects and services. Specifically those that can expose the Kubernetes API, the Kubelet or any other component to external unauthorized access and possibly allow attackers to send malicious data.

After this quick recap let's take a look at the new detection searches and analytic stories for Azure Kubernetes. First let's look at Kubernetes Azure Scan fingerprint detection. This detection aims to provide information on possible fingerprinting scans from the internet. The main fields used for this detection are: source ip address, user agent, http verb, requested URI and response status. In the following screenshot we can see for example user agent strings for Zgrab , a scanning tool popular for discovering and fingerprinting hosts on the internet.

In some cases banners for popular vulnerability scanner Nmap can be clearly observed. 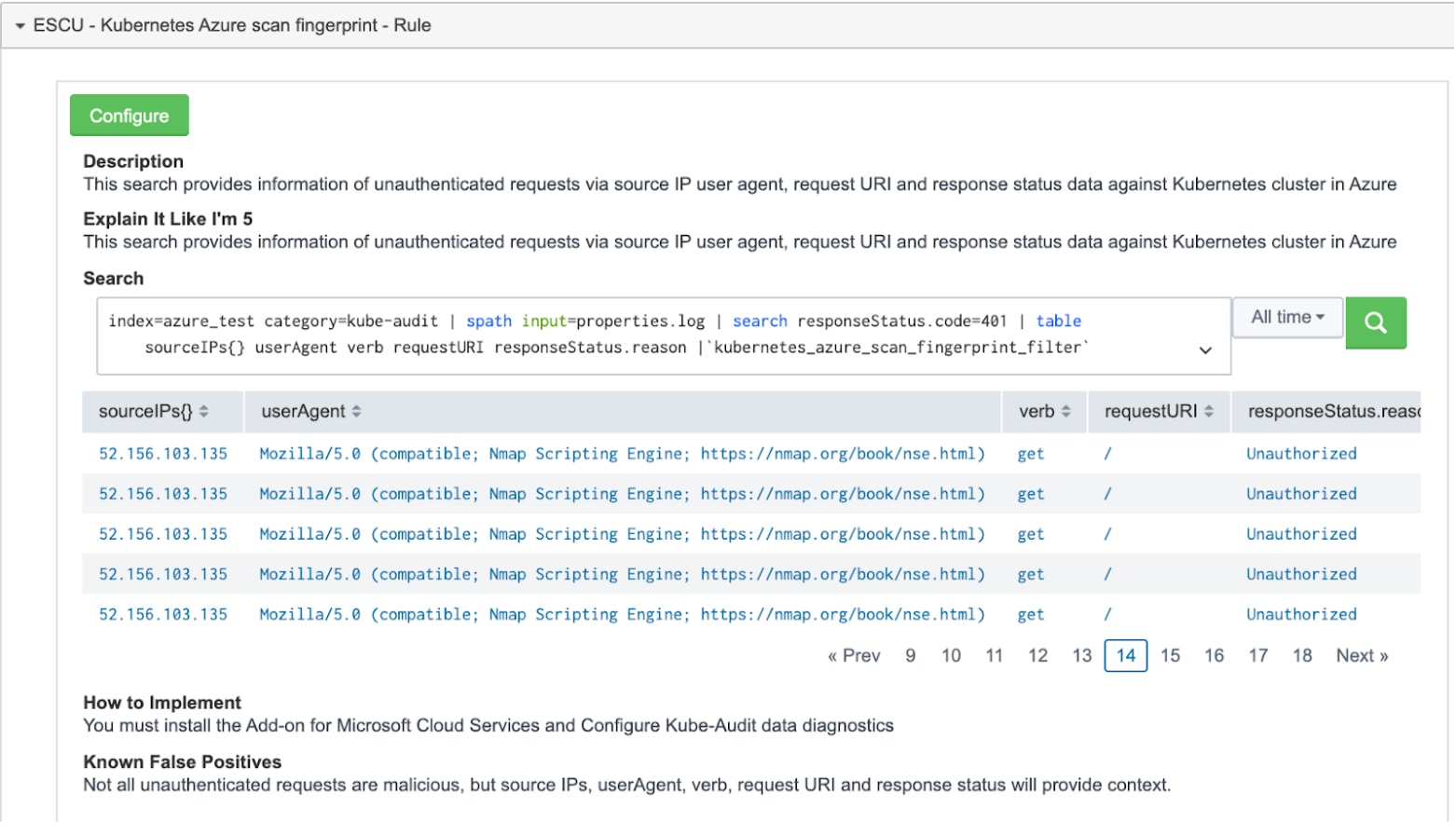 Kubernetes monitoring can be challenging from within and from outside of clusters, this search should give cloud administrators or secops teams a quick way to spot suspicious requests coming from the internet which are forbidden in many cases by default.

We can delve even deeper into details by looking at the Pod level. As we can see in the following detection search result. In this case using similar fields such as source IP address, user agent, http verb, request URI and Pod request information, it can be clearly observed an user agent from scanning tool Nmap and the distinct verbs targeting the POD and with specific request URIs that indicate probing for files or directories. 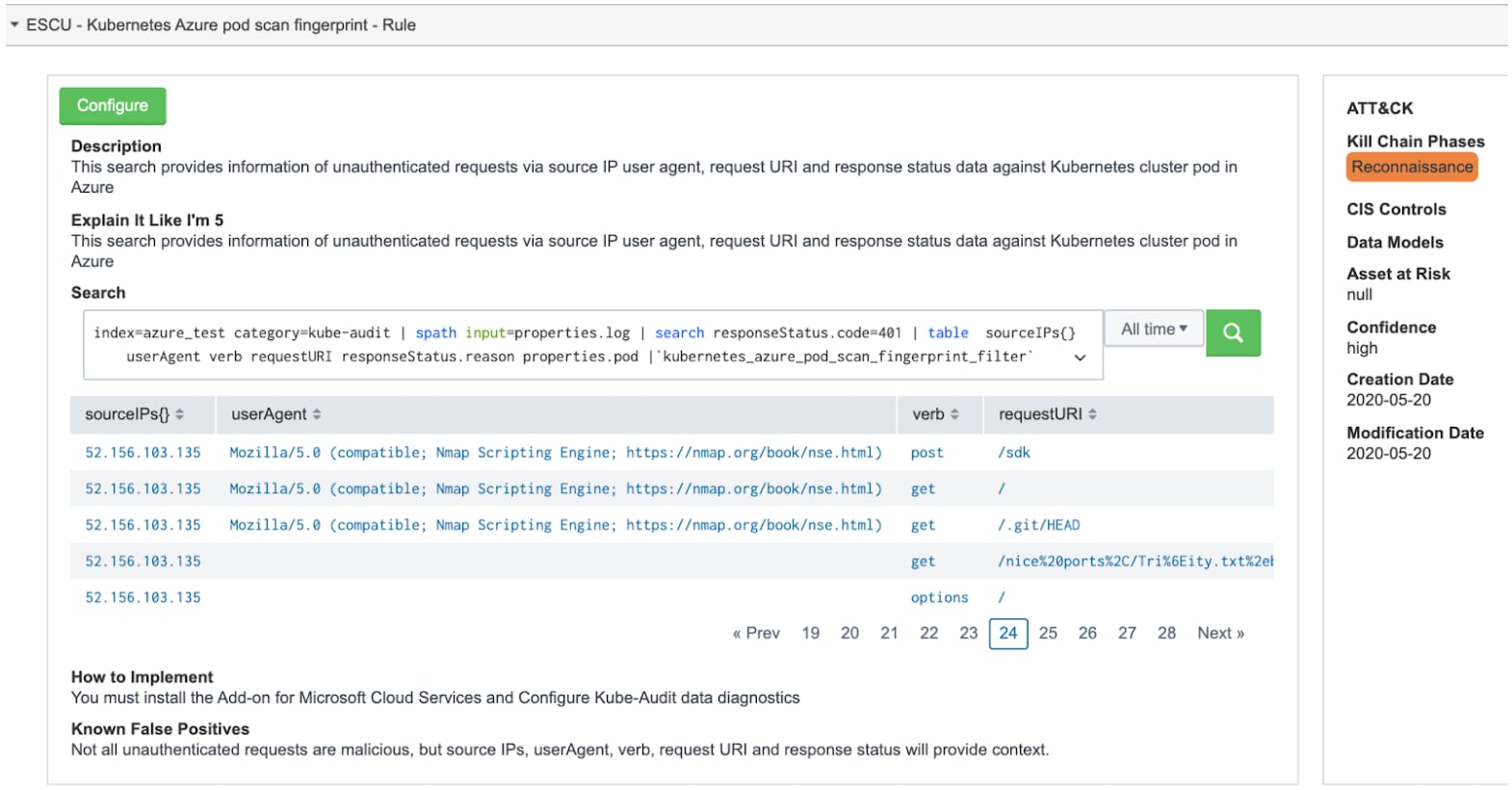 Objects and Roles That Need to be Monitored

In this new release of Azure Kubernetes analytic stories, we have searches that focus on access to internal sensitive objects (Configmaps, Secrets) and Roles with high privileges (Clusterrole, Clusterrolebinding). As outlined in this blog these objects and roles are deemed sensitive because they have either information that can help attackers to compromise the cluster or roles that would allow attackers to escalate privileges. Both new analytic stories are in the context of Kubernetes RBAC, however they are distinctly focused. One is focused on the sensitive objects being accessed and the other is focused on what role is used to access.

While the above search may provide a broad view into sensitive role usage, it is important to understand, that access to such objects must be monitored and the provided search can as well be modified for specific field values such as:

This analytic story is also complemented with two more searches that provide information such as source IP of requesting client, Kubectl calls and accounts with forbidden or failure status.

In the following example we can see a breakdown of source IP addresses with usernames, with different verbs (get, update) with failure status against specific pods. Using the number of these requests, plus their source IPs and statuses we can determine if there are suspicious IP addresses with failed requests to specific Pods. This can be indicative of something that should be investigated further by the analyst monitoring a kubernetes cluster.

This search provides as well a contextual view of role usage against specific pods and namespaces. Namespaces are very important when monitoring Kubernetes clusters as they are used as units of separation and organization of resources. Within this context there are three fields to consider when using this detection search:

About the Splunk Security Research Team

The Security Research Team is devoted to delivering actionable intelligence to Splunk's customers, in an unceasing effort to safeguard them against modern enterprise risks. Composed of elite researchers, engineers, and consultants who have served in both public and private sector organizations, this innovative team of digital defenders monitors emerging cybercrime trends and techniques, then translates them into practical analytics that Splunk users can operationalize within their environments. Download Splunk Enterprise Security Content Update in Splunkbase to learn more.