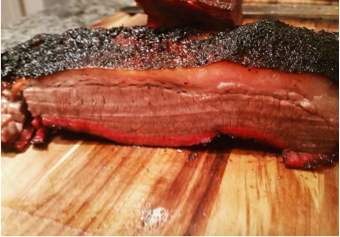 It’s true. You can Splunk just about anything. As someone who is not incredibly technically inclined, understanding the power of Splunk can be difficult to wrap my head around. I find the best way to understand the power of Splunk is to apply it to something you know and love. And with SplunkLive! coming up in some of the best barbecue cities across the US this year, my personal experimentation with Splunk happens to tie-in nicely.

I’ve been happily married to a Texan and University of Texas at Austin graduate for nine years. Aside from being a top-notch husband, he has a passion and knack for cooking Texas-style barbecue and brewing beer. For now, let’s focus on the barbecue.

Technology meet meat. Is there data in your beef? Can barbecue be optimized? Can data tell us if one brisket will be better than another? Can we Splunk an open flame? Why would anyone smoke a fish? So many questions. And there are answers!

The hallmark of Texas-style barbecue is “low and slow.” While there are many variables to ensuring your meat is maximized, including wood used to smoke the meat, the cut of meat, fat content of the meat, and more, maintaining a consistent temperature is the biggest factor in determining if your barbecue will be juicy and delicious or something that tastes like a leather boot.

A true Texas-style barbecue smoker doesn’t have an electronic temperature gauge that regulates the heat and flame to avoid fluctuation. Rather, an open flame and rudimentary adjustments to the air flow to the flame are what controls the heat. In 2016 – and as card carrying technology and data nerds – we thought there had to be at least a better way to understand the temperature of the various chambers in the smoker. Enter the Tappecue. Tappecue is a Wifi thermometer that allows you to monitor the temperature of four different areas of the meat and smoker. Through an app on the phone, you can set alerts when the temperature is too high or too low and adjust your flame accordingly (note the Tappecue does not make any adjustments to the temperature).

So we bought one. At the end of the first session, the Tappecue sent us a .csv file of the data readings from the session.

What else was in that data? How much did the temperature fluctuate? Could we use Splunk and map this against the weather and wind and draw additional insight? Does being in a low-humidity climate like Denver impact the temperature and quality of the barbecue?

I put out the equivalent of the Splunk Ninja Bat Signal and put them on the task. Turns out, they were very willing to lend a hand, especially with the promise of free barbecue and cold beer. Special thanks to @StephenLuedtke for the dashboards and @RyanMoore for the Tappecue à Splunk real-time input! On the menu: beef brisket. Here’s what brisket smoked for over nine hours looks like visualized in Splunk and mapped against the weather of the day via Weather Underground: 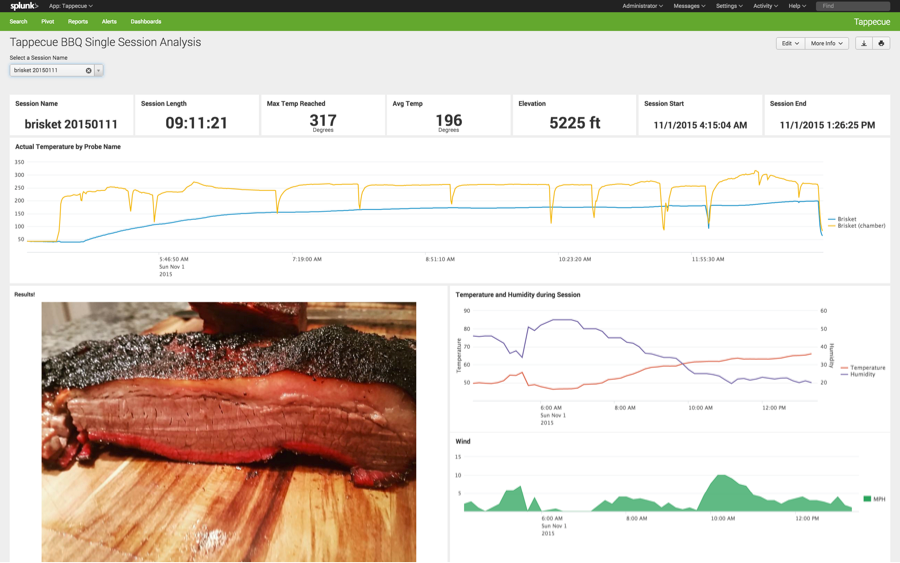 I was able to see when the lid was opened and how the temperature was affected in the chamber and in the meat itself. 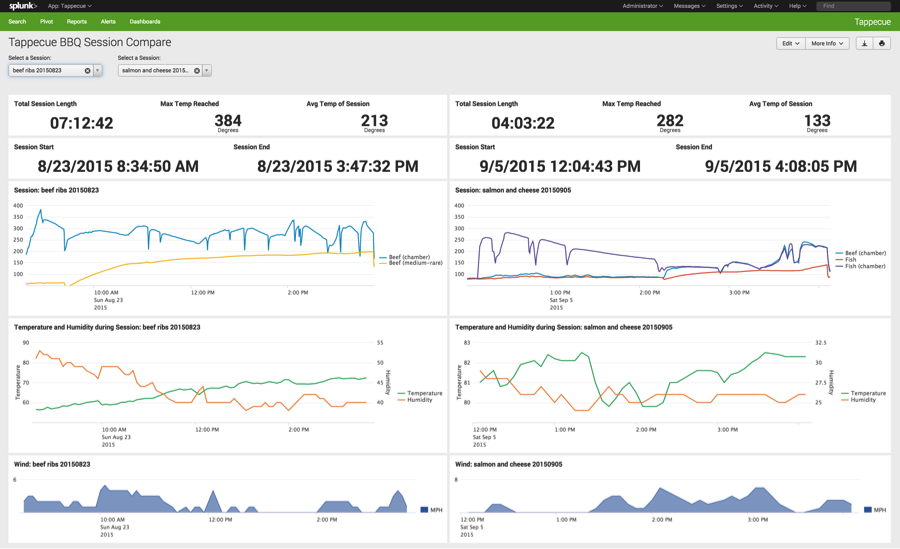 The Tappecue isn’t just limited to a smoker either, @StephenLuedtke decided to give it a go in the oven for some steelhead trout and also a turkey roaster on Thanksgiving. With the trout he even added his own notes through Splunk lookups, a way to enrich your data from other sources. This allowed him to remember extra details about each of his sessions to help compare during next time.

And thanks to @RyanMoore, I can use Tappecue’s API to send data directly to Splunk real-time. I’m thinking about creating an alert that tells my husband to stop opening the lid so much. Being in a dry climate, like Denver, spritzing the meat to keep it moist is essential, but it also causes greater fluctuations in temperature, as well as smoky flavor to escape.

Below is what the live dashboard looks like (when Stephen was roasting a Turkey) updating the temperature every 30 seconds: 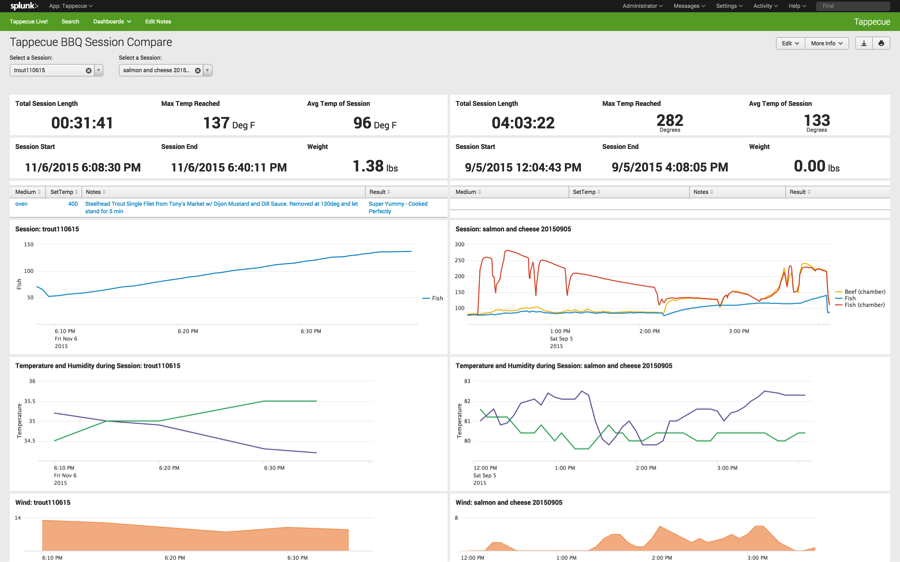 There is still much more investigation that we can do and more data sources to correlate but this is a fun start. Splunk and Tappecue are helping us optimize our barbecue. Imagine what they could do together at scale for the pros, other weekend pit masters and food enthusiasts alike? Better yet, what can Splunk do for you? Try it out yourself by downloading Splunk for free.