“Organizations everywhere are at the center of a data-driven world and Splunk enables success by turning massive data into answers and action,” said Doug Merritt, President and CEO, Splunk. “We are pleased that organizations continue to adopt the Splunk platform on-premises, in the cloud and in a hybrid environment. This continued adoption, flexible deployment and our strong app ecosystem is helping us deliver on our goal of increasing customer success.”

Financial Outlook
The company is providing the following guidance for its fiscal second quarter 2018 (ending July 31, 2017):

The company is updating its previous guidance for its fiscal year 2018 (ending January 31, 2018):

A reconciliation of non-GAAP guidance measures to corresponding GAAP measures is not available on a forward-looking basis without unreasonable effort due to the uncertainty regarding, and the potential variability of, many of these costs and expenses that may be incurred in the future. The company has provided a reconciliation of GAAP to non-GAAP financial measures in the financial statement tables for its fiscal first quarter 2018 non-GAAP results included in this press release.

Safe Harbor Statement
This press release contains forward-looking statements that involve risks and uncertainties, including statements regarding Splunk’s revenue, billings and non-GAAP operating margin targets for the company’s fiscal second quarter and fiscal year 2018 in the paragraphs under “Financial Outlook” above and other statements regarding future growth, strategy, subscription business, cloud adoption, customer demand and penetration, app ecosystem, and expected benefits of new products. There are a significant number of factors that could cause actual results to differ materially from statements made in this press release, including: Splunk’s limited operating history and experience developing and introducing new products, including its cloud offerings; risks associated with Splunk’s rapid growth, particularly outside of the United States; Splunk’s inability to realize value from its significant investments in its business, including product and service innovations; Splunk’s transition to a multi-product software and services business; Splunk’s inability to successfully integrate acquired businesses and technologies; and general market, political, economic, business and competitive market conditions.

Additional information on potential factors that could affect Splunk’s financial results is included in the company’s Annual Report on Form 10-K for the fiscal year ended January 31, 2017, which is on file with the U.S. Securities and Exchange Commission. Splunk does not assume any obligation to update the forward-looking statements provided to reflect events that occur or circumstances that exist after the date on which they were made.

Splunk Inc. (NASDAQ: SPLK) is the market leader in analyzing machine data to deliver Operational Intelligence for security, IT and the business. Splunk® software provides the enterprise machine data fabric that drives digital transformation. More than 13,000 customers in over 110 countries use Splunk solutions in the cloud and on-premises. Join millions of passionate users by trying Splunk software for free: http://www.splunk.com/free-trials.

Splunk, Splunk>, Listen to Your Data, The Engine for Machine Data, Splunk Cloud, Splunk Light and SPL are trademarks and registered trademarks of Splunk Inc. in the United States and other countries. All other brand names, product names, or trademarks belong to their respective owners. © 2017 Splunk Inc. All rights reserved. 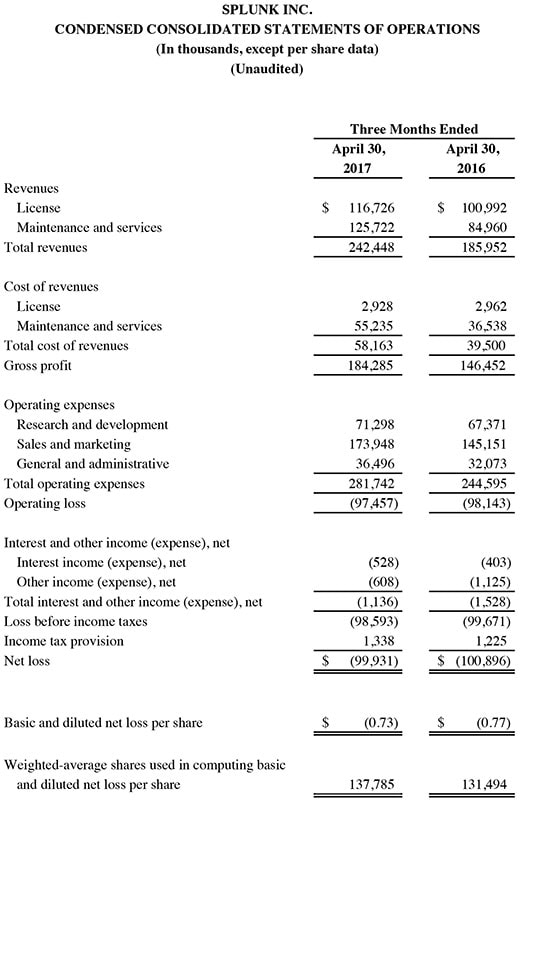 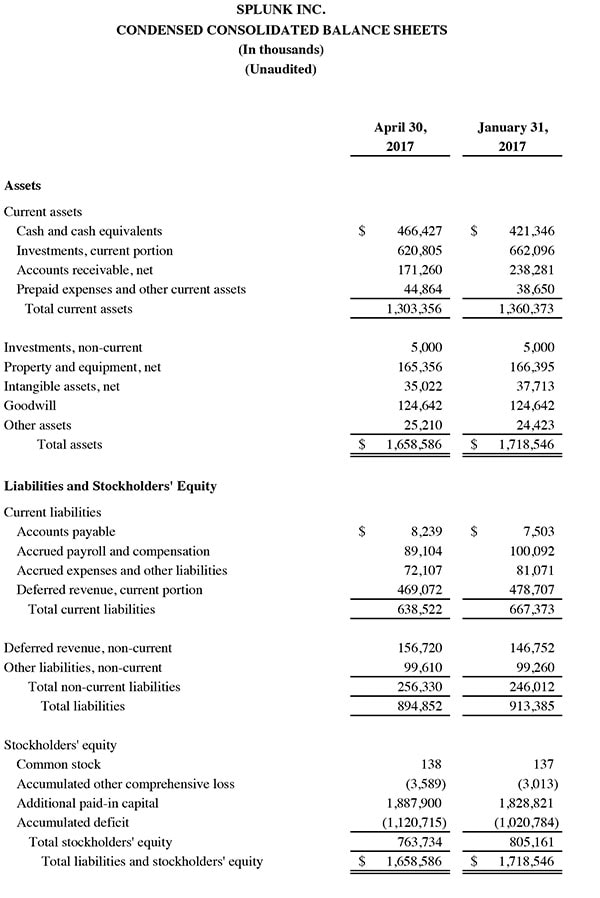 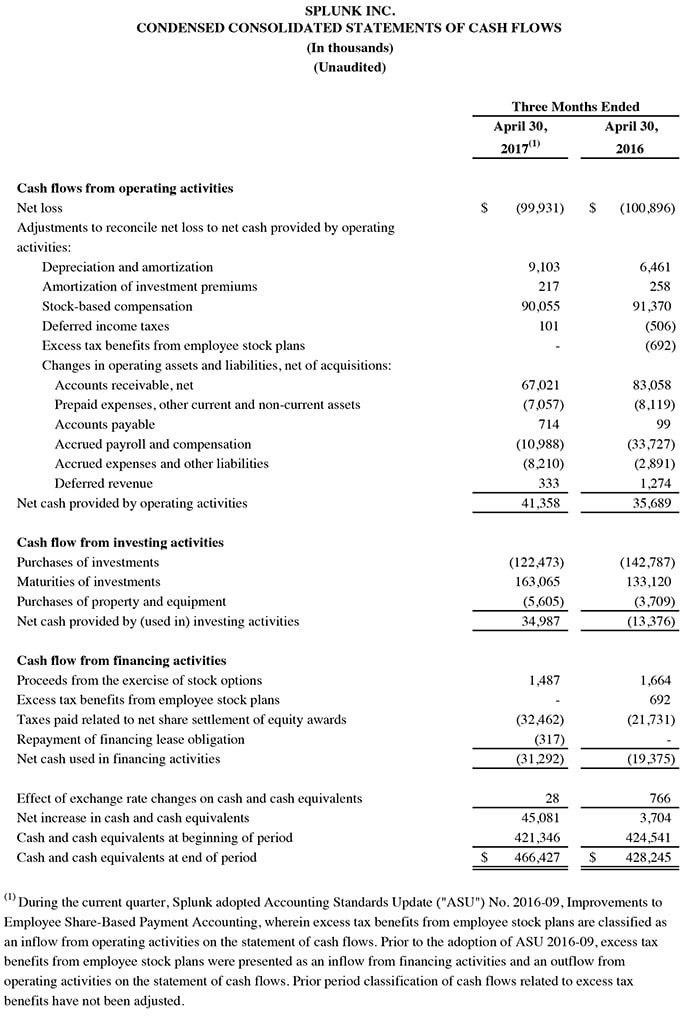 Splunk excludes stock-based compensation expense because it is non-cash in nature and excluding this expense provides meaningful supplemental information regarding Splunk’s operational performance and allows investors the ability to make more meaningful comparisons between Splunk’s operating results and those of other companies. Splunk excludes employer payroll tax expense related to employee stock plans in order for investors to see the full effect that excluding that stock-based compensation expense had on Splunk’s operating results. These expenses are tied to the exercise or vesting of underlying equity awards and the price of Splunk’s common stock at the time of vesting or exercise, which may vary from period to period independent of the operating performance of Splunk’s business. Splunk also excludes amortization of acquired intangible assets and makes adjustments related to a financing lease obligation from its non-GAAP financial measures because these are considered by management to be outside of Splunk’s core operating results. Accordingly, Splunk believes that excluding these expenses provides investors and management with greater visibility to the underlying performance of its business operations, facilitates comparison of its results with other periods and may also facilitate comparison with the results of other companies in its industry. Splunk considers free cash flow to be a liquidity measure that provides useful information to management and investors about the amount of cash generated by the business that can be used for strategic opportunities, including investing in its business, making strategic acquisitions and strengthening its balance sheet. Splunk considers billings to be a useful measure for management and investors because it provides visibility into Splunk’s sales activity for a particular period, which is not necessarily reflected in its revenues given that Splunk recognizes term licenses and subscriptions for cloud services ratably. 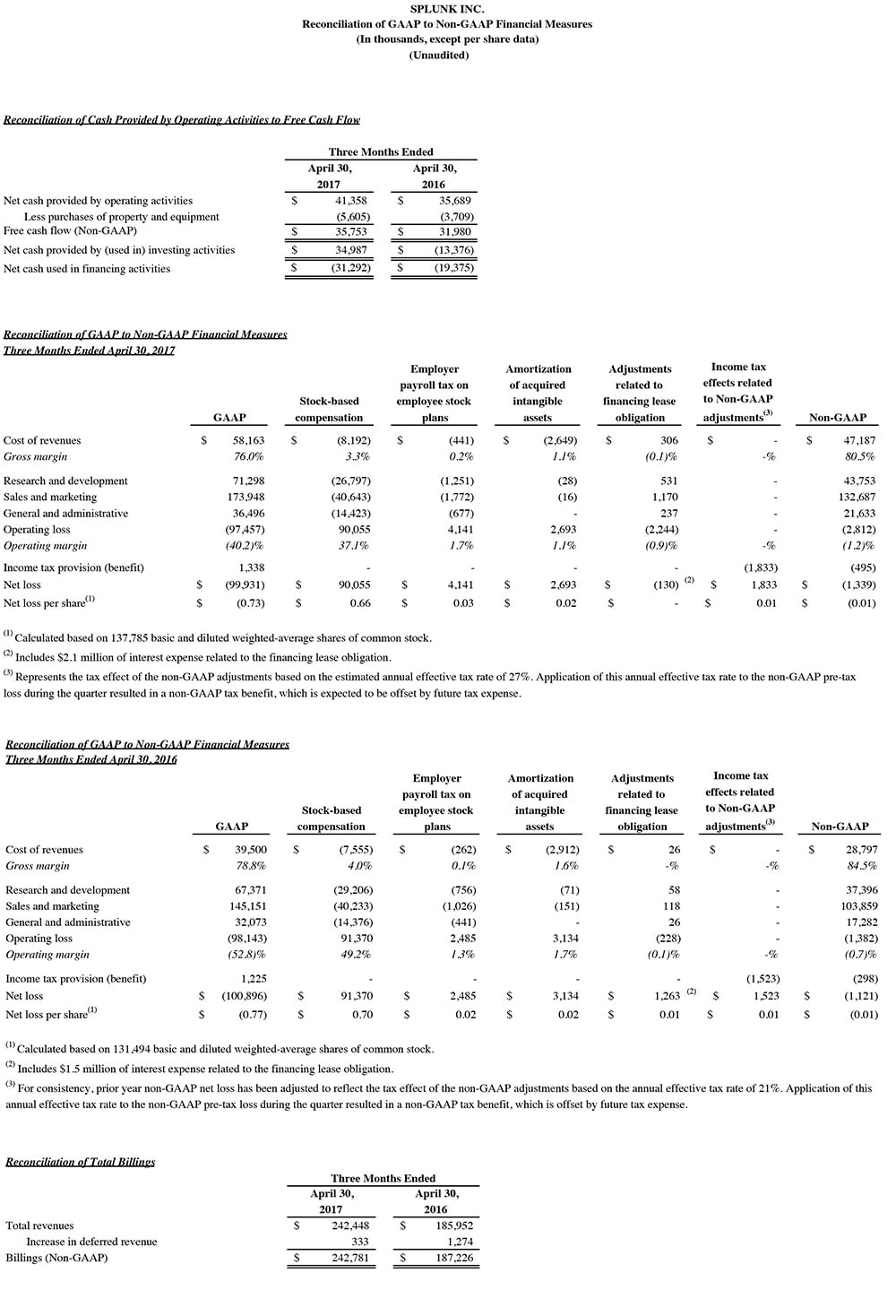