How We Monitor and Run Kafka at Scale

Splunk Infrastructure Monitoring is used to monitor modern infrastructure, consuming metrics from things like AWS, Docker, Elasticsearch, and Kafka, and applying analytics in real time. We’ve relied on Kafka for the core of our infrastructure since the beginning.

Our engineering team has decades of experience with every kind of streaming or messaging platform out there. Kafka’s unique ability to combine high throughput with persistence made it ideal as the pipeline underlying all of Splunk Infrastructure Monitoring. Throughput is critical to the kind of data Splunk Infrastructure Monitoring handles: high-volume, high-resolution streaming times series. And persistence lets us smoothly upgrade components, do performance testing (on replayed data), respond to outages, and fix bugs without losing data.

Splunk Infrastructure Monitoring does on the order of 70+ billion messages per day with:

One huge advantage of Kafka has been the fantastic community that’s built up around the project, from independent developers to all the people at Confluent. We’ve found that for every hurdle we’ve run into, the community has been extremely responsive in either helping us correct some mistaken pattern on our part—or to fix bugs and add roadmap items that address the needs of environments like Splunk Infrastructure Monitoring.

In this post, we’ll go over some lessons learned from monitoring and alerting on Kafka in production, at scale, in a demanding environment with very high performance expectations. 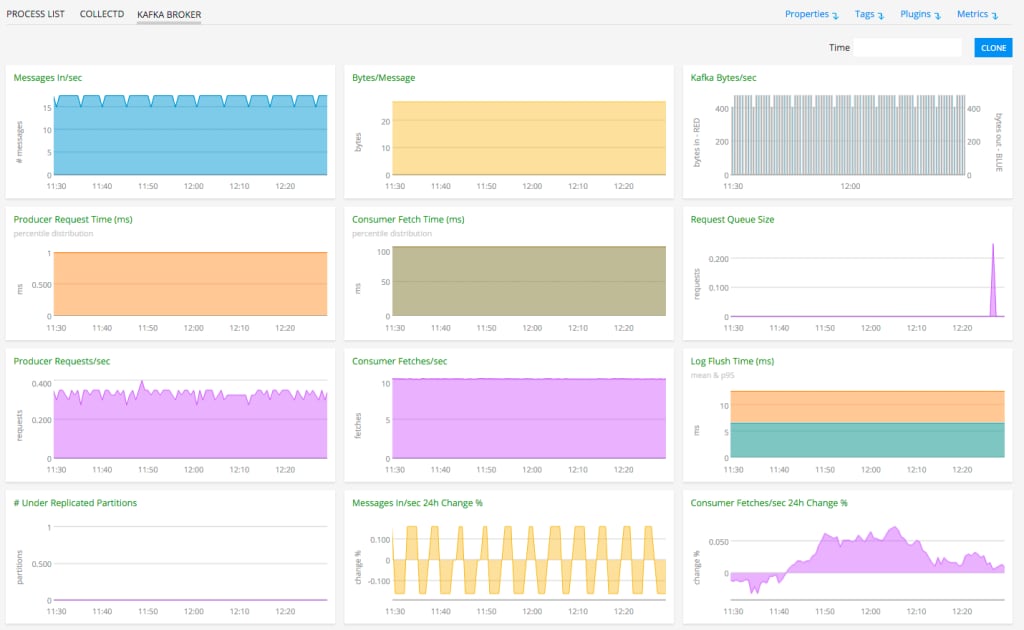 We use a GenericJMX collectd plugin to collect metrics exposed by Kafka via JMX, particularly for brokers and topics. You can also instrument the clients themselves but we haven’t found that necessary (so far). But we do do something interesting there: wrap the client in a layer that’s instrumented so that we know what services in Splunk Infrastructure Monitoring are producing or consuming messages and of what size. This is a relatively standard Kafka pattern: adding additional functionality on top of the client to expose more capabilities.

If you use collectd and the GenericJMX plugin configured for Kafka, Splunk Infrastructure Monitoring provides built-in dashboards displaying the metrics that we’ve found most useful when running Kafka in production. Since topics are set by you when you set up Kafka, for per topic metrics we provide templates where you can insert your topic names.

The most important metrics we track are:

We’ve found log flush latency and under replicated partitions to be the leading indicators that we need to pay attention to what’s going on and prepare to investigate a new bug or regression.

Log flush latency is important, because the longer it takes to flush log to disk, the more the pipeline backs up, the worse our latency and throughput. We monitor for changes in the 95th percentile. When this number goes up, even 10ms going to 20ms, end-to-end latency balloons and all of Splunk Infrastructure Monitoring is affected.

Under-replicated partitions tells us that replication is not going as fast as configured, which adds latency as consumers don’t get the data they need until messages are replicated. It also suggests that we are more vulnerable to losing data if we have a master failure.

Changes in these two metrics generally lead us to dive into the other three metrics.

Messages and bytes in tell us how well balanced our traffic is. if there is a change in their standard deviations, we know that a broker(s) is overloaded. Using messages in / sec and bytes in / sec, we derive bytes / msg.

Bigger messages have a higher cost in performance, because it takes a proportionally longer time to process those messages and can cause the pipeline to back up. A sudden, positive change in the message size could indicate a bubble in the pipeline or a fault in an upstream component. A trend of larger message sizes over time suggests an unintended architectural change or an undesirable side effect of a change to another service causing it to produce larger messages.

There are other metrics important for monitoring Kafka that don’t come from Kafka directly. For example, our messages themselves have timestamps to track approximate latency from producers to consumers. Increases in end-to-end latency between services can indicate a Kafka issue, since it’s usually the largest contributor to inter-service latency for Splunk Infrastructure Monitoring. We look forward to timestamps coming to Kafka messages soon!

Here’s another example of an operational issue we experience early on:

From our experience over the last two years, we’ve found that it’s most useful to notify on alerts for the two leading indicators: Log Flush Latency (95P) and Under Replicated Partitions. And investigation usually leads to something at the broker level. We’ve never really hit a cluster-level issue, which is a testament to how well Kafka’s been designed.

Any under replicated partitions at all constitute a bad thing. So for this we use a simple greater-than-zero threshold against the metric exposed from Kafka.

Log flush latency is a little more complicated. Because some topics are more or less latency sensitive, we set different alert conditions on a per topic basis. Each broker’s metrics have metadata that we apply (as key value pairs of property:value) to identify the topics impacted.

For example: raw customer data being ingested is highly latency sensitive, so it gets a 100ms threshold. 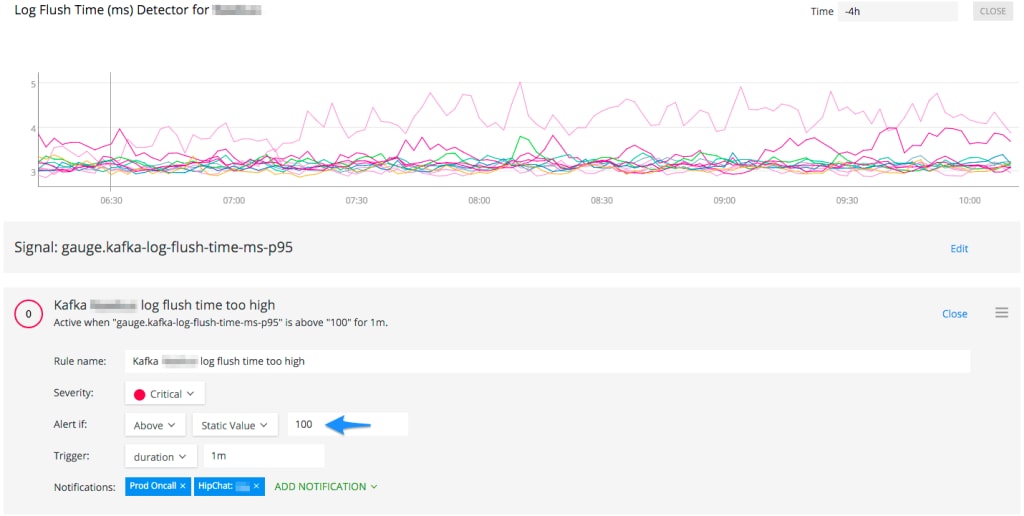 But email can wait plenty of time, so the threshold is orders of magnitude higher. 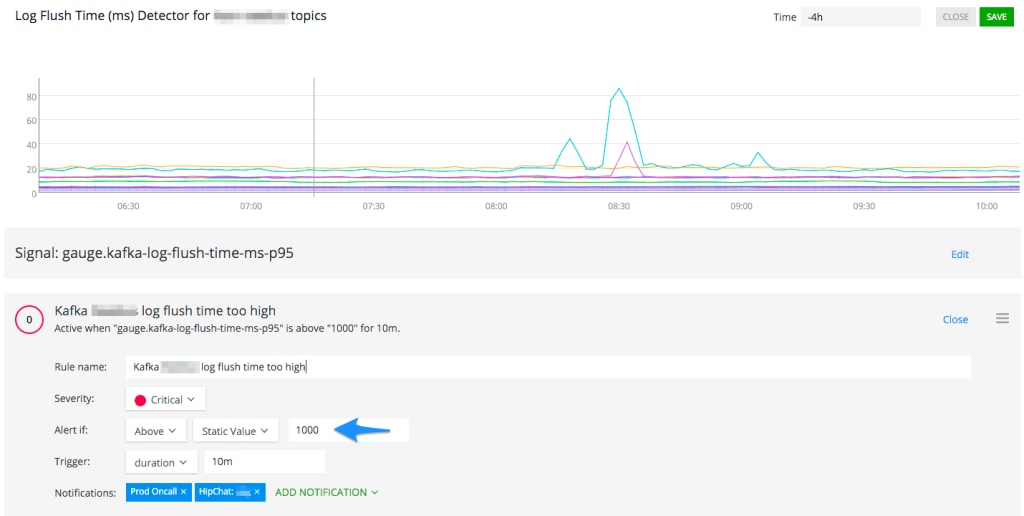 Finally, we also alert on having less active controllers than expected, since this is a clear signal that we have a big problem.

The adding capacity part is easy. But re-balancing topics/partitions across brokers can be quite hard. For smaller or simpler setups, Kafka can generate an assignment plan for you that provides even distribution across brokers. Which is fine if your brokers are homogenous and co-located. This does not work well if your brokers are heterogenous or spread across data centers. So we manually manage the process. Fortunately, Kafka takes care of the actual movement of data, given the partition to broker assignments. And with the expected addition of rack/region awareness, Kafka will soon allow for this kind of spreading of replicas across racks and regions.

This is where the pain comes in. Say you have a lot of traffic on one topic and are adding capacity for it. The topic partitions have to get spread across the new brokers. Although Kafka currently can do quota-based rate limiting for producing and consuming, that’s not a applicable to partition movement.Kafka doesn’t have a concept of rate limiting during partition movement. If we try to migrate many partitions, each with a lot of data, it can easily saturate our network. So trying to go as fast as possible can cause migrations to take a very long time and increase the risk of message loss.

This issue will be obviated soon, as we’re expecting Kafka’s built-in rate-limiting capability to be extended to cover partition data balancing. In the meantime, to reduce migration time and the risks, we end up moving one partition at a time, watching the bytes in/out on the source and target brokers, as well as message loss. We use those metrics to control the pace of rebalancing to minimize message loss and resource starvation, thus minimizing service impact.

Here’s the dashboard we observe, with the network in/out in the charts on the top right. 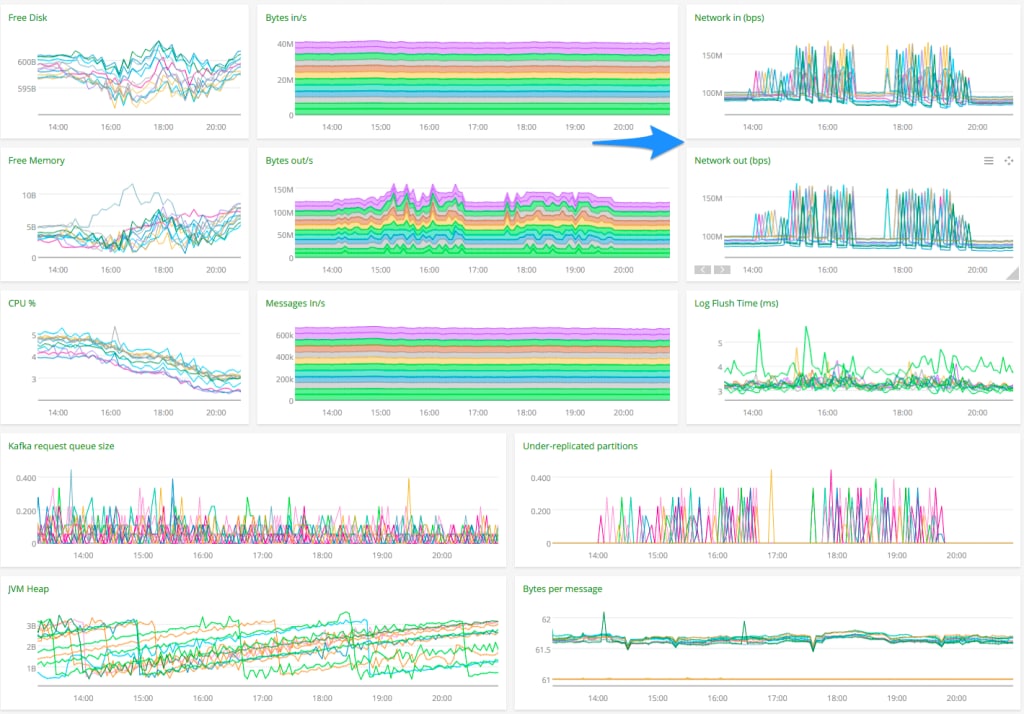 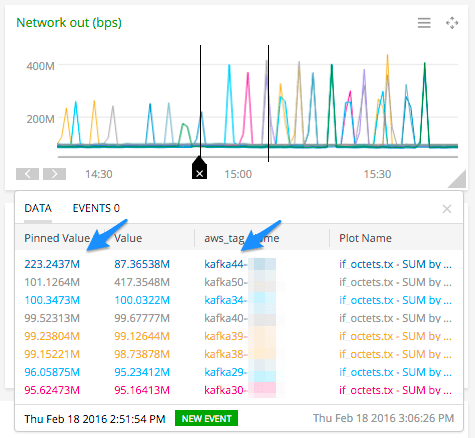 For now, the process is manual. But we’re looking forward to completely automating it in the future, like we’ve begun to do with Elasticsearch. Our approaches to both follow the same general pattern:

Where scaling is hard, dealing with capacity is quite easy. Kafka is quite predictably bound by memory and network, not CPU.

Kafka is awesome. Speed and accuracy, in every way, are critical to Splunk Infrastructure Monitoring and the main things our customers depend on. The throughput performance of Kafka is far superior to all the other messaging or data pipeline platforms we’ve tested for our use case. Combined with the persistence features, this makes Kafka a core part of our infrastructure.

Splunk Infrastructure Monitoring is excited to have joined the Confluent Partner Program and looking forward to providing Kafka users coordinated solutions that meet the needs of the most demanding environments. As Confluent continues to provide increased visibility into the inner workings of Kafka and greater capabilities through the Confluent Platform, Splunk Infrastructure Monitoring will continue to harness that data for deeper monitoring and alerting.

This is a great community to be a part of and we hope everyone who runs Kafka finds this useful. Check out our on-demand webinar about how we run Kafka at more than 70 billion messages per day.

If you’re not already using Splunk Infrastructure Monitoring, get started today with our 14-day free trial.

How We Monitor and Run Kafka at Scale