I Need To Do Some Hunting. Stat!

This is part six of the "Hunting with Splunk: The Basics" series.

If you have spent any time searching in Splunk, you have likely done at least one search using the stats command. I won’t belabor the point, but it's such a crucial capability in the context of threat hunting that it would be crime to not talk about it in this series. 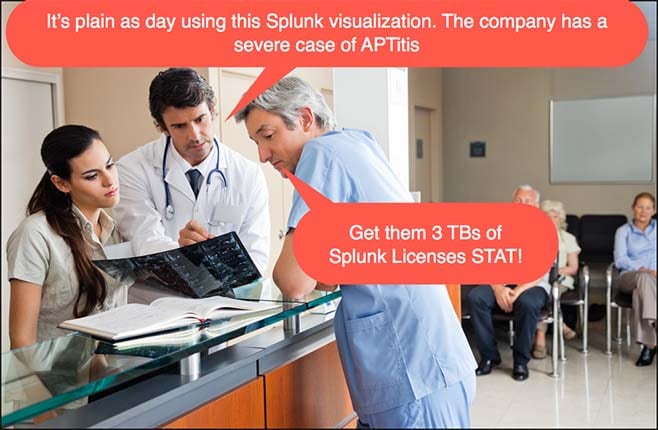 When focusing on data sets of interest, it's very easy to use the stats command to perform calculations on any of the returned field values to derive additional information.  When I say stats, I am not just referring to the stats command; there are two additional commands that are worth mentioning—eventstats and streamstats. Like many Splunk commands, all three are transformational commands, meaning they take a result set and perform functions on the data.

The stats command is a fundamental Splunk command. It will perform any number of statistical functions on a field, which could be as simple as a count or average, or something more advanced like a percentile or standard deviation. Using the keyword by within the stats command can group the statistical calculation based on the field or fields listed.

Here is a good basic example of how to apply the stats command during hunting. I might hypothesize that the source destination pairs with the largest amount of connections starting in a specific netblock are of interest to dig deeper into. 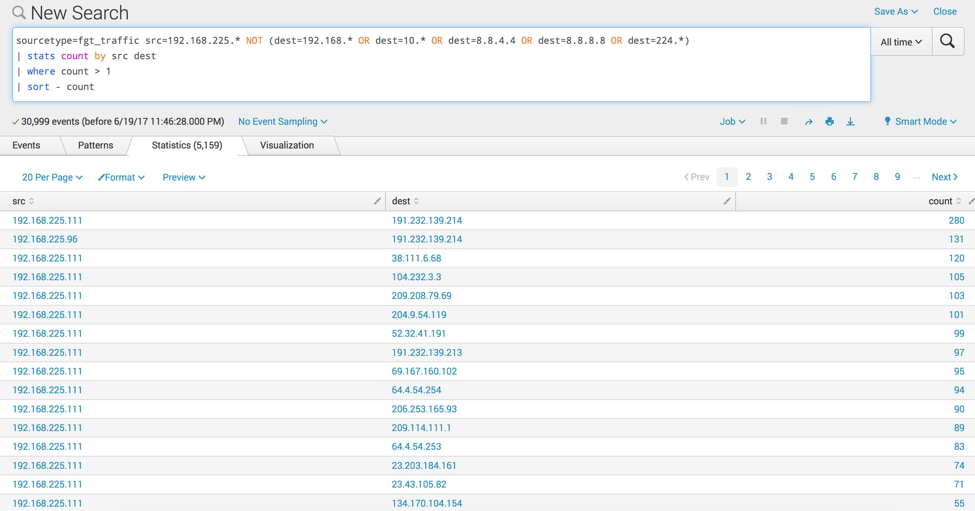 The search is looking at the firewall data originating from the 192.168.225.0/24 netblock and going to destinations that are not internal or DNS. The stats command is generating a count, grouped by source and destination address. Once the count is generated, that output can be manipulated to get rid of single events and then sorted from largest to smallest.

Another use for stats is to sum values together. A hypothesis might be to look at firewall traffic to understand who my top talkers to external hosts are, not from a connection perspective, but from a byte perspective. Using the stats command, multiple fields can be calculated, renamed and grouped. 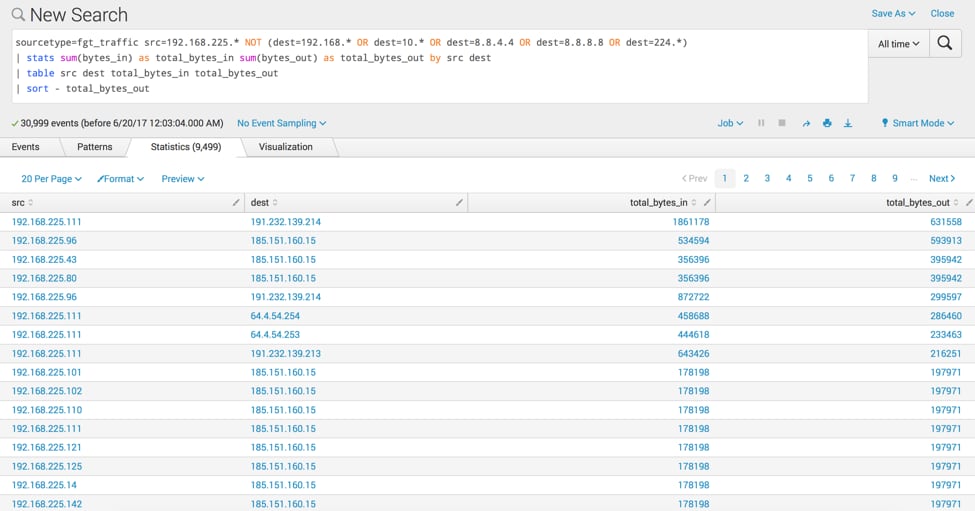 In this example, the same data sets are used but this time, the stats command is used to sum the bytes_in and bytes_out fields. By changing the sort, I can easily pivot to look at the top inbound byte volumes or even the low talkers based on lowest byte count (which might be its own hypothesis). As a side note, if I saw the result set above I might ask why I am seeing many hosts from the same subnet all communicating to the same destination IP, with identical byte counts, both in and out. The point is there are numerous ways to leverage stats.

With these fundamentals in place, let’s apply these concepts to eventstats. I like to think of eventstats as a method to calculate “grand totals” within a result set that can then be used to further manipulate these totals to introspect the data set further.

Another hypothesis I might want to pursue is identifying and investigating the systems with the largest byte counts leaving the network; but to effectively hunt, I want to know all of the external hosts that my system is connecting to and how much data is going to each host.

Using the same basic search criteria as the earlier search, we slightly augmented it to make sure any bytes_out are not zero to keep the result set cleaner. Eventstats is calculating the sum of the bytes_out and renaming it total_bytes_out grouped by source IP address. That output can then be treated as a field value that can be outputted with additional Splunk commands.

The bands highlighted in red show the source IP address with the bytes_out summed to equal the total_bytes_out.

Another hypothesis that I could pursue using eventstats would be to look for systems that have more than 60 percent of their traffic going to a single destination. If a system is talking nearly exclusively to a single external host, that might be cause for concern or at least an opportunity to investigate further. 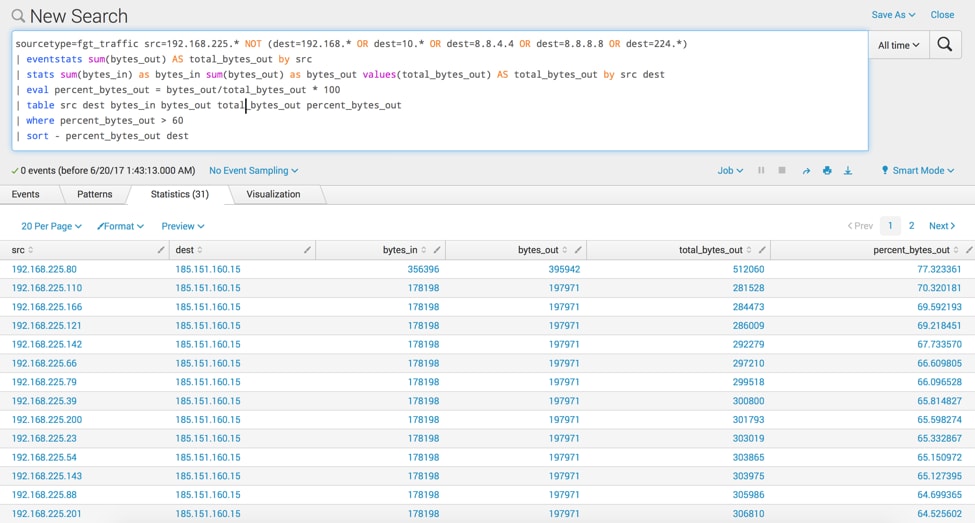 Building on the previous search criteria, I calculate the eventstats by summing the bytes_out grouped by source IP address to get that “grand total.” Now I can start transforming that data using stats like I did earlier and grouping by source and destination IP. If I stopped there, I would have the sum of the bytes_in, bytes_out, the total_bytes_out and the source and destination IP. That’s great, but I need to filter down on the outliers that I'm hypothesizing about.

Using the eval command, the bytes_out and total_bytes_out can be used to calculate a percentage of the overall traffic. At that point, I'm formatting the data using the table command and then filtering down on the percentages that are greater than 60 and sorting the output.

I now have a set of source IP addresses that I can continue to interrogate with the knowledge that a high percentage of the data is going to a single destination. In fact, when I look at my output, I find an interesting outcome which is that my top 14 source addresses are all communicating to the same external IP address. That alone might be something interesting to dig further on, or it might be a destination that should be whitelisted using a lookup. This approach though allows me to further refine my search and reinforce or disprove my hypothesis.

On to streamstats. Streamstats builds upon the basics of the stats command but it provides a way for statistics to be generated as each event is seen. This can be very useful for things like running totals or looking for averages as data is coming into the result set.

If I were to take the results from our earlier hunt, I could further hypothesize that communications outbound from my host occur in bursts. I could then use streamstats to visualize and confirm that hypothesis. 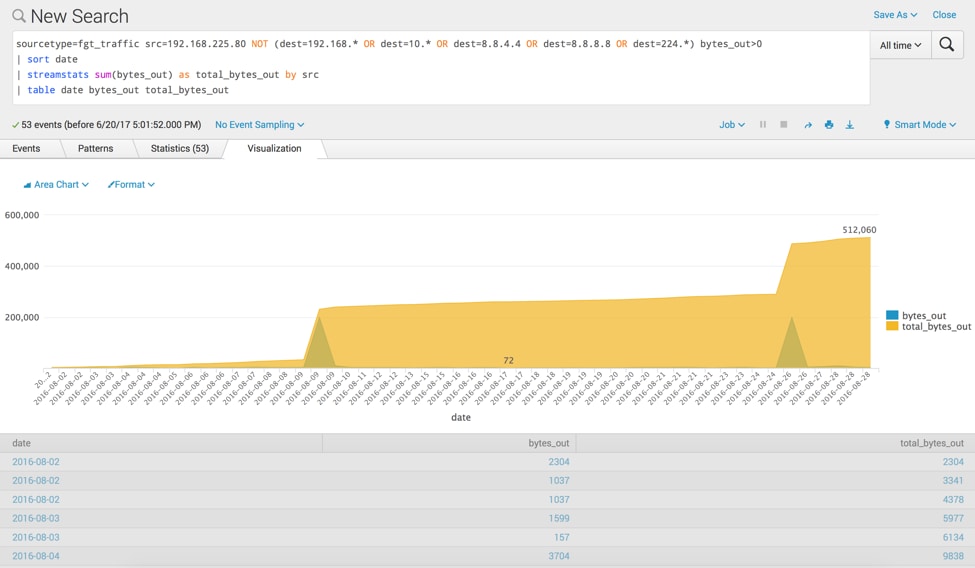 Building off the previous example, the source IP address 192.168.225.80 generated 77% of its traffic to a specific destination. We could investigate further and look at the data volume over time originating from that address.

The search I start with is the same basic search as the other examples with one exception—the source is no longer a range but a specific address. Because I would like the information to aggregate on a daily basis, I'm sorting by date. Streamstats is then used to get the sum of the bytes_out, renamed as total_bytes_out and grouped by source IP address. Finally, we table the output, specifically date, bytes_out and the total_bytes_out.

Stats, eventstats and streamstats are all very powerful tools to further refine the result set to identify outliers within the environment. While this blog focused on network traffic and used sums and counts, there is no reason not to use it for host-based analysis as well as leveraging statistics like standard deviations, medians and percentiles.