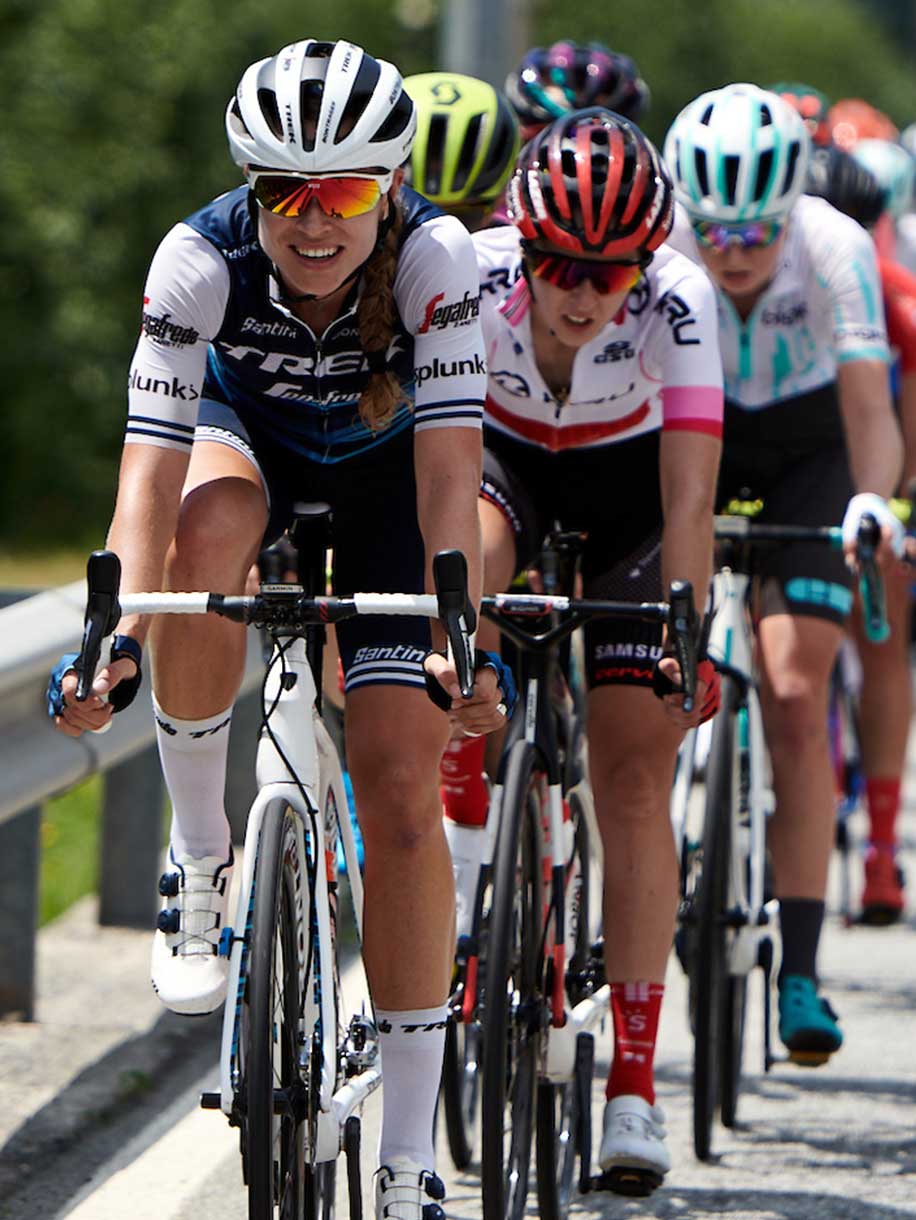 Taylor Wiles leads a pack of riders during Stage 5 of the 2019 Giro Rosa.
Credit: Velofocus

Renowned for its diverse and consistently challenging stages, the 10-day Giro Rosa is not for the faint of heart — and the 2019 race, held July 5-14, was no exception. In its 30th year, the 2019 Giro Rosa course entailed two summit finishes, an uphill time trial, a team time trial, and a final cobbled climb over the 10-stage course in Northern Italy that began in Cassano Spinola and ended in Udine.

The Trek-Segafredo women rode well against a field of about 120 elite cyclists. In particular, rider Elisa Longo Borghini pulled hard for the team, taking third in both the Stage 6 and Stage 7 races, while also receiving the blue jersey as the winner of the Best Italian competition. And riders Ruth Winder and Tayler Wiles also made strong showings, especially on some of the race’s toughest climbs.
And new this year, Trek and Voxwomen teamed up to broadcast a full-hour summary every day of the race to viewers around the world.
Highlights for the Trek-Segafredo women’s team during the 2019 Giro Rosa:
Stage 1: Right out the gate, Trek-Segafredo riders faced sweltering heat and two challenging climbs throughout the 18.8 km course. Despite the day’s numerous setbacks, Longo Borghini pulled off a sixth-place finish in the opening team time trial.
Stage 3: Trek rider Tayler Wiles added to the day’s excitement at the end of the 104-kilometer course with an aggressive attack during the last 20 kilometers. While she gained a minute’s lead at one point, the long, five-kilometer uphill climb at the end of the course slowed her momentum enough to be overtaken in the last 1,800 meters. Riders Longo Borghini and Ruth Winder were also positioned well but unable to sustain their pace. Winder ended as the highest Stage 3 finisher for Trek-Segafredo, crossing the line in 21st place, followed by Longo Borghini, who arrived in 29th.
Stage 5: Longo Borghini rode a strong race during Stage 5, with a 9th-place finish that moved her into 7th place overall at the Giro Rosa. While the course’s long incline and stiff competition tested her limits, her ability to stay focused and keep pace with the best climbers until the end boosted her up from a previous 17th place position in the general classification, ahead of a 12-kilometer time trial scheduled for Stage 6.
Stage 6: Longo Borghini initially set the fastest time when she crossed the finish line of Stage 6’s 12-kilometer time trial, but the top six general classification riders had yet to arrive, and her victory was short-lived. As expected, last year’s winners, Annemiek van Vleuten and Anna van der Breggen, claimed the top spots, but Longo Borghini’s solid performance placed her third.
Stage 7: The course entailed another uphill finish and once again, Longo Borghini arrived with a small group of riders at the end, then sprinted to take third for the second straight day — a move that edged her closer to a 5th place overall finish. Stage 10: When the riders of Trek-Segafredo began the final stage, the plan was for Longo Borghini to lead-out Ruth Winder for the quick uphill push to the finish line that ended the Giro Rosa’s 120-kilometer course. Easier said than done, though; the two lost each other amid the peloton of 120 other riders and their plan went awry. 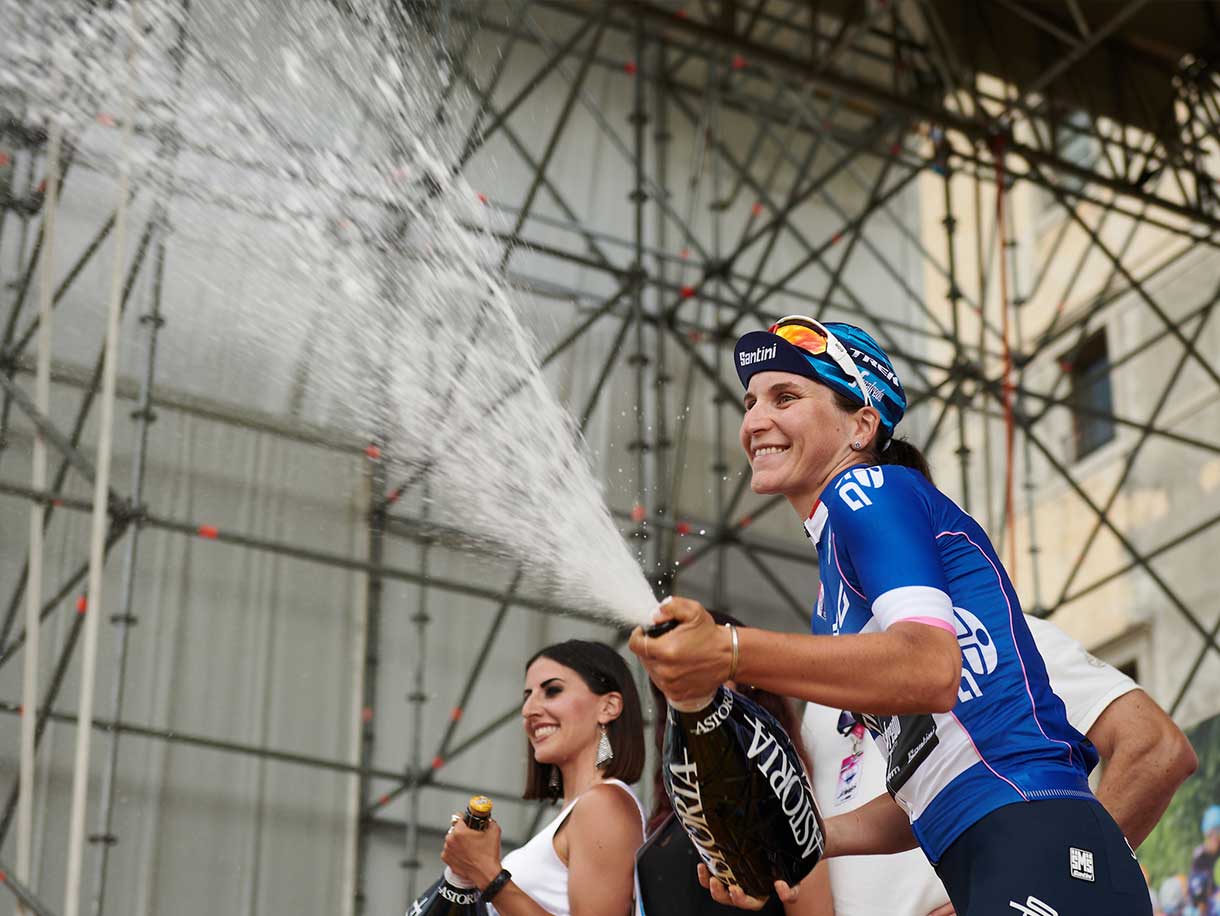 Elisa Longo Borghini, having won the blue jersey, celebrates on the final podium after Stage 10 of the 2019 Giro Rosa.
Credit: Velofocus

Longo Borghini gave it everything she had to place 7th in the final stage with an 8th-place general classification finish overall. She remained Trek-Segafredo’s top finisher, along with that Best Italian blue jersey, which she earned in the first stage of the race and never surrendered.
Looking back over the race, Director Giorgia Bronzi summed it up this way: “I’m happy for how the team raced, I think we missed a bit of luck in a couple of stages, but that is a part of racing... We made a few mistakes in others, and I hope the girls will look back and think about this, and from these we can learn and be better next time. The spirit of the team was really nice, and for my first Giro, I am really happy.”

The Race Behind the Races