The Spring Classics: A Roundup

Europe’s Spring Classics include some of the most prestigious one-day road cycling races on the calendar. While there’s no official definition of which races constitute the Classics — and therefore there’s some disagreement — four of five “monuments,” are universally agreed to be among them. (The four are Milan-San Remo, the Tour of Flanders, Paris-Roubaix and Liège-Bastogne-Liège, with October’s Il Lombardia completing the set.)
The races were tough for both teams, but the women’s team shone following several podium finishes across the season. We also witnessed the lows of Paris-Roubaix and Milan-San Remo for the men’s team as John Degenkolb and Jasper Stuyven struggled. 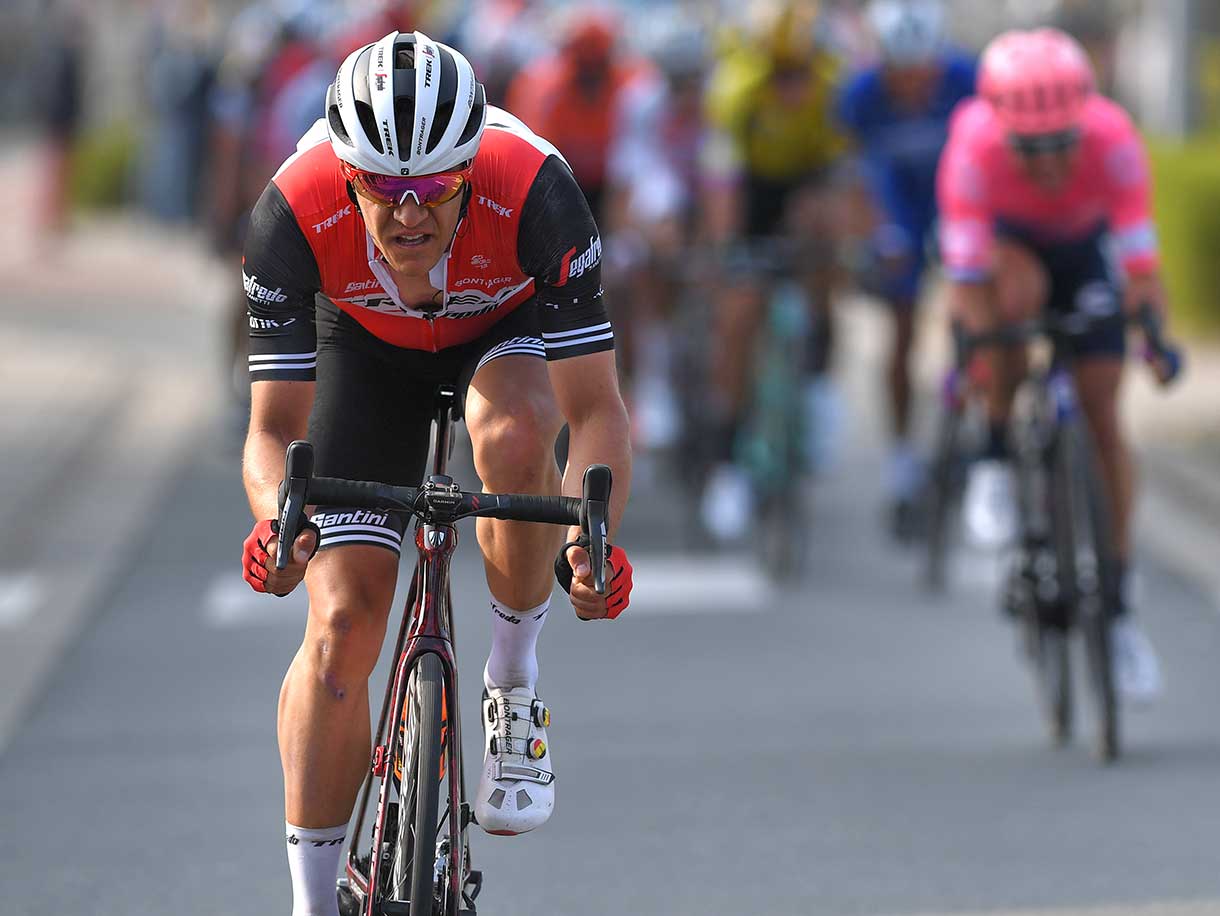 Milan-San Remo
Milan-San Remo did not give the men of Trek-Segafredo the start they’d hoped for. An early dose of bad luck cost John Degenkolb a potential win in the first monument of the year. Degenkolb held a strong race position going into the Poggio climb, but a slipped chain on the descent, with no team car in sight, cost him his chance of victory. 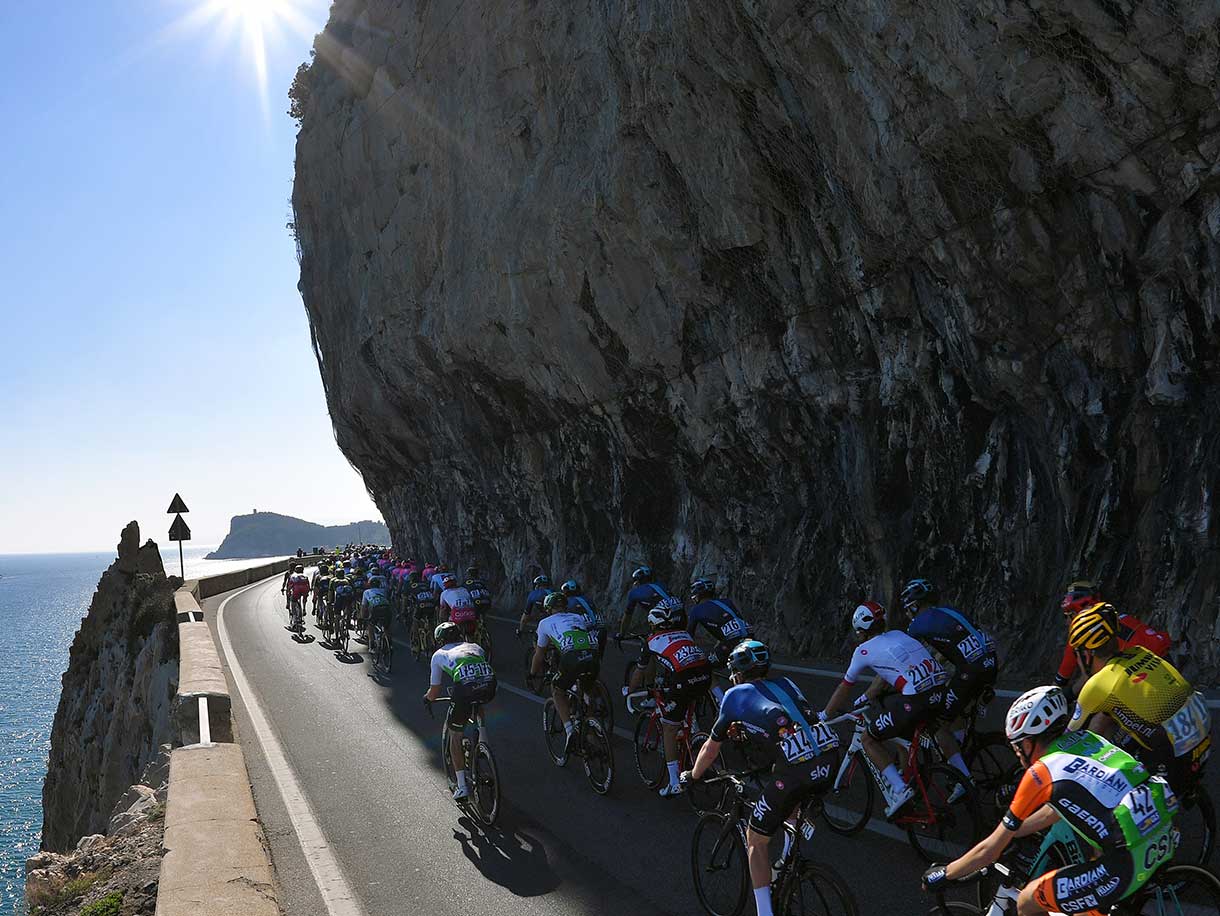 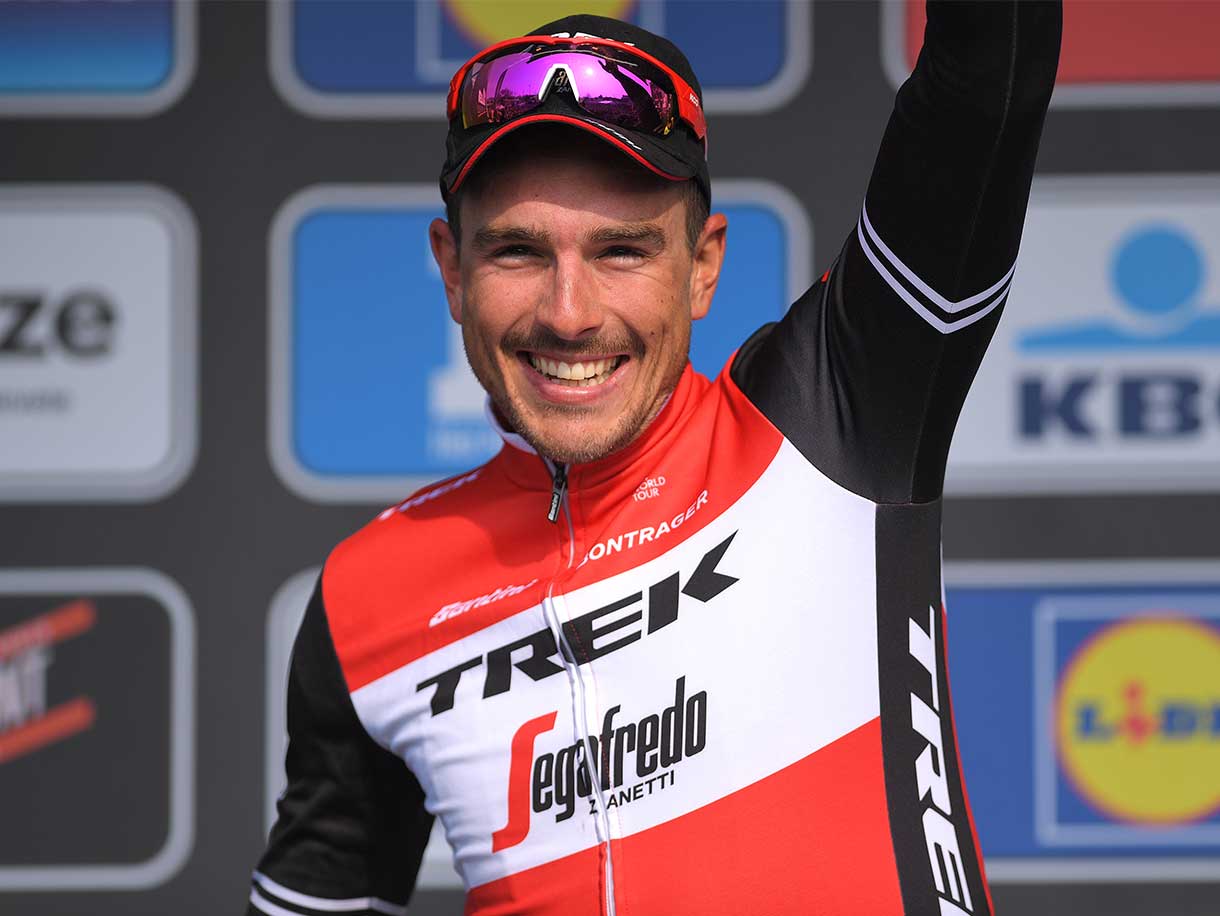 The Trek-Segafredo women’s team found success in Gent, with 19-year-old Italian Letizia Paternoster finishing third. In a true team effort, Ellen van Dijk orchestrated a textbook leadout to the front with Lotta Lepistö and Paternoster on her wheel. With just 1,300 meters to go, the Finnish sprinter gave the final push to help Paternoster take the third-place spot.
Dwars door Vlaanderen
The women’s team didn’t stop in Gent. Ellen van Dijk had found her rhythm in Europe, bringing home an eagerly awaited win at the Dwars Door Vlaanderen (for the second year in a row). Putting her stamp on the midweek warmup to the Tour of Flanders, she made the winning attack from an 11-rider breakaway 16 kilometers from the finish and rode solo to victory. 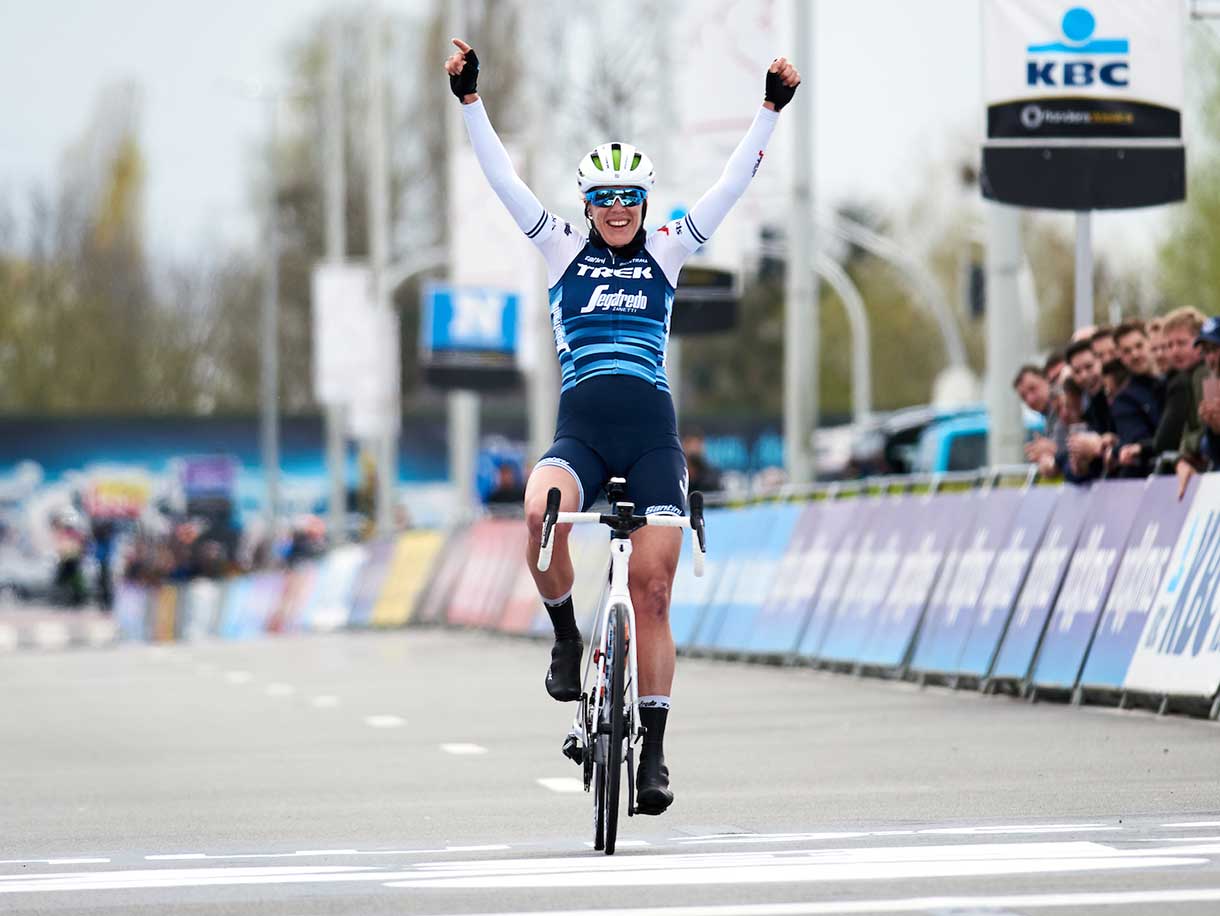 Tour of Flanders
The most prestigious monument classic, the Ronde Van Vlaanderen, or Tour of Flanders, brought disappointment for both men’s and women’s teams, as neither was able to navigate the cobblestone course to earn a podium spot.
Paris-Roubaix
The race more commonly known as Hell of the North — thanks to 29 different, brutal cobblestone stretches that come at the riders like a series of punches — leaves cyclists wounded, with arms that ache for days and unrelenting hand blisters from battling their bikes. The 2019 race was definitely unkind to the Trek-Segafredo riders; John Degenkolb and Jasper Stuyven gave it everything but fell short. Both riders appeared physically and mentally defeated by the “Queen of the Classics,” finishing 28th and 29th, respectively. 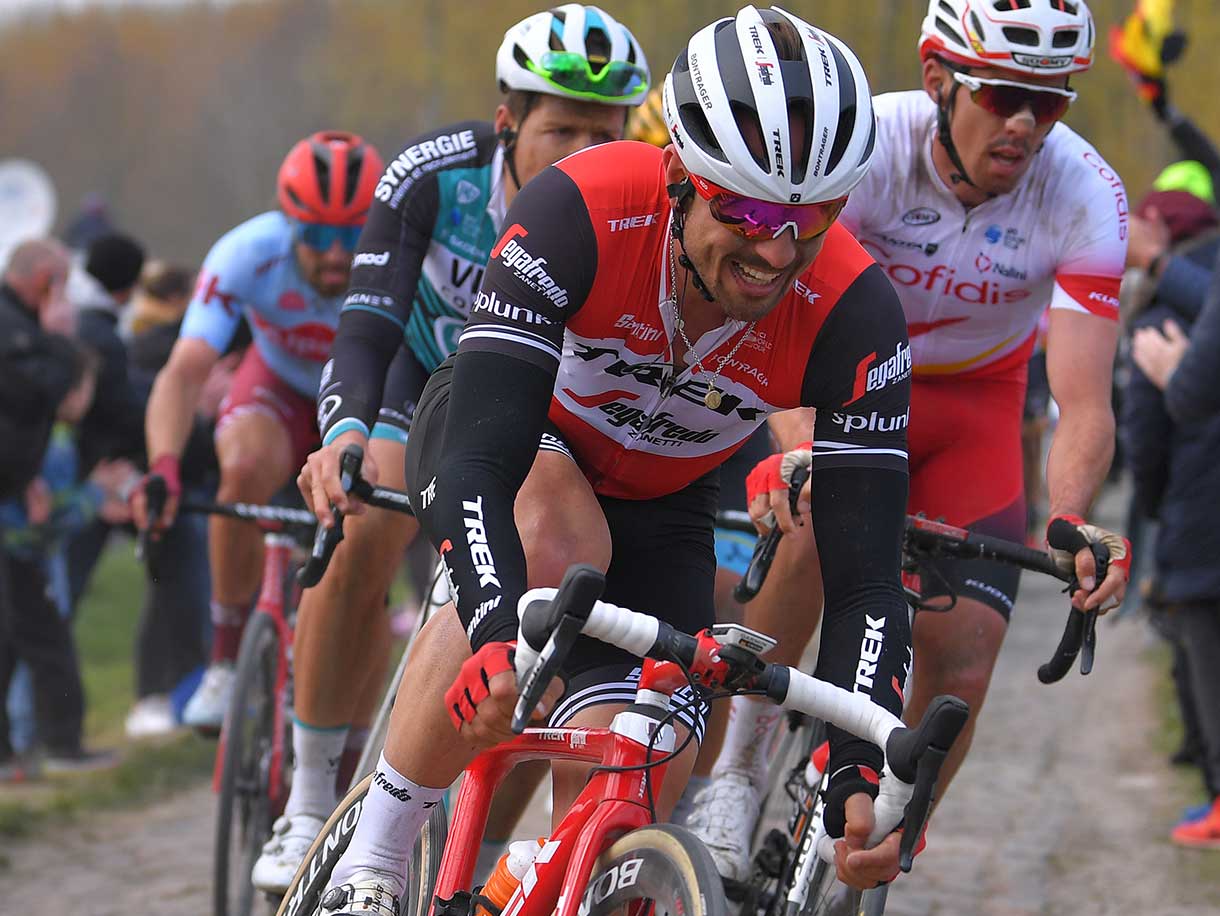 Amstel Gold Race
Amstel Gold Race was always going to be one to remember for Trek-Segafredo, with the eagerly awaited return of Lizzie Deignan. Following her break from racing to have her first child, Lizzie was back in the saddle with the Trek-Segafredo women. Despite donning the World Champion rainbow on her sleeves, Lizzie didn’t find herself on the podium just yet. However, she put together a spirited attack that set the race alight, proving she still has the legs to go the distance ahead of this year’s World Championship in her home town of Yorkshire.
Elisa Longo Borghini was inspired by her teammate’s aggressive return to the road and followed suit with two well-timed attacks to break away from the peloton as cyclists neared the finish. Although she didn’t win a top-three spot, Elisa took the podium for the Most Aggressive Rider award. 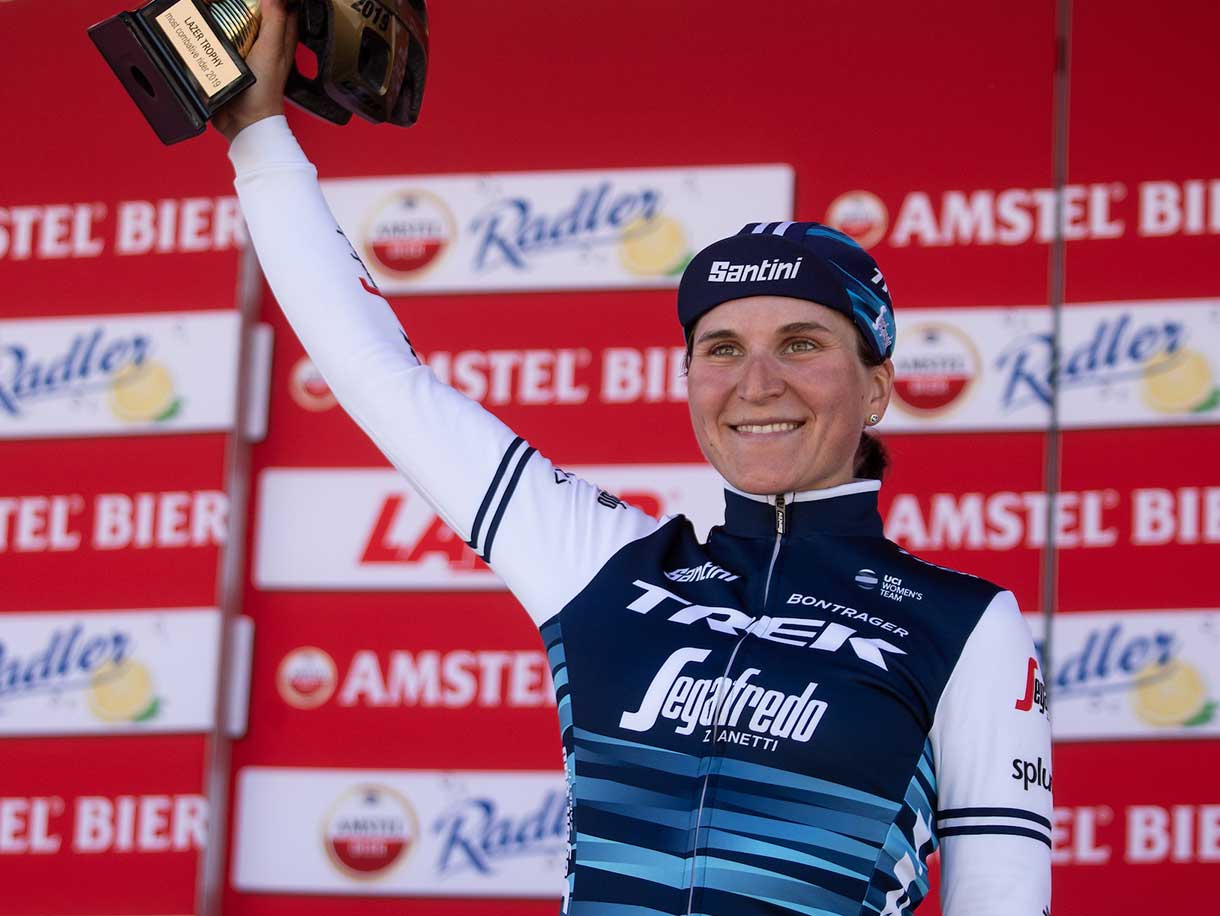 Flèche Wallonne
To round off the end of the Classics season, Bauke Mollema wanted to end on a high in his last race before the Giro d’Italia. After his respectable 12th-place finish at the Amstel Gold race, Mollema proved that he’s is getting close to his top form, ending on the Mur de Huy with a very good sixth-place finish.
Check out our partnership with Trek-Segafredo cycling »
Looking Ahead to Italy’s Great Race

The Giro d’Italia is a beloved race, and one that’s special to several Trek-Segafredo riders. Get the inside story.

We ask the Seattle-area native about his favorite race, must-have gear, and his competitive approach to data.