I was fortunate to be given the opportunity to present to around 300 entrepreneurs, developers, and technologists at the June edition of the Boulder/Denver New Technology (@BDNT) meetup.  The event took place at the University of Colorado at Boulder Law School on Tuesday, June 7th.  It was really great to get to visit Boulder for the first time and speak to a room full of energetic technophiles.

These meetups occur every few weeks, rotating between locations in Boulder and Denver, and are where the “local community gets together to network, socialize and show-and-tell new technology.”

The format of the meeting is well tuned to the modern attention span: a total of 6 presenters, usually representing start-ups seeking funding and feedback, get 5 minutes for their pitch/overview/demo and 5 minutes for Q&A directly afterwards.

I ended up in one of the anchor slots, so I got to watch 4 companies present before me.  They included:

I jumped up to the front for my turn, and I immediately let the audience know that I felt like a ringer.  Splunk is a pretty big company these days, especially when compared to three of the first four presenters.  Taking a show-of-hands poll, maybe 20 people in the audience had previously heard of Splunk.

After reviewing the company history, I tried to present my theme using one metaphor (icebergs at sea representing the big data problem) and avoided some of the more traditional corporate eye chart slides that personally I can’t stand when being presented to.

I posited that old business data paradigms have failed because:

If you are familiar with Splunk, you already know that we help solve all of those problems.  However, the point of my presentation was that these are only the surface problems, and that really the old business data paradigms had failed… 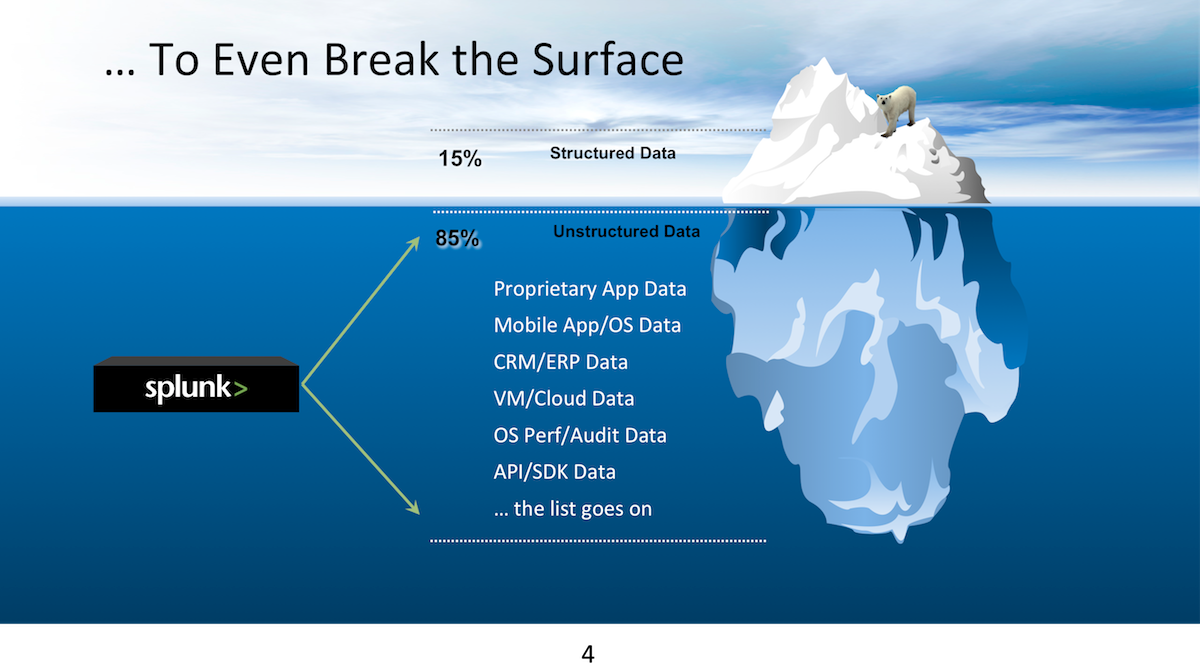 I wrapped it up by mentioning some of the core technologies such as map-reduce that differentiate us, and had around 30 seconds left to show the Splunk Web interface before it was time for Q&A.

There were some excellent questions about Splunk from the audience that I had the opportunity to answer while my colleagues Maureen Boyle and David Millis, who represent Splunk in the region, threw around some Splunk schwag (including the new Splunk eco-totes, one of which I snagged for future grocery runs).

My impressions of the event were as follows:

All that said, I had a great time!  Thanks to Robert Reich (not the Secretary of Labor, but another Robert Reich) and Laura Lee Hullinghorst for having us out to present.  BDNT really has an authentic, diverse, and vibrant community and is a great opportunity to network with folks in the Boulder and Denver markets interested in technology and entrepreneurship.