Just when you thought you were safe from bad pick up lines, another blog post had to come along. This time I will answer the question, “How to map phone numbers to geographic locations?” Using a simple lookup in conjunction with the Splunk amMap or Google App, we will plot telephone numbers on a map. 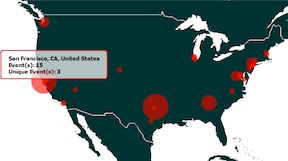 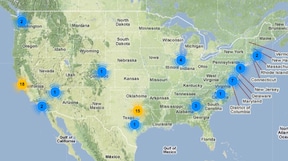 Since their instatement by AT&T and Bell Laboratories over half a century ago, we have come to know and love area codes. Some of us would even consider ourselves area code snobs. For example, as a citizen of Los Angeles, would you answer the phone if a number outside the following area codes appeared on your caller ID?

Maybe not. What was once a mapping system for geography and population density has evolved to encompass even social status.

What does this mean for your IT data? Let’s find out.

I am providing a lookup table with many such entries:

To configure the lookup for any data containing phone numbers:

Sample default.meta (if configuring as an App):

I will work on packaging this as an add-on on SplunkBase.

I was not able to locate the area code-city listing as a free resource on the web. There are several commercial products which are licensed with guarantees on accuracy and regular updates. As the demand for mobile phones, DSL lines and VOIP endpoints will only increase, area codes will split and new ones will be added. I can understand why this data comes as a premium. It is a mess and must be a bear to maintain and update.

The data for this exercise was compiled from a free online listing, so you should expect some holes. These are discussed below. Regardless, the listing provides cities for 163,619 area codes of the 6-digit variety. In addition, I’ve incorporated the basic area code-region mapping for occasions when only the 3-digit area code is desired. For these records, the U.S. cities will have the state in the region field and all other cities will have the country. These records will not contain any data for latitude or longitude.

The city-coordinate listing is available as a free resource. MaxMind World Cities Database to the rescue! This database is updated yearly and contains data for major cities.

With 2 free listings you’d think I could finish up and wash my hands. Not so fast. Somewhere along the way a python script was written to finagle all the data into a single table as I was not able to configure Splunk to use the results from Lookup A as input to Lookup B for the same data source. Transitive lookups are not supported currently.

In any case, there are nuances specific to these files which require conditional logic to sort out, making this transitive lookup infeasible anyway. Tragic? No. Painful? A little. The variations in city names was enough to make me want to eat my atlas. Did I say eat? I meant shred. Here are a few examples of variations between the listings:

And then there were the many personalities of French Canadian cities:

Oh, those Canadians. Gotta love ’em, eh? As you can imagine, all these variations made for some interesting scripting.

While we now have a free combined lookup table, it is not perfect, nor is it complete. The melding of the area code listing and city latitude/longitude listing was not lossless. Over 1% of the cities in the area code listing could not be found in the city-latitude/longitude database (many of these in Canada and Texas). This means events containing area codes without coordinate data will not be graphed. Or you can complete the table with automated/manual queries of free web-based coordinate lookup services. This is an exercise left to the reader.

Also, in this exercise we only used numbers in NANP, the North American Numbering Plan, covering The United States, Canada and the Caribbean. Other regional number plans exist, such as ETNS (European Telephony Numbering Space), but they are not incorporated here.

Finally, several factors dilute the value of this kind of mapping. As you’ve probably already grasped, with the advent of mobile phones, portability laws and VOIP, many telephone numbers have a lower probability of being used in the actual geographic location of its area code. Myself, I will confess to being an area code snob and plead guilty to retaining a 415 San Francisco area code while residing in and conducting Splunk operations from Los Angeles. I’m sure you can think of plenty of other reasons an area code might wander from its geographic mapping. This wanderlust undoubtedly introduces an unknown margin of error to telephone mapping analysis.

So what does Ludacris, rap and maps have in common? Area codes! While this shouldn’t be a surprise, what is intriguing is the depth of insight achievable by analyzing a map of this relationship. Warning: this content is not suitable for those who find gangsta rap uncool. My point is, despite inherent problems and potential inaccuracies, a map is just another lens on your data and may just produce some useful insights. It’s simple to setup and try out (as are many similar lookups and mappings). Let me know what you discover! Just don’t call me from a dubious area code. 😉