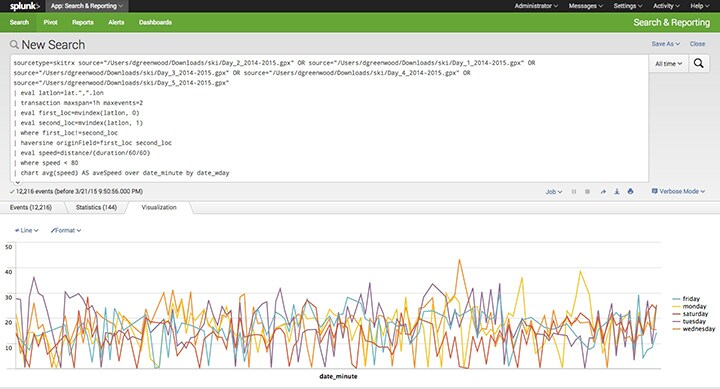 Last month I took some time off and hit the slopes in Jackson Hole, WY.

Yes, it was awesome. And yes, I want to be back there. However things need to be Splunked… starting with the data I collected whilst shredding the mountain.

I used an app called Ski Tracks to collect GPS data, and used Splunk examine it.

You can export all your data from the Ski Tracks app in GPX format with a ~1 second resolution. It looks like this:

Splunk can handle this structure well with the time, lat and lon fields being identified automatically.

The <ele> field can also be extracted easily using the Splunk Field Extractor.

In order to make sense of lat / long fields we need to calculate the distance between two points represented via latitude and longitude.

For example, if we wanted speed we would need to know distance (speed = distance / time).

Steven Maresca has built a SPL command, Haversine, that does just that. You can download it here.

Using Haversine we can now calculate distance. Given the format of the GPX log we can calculate this as follows:

In essence, we’re cheating a bit via transaction to build an aggregate of 2 events. Then, we extract start/end locations from the multivalued field that transaction generates, exclude transactions with start location = end location, and then calculate distance with Haversine. 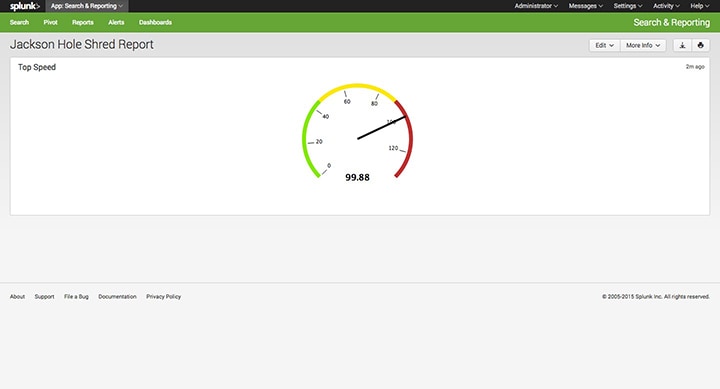 The first thing I wanted know was, obviously, top speed.

In the search above we do a simple speed calculation, and then use stats to find the max value.

Haversine calculates distance by default in Kilometers, hence Kilometers per hour is the output unit.

Keeping with speed, I then wanted to look at speed over time during the week – was I faster on a particular day?

In this search we again calculate speed and use a chart command to overlay each day on a single 24 hour time series graph (with minute granularity) so that we can easily compare them.

In the second post I’m going to look at tackling more searches including:

Finally, I want to say a big thanks to Steven Maresca for his help to create these searches – thanks Steven!