More times than not I have seen corporations struggle with config management and it is key for concise mitigation and remediation plan. Interfacing with a variety of Splunk customers the corporations whom do implement a config management system usually have a different tactic on how to manage Splunk while doing it in a secure fashion. In this series of blog posts which will hopefully walk you through a simple deployment of Ansible all the way to the most complex use-cases I have seen. I will first be covering how Ansible can be leverage to manage a simple Splunk deployment on your own hosts. Part 2 we will cover how this can be done in a larger scale with EC2 utilizing dynamically changing inventory of hosts for deployments whom need to scale in a cloud environment. Finally part 3 will cover how to manage a giant deployment of Splunk with multi-tenecy requirements where there are various “customers” or business units with different Splunk config needs. The idea is to embark the necessary knowledge to not only deploy Splunk but anything else using Ansible as your config management system.

There are a few config management system. The most common ones I have seen deployed are Chef and Puppet. In my previous job we evaluated a few of them, including Puppet and Chef and we ended up choosing Ansible. Here are the reasons why I have seen organizations make that choice:

Ansible is not for organizations whom their large server base is windows. Although they are working on Windows clients.

I suggest you grab Ansible from their stable repo in github instead of your distributions repository. The stable version in github has welcomed updates and additions like ansible-vault which we will cover later in further detail.

Now lets install the playbooks and configuration files we will use for deployment. 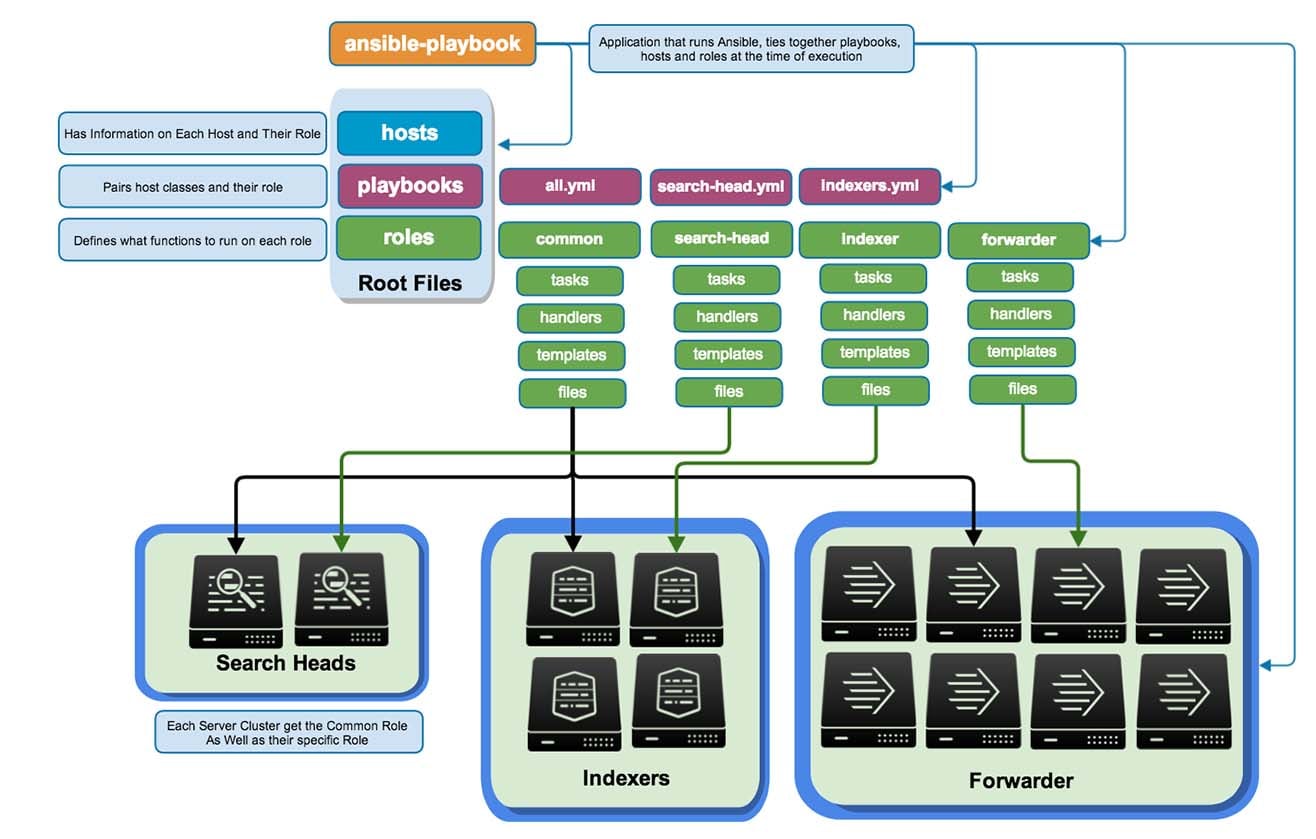 Explanation of what the different pieces are:

Lets walk through the structure of a role in details. I will start with the common role. The common role should be ran no matter what kind of role the host has as it performs common functions that you would want on every host. If we look at the main.yml under tasks for this role we can see all the tasks it performs.

The role contains 5 play books. Lets walk though one of them and what does it do. Looking at apt.yml in detail:

The description of this is at the top as a comment. Using the “apt” Ansible module (follow the link for information on modules) we install a variety of software on the server. The first batch of software is tagged as “configuration” and “security” and the last are just configurations. The first batch install chkrootkit, rkhunter, clamav, fail2ban in the system and the second batch installs a set of configuration utilities (vim,screen, etc..). This is the typical structure of an Ansible play, which coordinates what happens on the host system. Plays are powered by different kind of Ansible modules, the one used above is apt module. You can see a full list of supported modules in Ansible docs.

Running Ansible for the First Time

Make sure that you have hosts defined under hosts
If the host you are running is virgin (nothing has been done to it) you will want to run Ansible with -k so it prompts for the password during the first run. You will only need this once as Ansible has a task under roles common to copy the ssh key of your user to that host.

You should see a similar output to this:

This should have armed you with the basic tools to do config management and orchestration on Splunk hosts as well as the rest of your infrastructure.

I encourage you to walk through each roles task to verify what it is doing. Also the github read me will have more information as to how Splunk is configured using the shipped playbooks. Feel free to drop me a line with any questions or if something is not working at jose at splunk.

Thank you Mike Regan, Mike, Baldwin and the rest of the Splunk Cloud team for your contributions and working with me on the Playbooks.