Its the weekend. Still we Splunk. 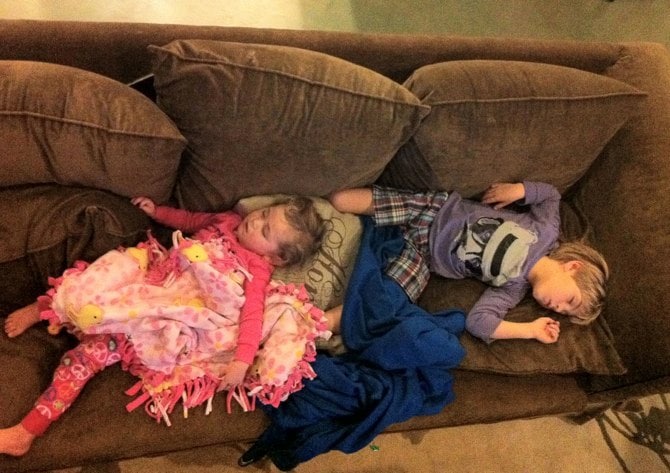 A short while ago, I was just on the couch in my living room, watching the movie “Super 8“. My two kids had fallen asleep next to me. Look at them. So peaceful. Someday ‘ll show them that picture when they’re older and being “not so peaceful”. Back to my story…

Super 8 was…well…kinda “ok”. The movie just ended and being the Apple Fanboy i am, my iPhone was sitting on the arm of my couch. Out of it comes that familiar “ping” sound when a new email comes in. As i am now programmed, I reach for my phone, grab it, flip it over, push the “Home Button”, do the whole “Slide to Unlock” thing and check my email.

Its an email from Lye-Hee Tan. He’s one of our pre-sales teammates in Singapore–14 hours ahead of me. It must be Sunday, late morning. Lye-Hee asked a question on our sales engineering email list as often people commonly do. His question, if you’re interested, is around the maximum number of lines that splunk allows without line breaking in a single event, if there were defaults, and how to change them.

That my friends isn’t the cool part about this story. What’s cool is Splunk. But its not the software the shines this time, its the people. Its not so much one person, but its this cloth we Splunkers are cut from. Splunk (the company) is like one giant nerd quilt. We all have a common mission, a common goal, and common behaviors. When one part of the nerd quilt needs help, someone on the other end is right there for ya. I’m impressed daily.

I read Lye-Hee’s email. My thought was.. “oh.. this is easy.. I know the answer to this question–I’ll just quickly look on my Splunk instance on my laptop, get the info, send him an email back.”   I started feverishly tapping on my iPhone as I was having DNS issues on my main computer. While I was crafting my answer I heard a “new email ping”. I kept typing, almost finished—“ping”. Another new email. I clicked send.  The familiar “whoosh” sound is heard, and my mail heads for Lye-Hee’s inbox. I looked back at my iPhone screen and to my surprise, two other Splunkers had sent email two and three minutes prior–while I was gathering my thoughts and typing.

Look at this screen shot from my iPhone. 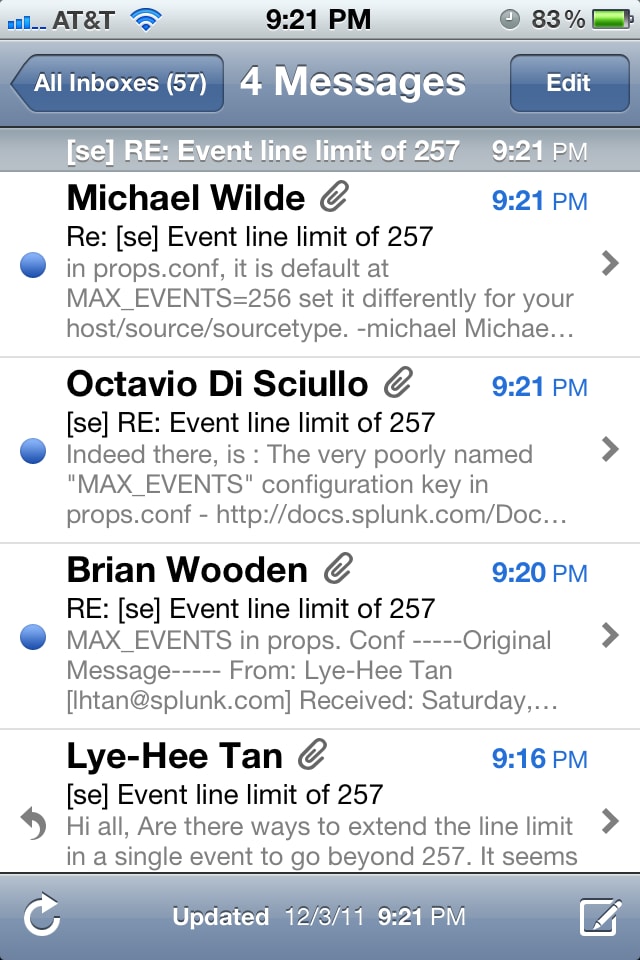 Need I remind you that its Saturday night. For some of us like Octavio DiSciullo (major epic support engineer) it was after 7pm. Who knows what he was doing? I’d like to think he was out “drinkin’ with the boys” but I suspect he was at home, perhaps changing a diaper. Then you have Professional Services engineer, Brian Wooden. Heck knows what he was up to. After all he’s in Kentucky–one hour ahead of me. Multiplayer Battlefield 3 on Xbox? It wouldn’t surprise me.

Within a few minutes on a weekend, where I like to imagine Lye-Hee might have been having a sunday morning champagne brunch with his family, he sends and email to us Splunkers. We respond in force within minutes–not 30 minutes–FOUR MINUTES.

Its a true pleasure working amongst a team of friends–as thats what we are here. Friends that work together, play together, and even interrupt their weekends to help each other.

I’m the Splunk Ninja–but my day job is team leader for North American (Inside Sales) Sales Engineering group. Come work with me. I’m recruiting and hiring–friends.

I’ll be waiting for that “new mail ping” sound when you email your resume to “ninja@splunk.com“.  After all, my iPhone is always near by.