Doctor Who and The TARDIS (Timelord And Related Data In Splunk)

So Doctor Who is back, and is a woman, (does that make her the original Woman in Technology or perhaps Woman in Time?) The female regeneration lead both of my daughters to watch the new Doctor Who, hooked by Jodie Whittaker solving problems with technology, brains, wit and probably very good data analytics from her sonic screwdriver. For those of you that don’t know the show, Doctor Who is the longest running TV series on the BBC and following an alien - who looks a lot like a series of English actors - adventuring through space and time. Every couple of years “The Doctor” regenerates into a new body (hence the change of actor) and for the first time, The Doctor is a woman. Prompted by questions from my newly-enrolled-into-the-fandom daughters, I wondered if there was a dataset about The Doctor’s adventures that I could Splunk.

Thanks to The Guardian website I found some Doctor Who data covering every episode up to 2011. At this point, I’d like to point out that Doctor Who and Splunk have a few connections. Firstly, Splunk’s London office has a TARDIS. The TARDIS (Time And Relative Dimension In Space) is the doctor’s time/space ship that takes him/her on most adventures, in the form of an old fashioned, blue police box. Sadly, the TARDIS in our London office is just a meeting room (we’ve cracked data and machine learning– we’re still working on time/space travel thing).

Secondly, like The Doctor, Splunk is pretty good at dealing with time (well, time series data analytics), so I built a Doctor Who dashboard titled “TARDIS” (Timelord And Related Data In Splunk) to work out the furthest that The Doctor has travelled in time. To do so, I started with the maximum and minimum date values: 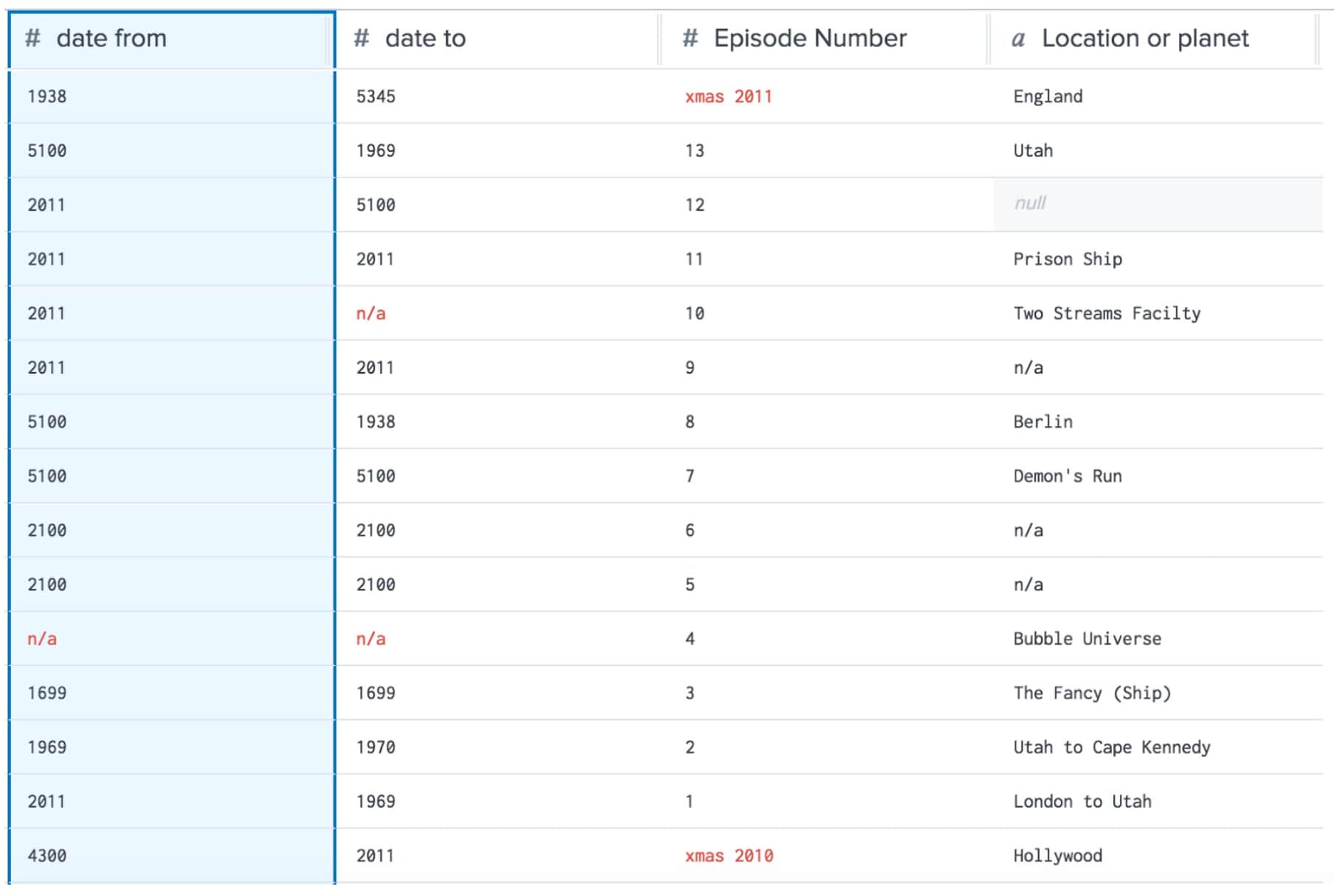 Next, I wanted to dig into The Doctor’s space travel, and find out where they had been most. London was the clear winner, but it was interesting to see locations as diverse as Paris, Atlantis and the planet Krop Tor feature. 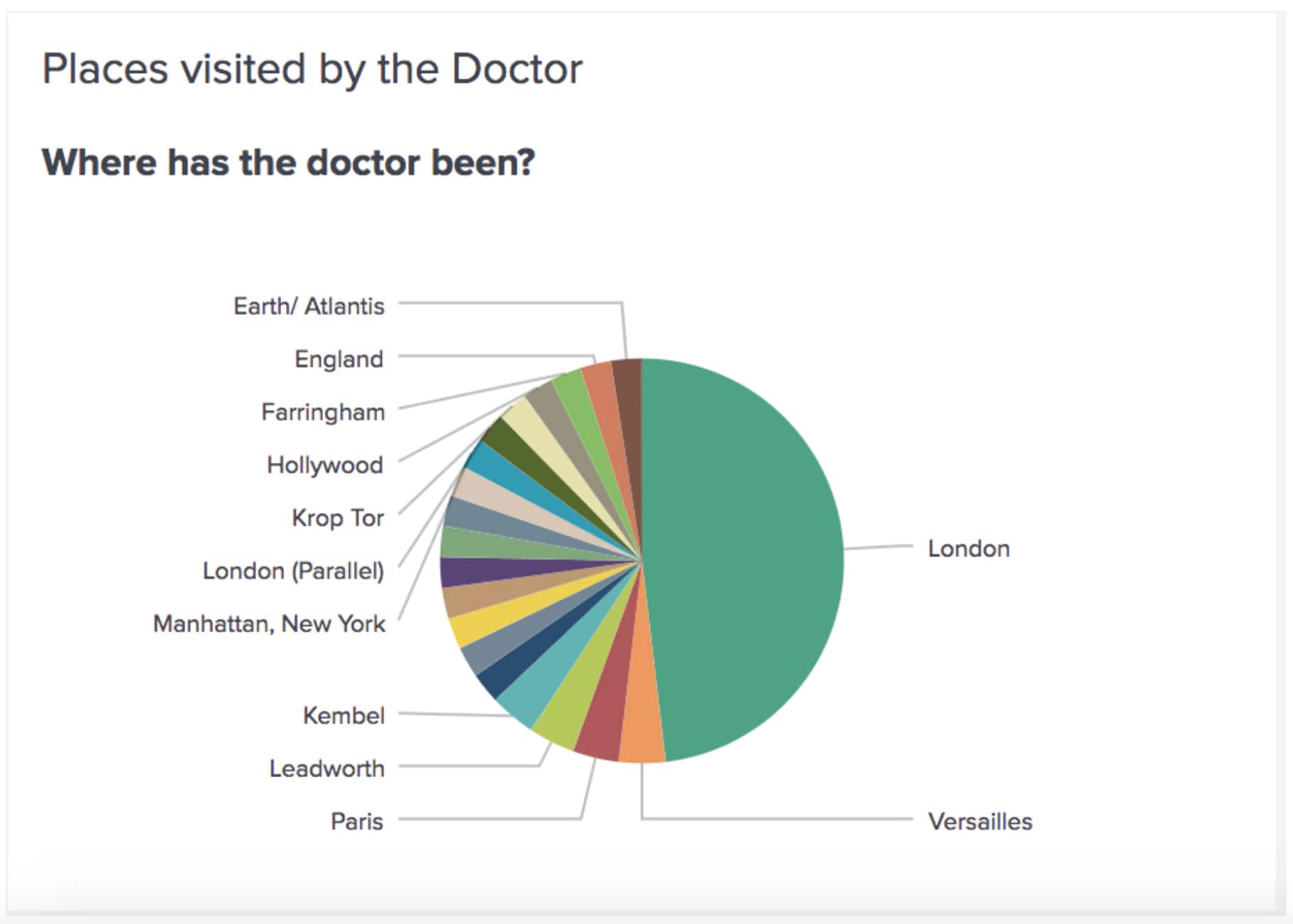 Along with Cybermen, The Doctor’s arch enemy is the Daleks (think seven-foot, robotic, studded dustbins, firing disintegration rays from plunger-like guns, shouting “exterminate!”) Having explained the Daleks so eloquently to my daughters, I turned to Splunk to see how many times they’d featured in the show. ‘The Daleks’ Master Plan’ was a twelve-episode run, and that’s why it features so prominently in the pie chart below. Last but by no means least, as we’re travelling in space (and time), I wanted to make the Doctor Who dashboard “more sci-fi”. Only one thing for it - the new “dark mode” in Splunk Enterprise 7.2! 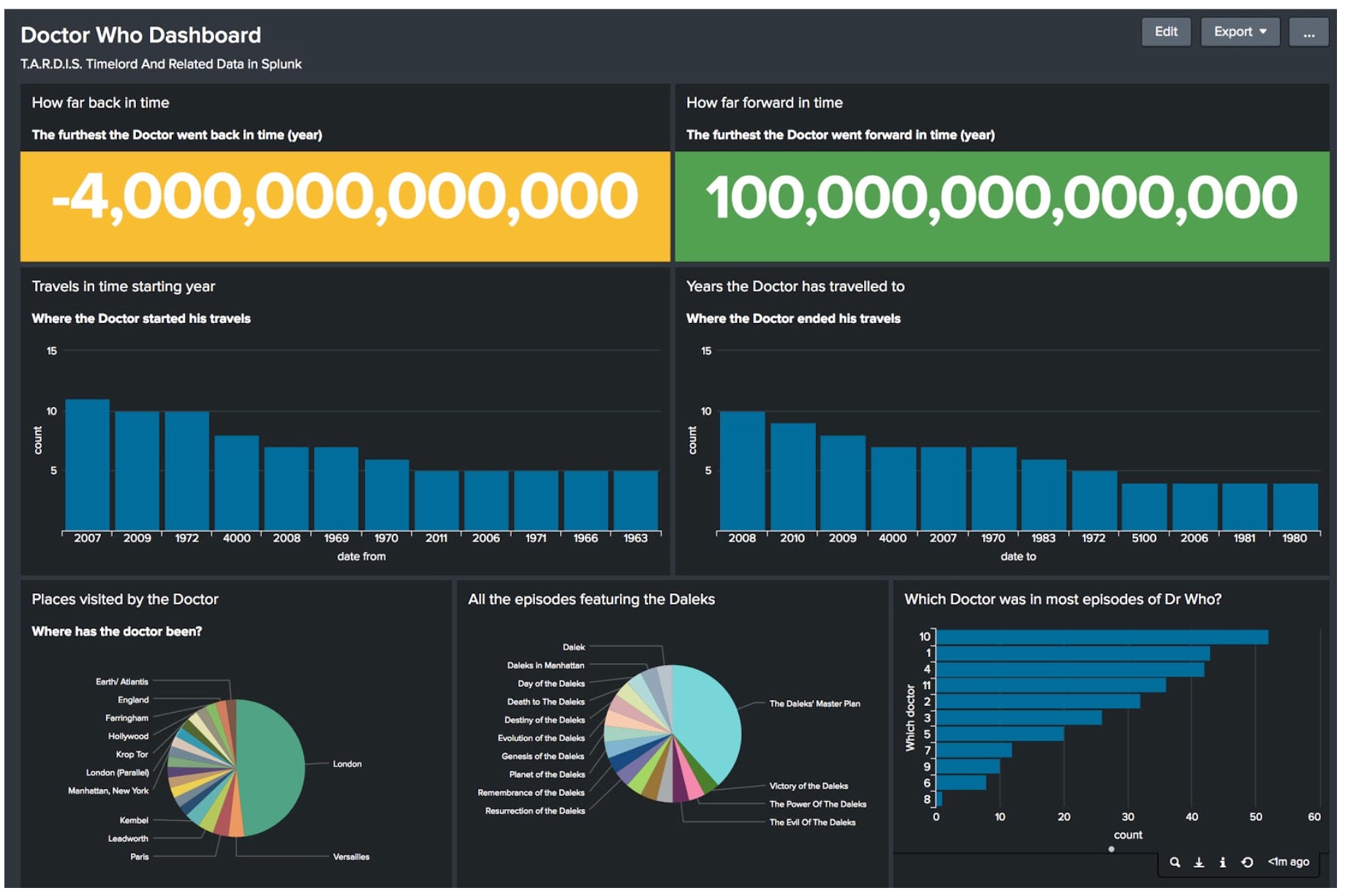 Perhaps the closing word should sit with UK Splunker, Mark Sivill who built a fantastic dashboard as part of his interview to join Splunk. What you can see in the video below is a Splunk dashboard that moves the TARDIS. across the five screens in the Dr Who meeting room in the London office.

If you want to find out more about Splunk for Cyber(men)Security, how to “exterminate” outages, or just to travel in time (series data) then simply click here.

As always, thanks for reading.