Open data has become all the rage, and while governments at the local and state level have aggressively moved to release vast quantities of data, the White House is clearly leading the charge. With more than 100,000 data sets, data.gov has become the mother lode of open data. But how to make sense of all of this data? Why, by Splunking it, of course.

eRegulations Insights was announced this morning and developed in response to President Obama’s call for technology leaders to help harness the power of open data through collaboration and public-private partnerships.

Public data projects are a big part of what we do, and naturally we try to find interesting ways to drill into open data to both make it more useful to both policy makers and the public. Brought to you by Splunk and Splunk4Good – the corporate social responsibility program for Splunk – eRegulations Insights was conceived and designed by the inquiring minds of our very own Splunkers (think chief minds and Splunk ninjas) using Splunk Enterprise, and is available now at http://eregulations.splunk4good.com.

eRegulations Insights is a set of public dashboards and visualizations designed to help decipher the tone of public response to regulatory proposals. Users can explore different agencies, proposals, the volume of public comment by agency and regulation, issues of concern addressed in public responses, and even primary community influencers that are mobilizing public engagement around a proposal. 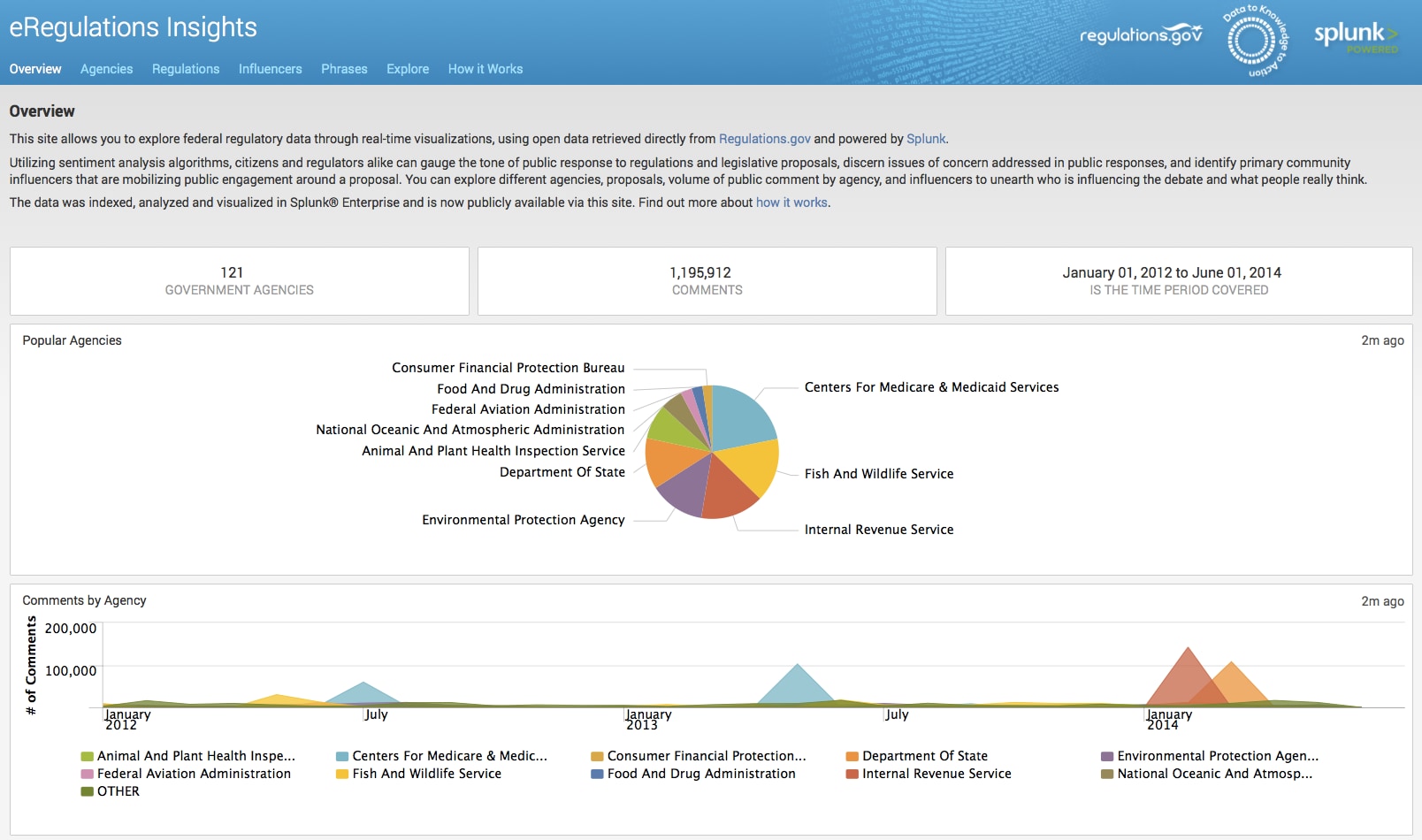 eRegulations Insights taps into nearly 1.2 million comments received by federal agencies since the beginning of 2012.

The dashboards are completely open to the public, and are designed to bring greater insight and visibility to the black box of public comment. This site taps into nearly 1.2 million comments received by federal agencies since the beginning of 2012 – and helps to make that information more useful and easier to understand. In short, we wanted to improve how the information could be used to ensure that it gets used.

Some other interesting findings:

Public comments can be driven by unexpected influencers, including coordinated online campaigns via Facebook and other sites.

What’s next? What does this all mean?

While we used the open data API from Regulations.gov to Splunk public comment from federal agencies and to build eRegulations Insights, this is far from the only application. This type of approach – real time analytics on public comment and other public discourse – could have very real implications at all levels of government. Public officials and regulators constantly grapple with the realities of public participation and how to improve engagement beyond a determined few. Public meetings frequently feature the same cast of characters, comments are submitted by those with a vested interest, and ultimately public comment is limited to those with the time to attend public meetings or the means to influence legislation.

But what if legislators and regulators had real time access to public comment, and the ability to effectively digest the data in a way that could help them make better use of public comment? Perhaps they could expand on the very concept and use public comment as a way to actively inform public debate, leverage channels such as social media, and improve civic engagement on important public issues?

In effect, applications such as eRegulations Insights can help provide public officials and citizens alike with the resources they need to truly make governments more efficient, more responsive, and more accessible – many of which might already be in use in their organizations. Tools such as Splunk – in use for other purposes in hundreds of public facing organizations – could be repurposed to help make the public process more open. As local and state governments grapple with the challenge of making public meetings more accessible, officials often hesitate to open online public comment for fear of being inundated with information without the means to constructively process the dramatically increased volume. Visualizations and analysis of public sentiment, influencers, and even social media could help remove organizational obstacles to precisely the openness and transparency that people are clamoring for.

Government agencies can use this information to gauge people’s interest in an issue, see who is driving traffic and activity, and to decipher the tone of the public conversation. All in real time and 100 percent available to the public. And they could use that information to improve the transparency and quality of important public discussions. Let’s leverage the wealth of open data we already have, which in combination with these new technologies can dramatically improve the quality of our public processes.

Special thanks to our friends at Regulations.gov

None of this project would have been possible – nor any of the insights achieved – if it weren’t for the fine folks at Regulations.gov. This amazing repository of open data magic is expertly managed by the Environmental Protection Agency, and contains a wealth of information. The Data to Knowledge to Action initiative instigated this conversation, and our friends at the National Science Foundation and White House Office of Science and Technology Policy have been active supporters in the development of this site. Thank you!

Corey Marshall is the director of Splunk4Good, the corporate social impact program for Splunk, where he leads the company’s efforts in employee service and engagement, community giving and social impact initiatives. Splunk4Good partners with organizations at the local, state and federal levels to leverage data in support of initiatives such as disaster response and open government, including the recently announced $100 million Splunk Pledge to support nonprofits, research and education. Corey has spent more than 15 years advising governments on open data, public-private partnerships, data-driven decision making and improving transparency and accountability, including roles with the City and County of San Francisco, Accenture and the office of Chicago Mayor Richard M. Daley. He has served on public and nonprofit boards, provides pro bono consulting to nonprofits, and currently focuses his volunteer time on sustainability and leveraging data and technology for social good.