It's just walking, how hard could it be?

It was a warm & sunny Friday morning in Melbourne, Australia, when four Splunkers (well, three and a former) took their first confident steps onto the Oxfam Trailwalker course.  It was a trail that would stretch 100km (that’s 62.14 miles for you Imperial folks) from the edges of Melbourne city through the hills & dales of the Dandenong Ranges, finishing in the beautiful Yarra Valley. The team had set a goal of 30 hours to complete the trail, well inside the maximum allowed 48 hours.

But this is a story that starts some six months prior, when an enthusiastic Sydney sales engineer asked for expressions of interest in putting together a team or two to take on the challenge. He was met with reactions ranging from “no way, you’re insane” to “it’s just walking…how hard can it be?” Over the ensuing months, the makeup of the teams fluttered and fluctuated, until about 5 weeks before, when some entrants realised that a) 100km is a really long way; b) they’d done more drinking than training; and c) 100km is a really, really long way. The Uptown Splunk team settled on its final four members – Simon & Amanda from Splunk Brisbane, Nick from Splunk Melbourne, and Ed, a former Sydney Splunker. In a slightly suspicious twist, the originator of the plan found he was “injured” a couple of months before, and unable to join the team on the trail.  A likely story. 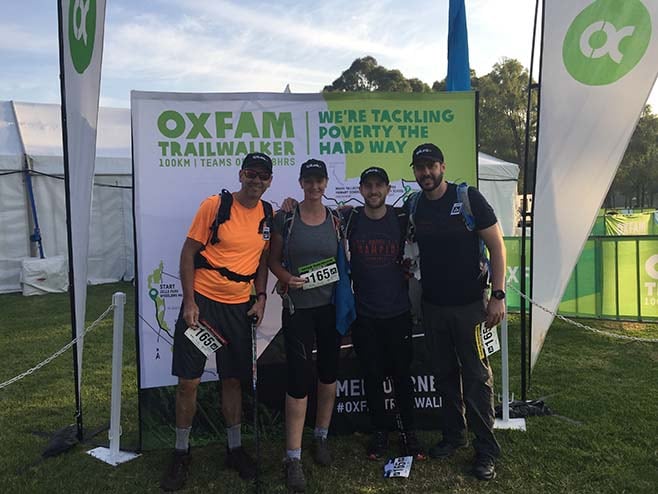 The team headed off in the 8.30am wave and being stuck at the back of the pack for a while, set a pretty conservative pace. Checkpoints 1 (12.4km; the one with the Nutella sandwiches), 2 (21km; the one with the ham sandwiches) and 3 (31.7km; the one with the sausage rolls) passed by without incident (or blisters!), and the team was in high spirits.  A few deep breaths, then up the first real test of the trail, the notorious Thousand Steps (a Kokoda Track memorial) and some long, long hills up into the normally serene little town of Olinda (42.6km).

Having achieved their first walking goal of hitting Olinda by dusk, the team filled up on some hot food, picked up their night walking gear, and headed off into a long night.  The monotony of the dark, flat kilometres of track was relieved by some happy tunes, and some surprisingly lucid conversation about the Splunk Adaptive Response framework! Checkpoint 5 (58.1km; the one with Herman the German’s hotdogs) and Checkpoint 6 (71.3km; the one with the piping hot jam donuts) came and went, and photographic evidence shows the fatigue and foot pain starting to kick in.  Not quite the happy faces from the start line! 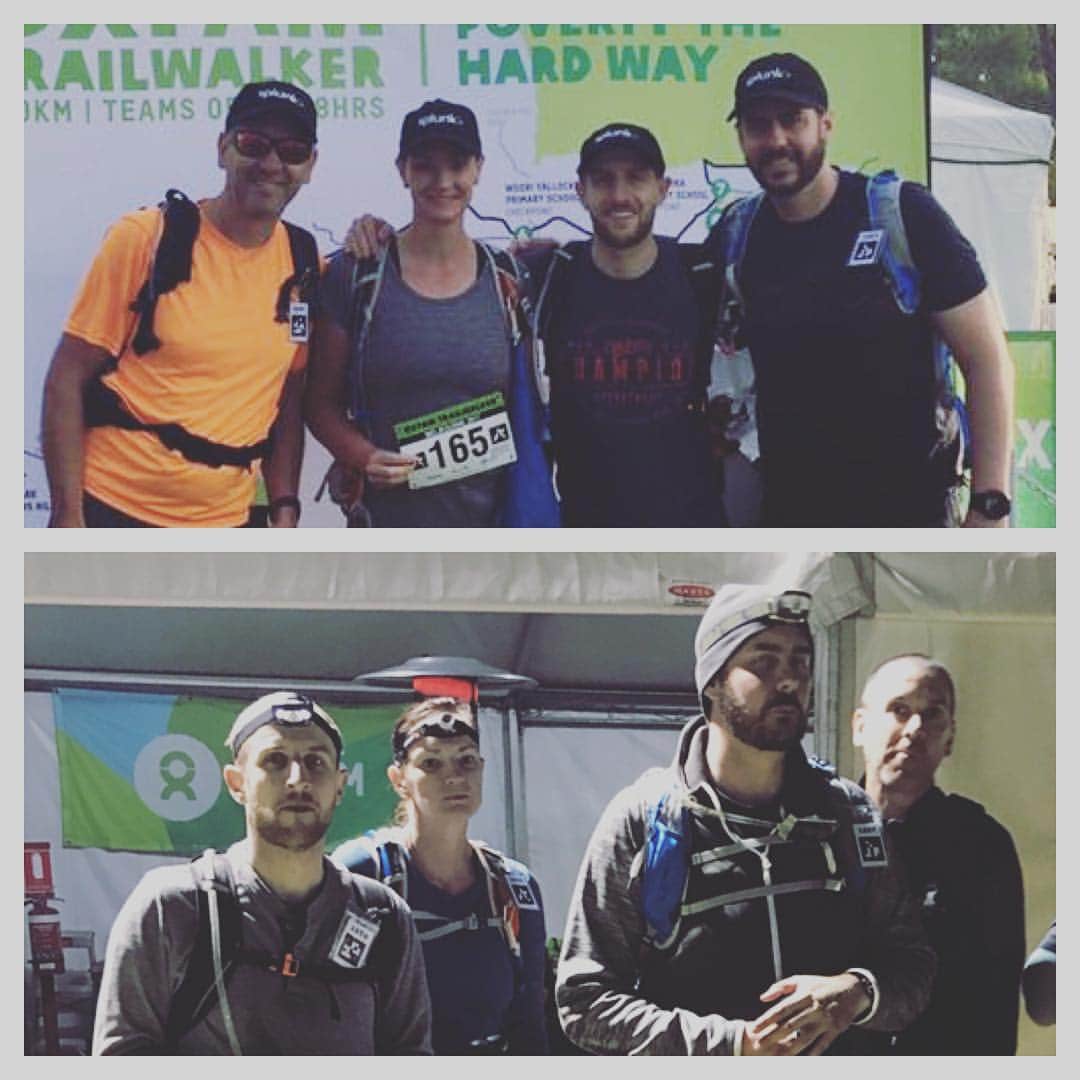 By Checkpoint 7 (84.6km) the cracks were starting to show.  Everyone had really sore feet, and Ed’s right knee was starting to play up, making it very difficult for him to walk down hills, of which there were plenty.  It was time for the Splunk ANZ spirit of teamwork, determination and good humour to kick in, and get the walkers home!

The final section was a tough one, there’s no doubt about it.  With 85km already under their feet, the team was faced with some horrible hills between them and the finish line, where hugs and cold beer awaited.  Ed resorted to walking down the hills backwards to relieve the pressure on his knee, and the other three stumbled onwards with burning feet & glazed eyes.

Then, finally, after 26 hours and 18 minutes on the trail, the finish line was in sight.  The team were welcomed down the arrivals chute by a cheering support team, were handed a cold beer and a seat in a beanbag, and gratefully removed their hot, smelly shoes. Success! 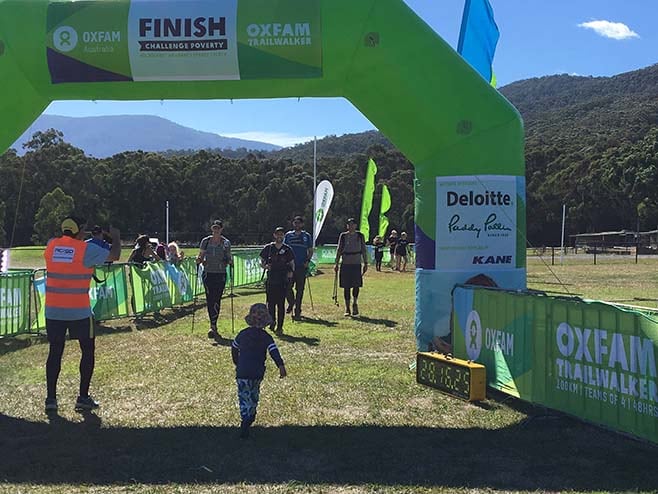 The Oxfam Trailwalker event takes place in seventeen cities in nine countries and raises money to support Oxfam’s work around the globe, assisting people living in the most abject of poverty.  All Australian teams must raise a minimum of $1,400 AUD to participate, and Uptown Splunk had set an initial target of $3,500. When this was achieved with a minimum of effort, a revised target of $5,000 was set.  At the time of writing, the team has proudly raised $10,866, and takes this opportunity to send a huge thank you to the approximately 124 generous donors who gave to the cause.

At each Checkpoint, the team was met by a phenomenal support crew, made up of fellow Splunkers and the wife of one of the walkers.  They fed, watered, hugged, bandaided and encouraged the team at every stop, and without them, the team would never have been able to make it through! An enormous thank you to Ryan, Tash, Alicia & Katrina!

Some interesting stats about the Melbourne event:

And because this wouldn’t be a Splunk Blog without some Splunky goodness, here’s some dashboards representing the effort of the team, as captured from Simon’s Garmin during the event.  As you can see, there were a few tracking issues over the course of the event!

Thanks again to all the supporters of the Uptown Splunk team!

I am a Sales Engineer based out of Brisbane, Australia. I live in the best place in the world, and have the best job in the world.

It's just walking, how hard could it be?